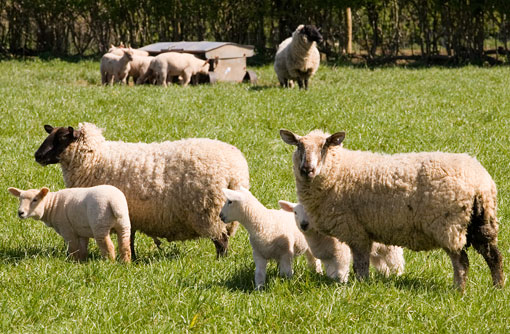 Responsible worm control and selecting for worm resistance were topics up for discussion at a recent Sustainable Control of Parasites in Sheep (SCOPS) day at Waterend Farm, Dursley. Aly Balsom and Gemma Mackenzie report

To ensure the future sustainability of the sheep industry all producers should be implementing targeted worming in response to faecal egg counts (FEC) as a bare minimum.

Worming only when and where needed will help reduce labour inputs, prevent a build up of resistance and increase productivity – a benefit recognised by Gloucestershire producers Hilary and Richard Mann.

Independent consultant Lesley Stubbings explained to delegates that worm control was part of a strategy that has helped the couple achieve top performance figures in their flock of 230 commercial ewes.

The flock of Suffolk x Mules and Texel x are achieving a true lambing percentage of 170% with 100% finished at E, U and R grades and 94% falling within the target for carcass weights and 80% in the premium grade spectrum.

“This is a challenging farm for worm control. It is made up of permanent pasture and continuously stocked with sheep at a relatively high stocking density. However, these are issues faced by most sheep producers,” said Ms Stubbings.

“The Manns need to achieve a high lambing percent and they want lambs gone as quickly as possible, otherwise there will be a knock-on effect on lamb finishing. Lambing dates are also very important to fit in with the bed and breakfast business – worm control is all part of achieving this performance.”

Producers should start with a FEC to identify if they have a worm problem and work from there, advised vet Katie Essex.

“Some farmers worm lambs every 3-4 weeks as standard, but the aim should be to worm purely based on FEC results.”

In general, FEC should be carried out on lambs every 4-8 weeks from six weeks of age and ewes tested at and around lambing. This is when their immunity is at its lowest and they will be producing their highest output of eggs.

A basic drench test can then be carried out on faecal samples 7-14 days after drenching (depending on product) to see whether resistance is an issue. At this time, egg counts should be zero. When counts are an issue, a FEC reduction test can be carried out on individual animals to identify specific resistance problems.

“FEC and drench tests are the very basics that should be carried out by all sheep producers,” said Ms Essex.

As one of 30 farms involved in a SCOPS trial, Waterend Farm has been able to improve worm control strategy. One area of improvement has been a move away from using white drench after identifying resistance.

Now, 90% of ewes are wormed using a clear drench with persistent activity in the lambing pens so as to reduce pasture contamination. FEC are then carried out on lambs every 4-8 weeks. In between these set times, if Mrs Mann is worried she will FEC again to see whether worming is appropriate.

The idea now is to keep an eye on stock and see how they are performing. Dirty bums can be caused by a wide range of things, not just worms, so it’s important to establish the reason, said Mrs Mann.

“Because we worm only based on FEC, there are some lambs which will never have been wormed.” And by doing FEC, it is rare that lambs need to be wormed before July meaning that worming is a fraction of past treatment regimes.

Last year lambs were wormed using a clear drench, but this year an orange drench may be used.

We know we have resistance to two to three groups of wormers on this farm, so we need to work out a strategy to integrate the new orange group. The farm will also continue to worm based on FEC, said Ms Stubbings.

I was surprised in a way that we had resistance to white drench, said Mrs Mann. “It is not until you carry out a resistance test that you know if you have a problem. Without doing so, you could be compromising performance without knowing it.”

We’ve lost the battle with white drench on this farm, said Ms Stubbings. “In fact, on most farms white drench will only be relevant for nematodaris control because of a build up of resistance.

“At Waterend Farm we also need to be careful with the yellow group and understand where it is relevant to use it, otherwise we could get problems with resistance.” Selection pressure also needs to be addressed with the clear group to prevent future problems.”

The next step will be to integrate the orange wormer. This will be done carefully and on the basis of FEC monitoring in lambs to prevent resistance. Such responsible management is crucial with new wormer classes to prevent any future resistance problems.

“The key is to talk about the right product for the right time. As an industry, we can’t afford to sit back and let resistance overtake us and get to a stage where we can’t keep sheep,” said Ms Stubbings.

“Many farmers will be in the same position as Waterend Farm, but will be unaware of it. The whole crux is because we know where we are, we can make plans for the future.”

Ms Stubbings said future resistance to worms was reliant on “bringing in different genetics”. She recommended the use of worm-resilient rams for ewes producing lambs for slaughter, and worm-resistant rams for breeding ewes.

“A sheep that is genetically resistant to worms means a sheep that can allow worms in, but stop them from establishing in the gut, resulting in less paddock contamination. Breeding this kind of resistance into the animals that are going to be slaughtered is not going to get us far, but we can breed it into our breeding ewes.

“It isn’t a short or medium-term fix, and it probably takes about 14 years before you see any real tangible benefit, but it’s certainly worth doing.”

She said breeding for resilience – a worm-resilient sheep continues to perform, despite the presence of worms – was also possible and would be beneficial for ewes producing lambs for slaughter.

“It’s not about saving money, it’s about getting really good performance from the lambs and ensuring the long-term sustainability of being able to control worms on the farm,” she said.