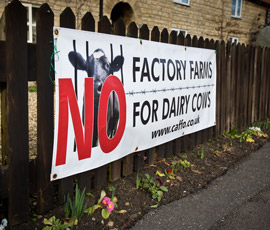 The debate around so-called “mega-farms” must focus on science rather than emotion if farmers are to produce more food sustainably, an expert has warned.

Too much emphasis was placed on the perceived welfare and environmental issues associated with large-scale livestock production, said Chris Warkup, director of the Biosciences Knowledge Transfer Network.

But Mr Warkup said more science had to be brought to the discussion so decisions by planners, retailers, policy-makers and consumer could be based on fact.

He was speaking at the British Society of Animal Science large-scale livestock conference, held on 23-24 May at the Roslin Institute, Edinburgh.

“So far the debate has been around emotion rather than evidence,” he told the Does Big Mean Bad? event which is examining the science behind large-scale livestock production.

“If people are to make a rational decision about large-scale systems we need to have a subjective assessment of the evidence we do have, as well as a discussion about where more research needs to be done.”

“If people are to make a rational decision about large-scale systems we need to have a subjective assessment of the evidence we do have, as well as a discussion about where more research needs to be done.”
Chris Warkup, director of the Biosciences Knowledge Transfer Network

While some potential impacts of large systems still needed to be examined, Mr Warkup said it was wrong to automatically assume big meant bad.

“The debate has been side-tracked to being solely about perceptions of welfare and environmental impact, but the reality is much more than that: it’s about the sustainable competitiveness of food production.

“Both large and small farms have the ability to deliver excellent welfare and environmentally sustainability.

“The advantage of larger farms is economic sustainability thanks to economies of scale.”

But any development of large-scale farms did not spell the end of small, family farms in the UK, Mr Warkup added.

“Small farms have a future, provided they innovate and create something which demands a premium from the marketplace.

“If you can’t benefit from economies of scale you need to get a higher price from your product, which means being a niche supplier of something such as a regional cheese.

“Large farms could also help preserve British agriculture, keeping alive the country’s industry rather than seeing us import out food from countries where producers are getting bigger and more competitive.”