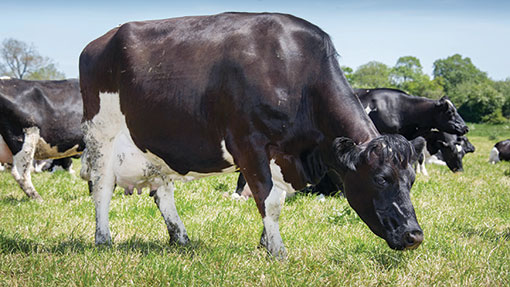 A regional monthly round-up of key veterinary issues from members of the XL Vets group.

We are seeing more cases of milk fever in cows calving outside. Unfortunately, grass is usually high in calcium and potassium, which is not good for milk fever control.

If you start to have a high number of milk fever cases, the first step should always be to change the forage being fed to the dry cows in their last two weeks of pregnancy.

Housing cows, changing fields, introducing conserved forage such as maize silage or wholecrop, or using silage from another clamp can often stop an outbreak. Using paddocks of long-lived grass that has had no slurry or potassium fertiliser applied will reduce the risk of milk fever in cows calving outside.

Oral calcium, either by boluses, drenches or pastes, is a better way to treat at-risk cows. They last longer and avoid unsightly injection lumps.

Vasectomising rams is the current seasonal job. It always seems to get forgotten, then ends up being a rush to get them done soon enough for the teasers to become infertile before their outing in advance of the real boys.

Using teasers is often overlooked as a method of tightening up lambing and slightly advancing it at little cost. We are also spending some time sorting out the feet of working rams, with contagious ovine digital dermatitis appearing to be on the increase and traditional lameness causes ever present. It is a good time to spend a little on rams, ready to reap the rewards next spring.

Silaging and other field work is dominating farmer workloads, but it is important not to overlook stock. Prompt attention to ill animals can be the difference between life and death, however problematic it may be to bring it in from a field.

This also applies to lameness, where, if left untreated, foot abscesses can easily lead to septic joints and even death.

We have also seen a number of dairy cows in recent weeks suffering from energy imbalance and displaced stomachs.

Controlling their diet is more difficult when they are outside so regular ketone sampling of freshly calved cows can be very helpful to detect problems early, preventing metabolic upsets and keeping cows in full production.

We are seeing a lot of new forest eye problems in cattle caused by a bacteria called Moraxella bovis. It is spread by flies or close contact – so fly control is crucial.

Using treatments early in the season before flies become a problem keeps the population down. Avoid damp and sheltered areas by water and under trees, where the problem is worst.

Early treatment with antibiotic ointments under the eyelid or antibiotic injections generally gives a good cure, but more advanced cases with significant damage to the surface of the eye may take repeated treatments or may result in permanent scarring or blindness.

If you have a particularly bad outbreak, it is worth checking for underlying disease such as infectious bovine rhinotracheitis, which may make animals more susceptible.