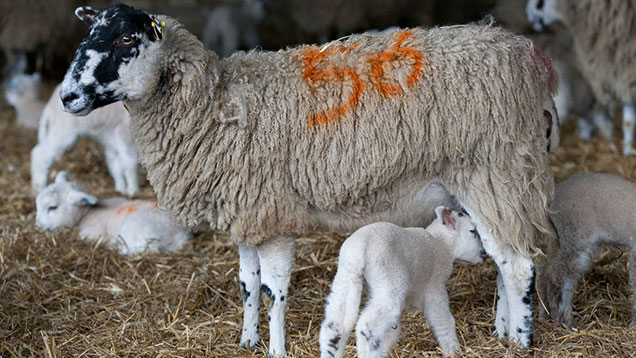 Our four vets hand out some important advice ahead of lambing and discuss the necessity of body condition scoring.

Body condition scoring (BCS) ewes and cows before they give birth is a vital tool to help reduce metabolic and physical problems before, during and after birth, promoting optimal reproductive performance.

More than 90% of sheep in most flocks should be BCS 2.0-3.5. Ewes with multiple lambs and low BCS need to be fed quality fibre and supplementary concentrates to avoid twin lamb disease.

Beef and dairy cows need to be BCS 3.0 prior to calving. Group overfat or thin cows and feed accordingly to reduce ketosis risk.

We have seen a lot pasteurellosis in sheep over these past few weeks. With lambing under way or rapidly approaching farmers are reminded to boost their ewes in the run up to lambing with Heptavac-P (the combined clostridial and pasteurella vaccine).

This acts as an aid to control clostridial disease and pasteurellosis in their lambs, as long as they receive sufficient colostrum during those first few hours of life.

The immunity to pasteurella that lambs get from colostrum only lasts about a month.

E coli bacteria come from dirty environments and faecal staining of the ewe’s wool in areas encountered by the lamb searching for the teat. Poor or delayed colostrum intake allows E coli to proliferate, causing problems. Lambs can be lifeless and dull, reluctant to suck, have a wet lower jaw and abdominal distension despite not sucking. It is very serious and, untreated, often leads to death.

While prompt antibiotic treatment is essential in outbreaks, prevention is always better than cure. Hygenic lambing areas and adequate colostrum intake are key.

January has seen a new phase in the Scottish Bovine Viral Diarrhoea (BVD) eradication scheme. It is time to reflect on current that BVD eradication poses in areas of high cattle movements.

If buying store cattle, are they from a screened negative herd? If buying in heifers that are either in-calf or that have calves at foot, are you certain she has not come into contact with BVD prior to service or during the first trimester of pregnancy? This could result in the birth of a persistently infected (PI) calf which frequently fail to thrive.

With margins under increasing pressure and any available efficiencies being sought, you don’t want a PI animal in your herd. If you have any doubt about your BVD status, talk with your vet.