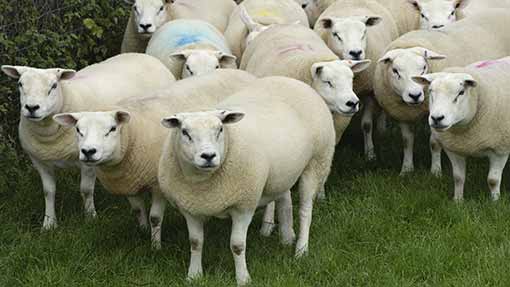 A regional monthly round-up of key veterinary issues from members of the XL Vets group.

Routine monitoring is a vital component of adequate parasite control in sheep and we are used to seeing stomach worms and liver fluke. This September we encountered an unusual suspect with levels of 4,500-6,500 eggs/g of faeces. The culprit, a sheep tapeworm called Monezia expansa, uses a harvest mite to complete its lifecycle and at 1-6m long, looks like it fills the intestine. However, as they only attach at one point in the gut, they do little damage to the sheep. We were able to advise our client and save the time and expense of unnecessary treatment.

Of greater concern for sheep are the immature form of dog (or fox) tapeworms such as Taenia ovis, as these can lead to cysts in the lungs, liver and muscles. This can result in lambs being condemned at slaughter. Control means regular worming of dogs and not allowing dogs to scavenge sheep carcasses.

Calf scour is an issue on some dairy units all year round and this summer has been no different with farmers reporting several losses and many calves requiring treatment. Testing should be carried out to identify the pathogen responsible for an outbreak as specific preventative measures are available for certain causes. However, some general principles always apply:

With early analyses of first cut silage showing some poorer quality examples with less than optimal energy levels and having seen numerous “colicky cows” in the past few weeks, it has become ever more important to pay attention to the presentation of your ration.

To maximise intakes, a feed space width of 70cm a cow is advised and all efforts should be made to avoid any bullying. Dead-end passages should be avoided and feed passages should be wide enough to allow two cows to pass behind the feeding cows. Water trough space is vitally important with 10cm a cow recommended.

Feed space width becomes irrelevant if the diet isn’t palatable. Pay careful attention to keeping the silage fresh and the clamp face sharp to avoid unwanted spoilage. It may be worth feeding poorer quality first cut silage to lower priority stock and keeping the best ration for the high yielders.

It’s been a fantastic year down here in south-west England, both in terms of weather and grass growth. When the weather’s good, all animals are healthy and there is no work to do, farm vets sit around and worry about the future of their business. My father was a farm vet before me and he said exactly the same.

But there’s something wrong this year. We barely have time for a single cup of tea. The doughnuts remain untouched.

We have had an endless succession of sick cows. Mostly after calving and mostly displaced abomasums (DA) and it is very evident when we open them up that there is excess fat in the abdomen.

It would seem that the summer has been “too” kind to these cows and they are laying down too much fat, which is kicking off the DAs as well as other complications relating to fatty livers.