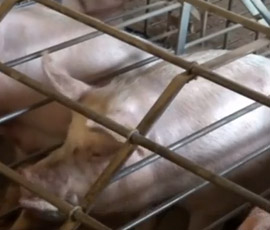 The charity has released footage which it claims shows injured pigs huddled in overcrowded environments and unable to move with ease.

According to CIWF, the pigs had severely docked tails and were standing in flooded waste and lying in their own excrement. The group added that the lack of enrichment left the pigs continuously chewing at their bars for stimulation.

And the group claimed that outside the farms were pig bins full of dead pigs and some appeared to have been there for a long time with maggots feeding on the dead flesh.

CIWF chief executive Philip Lymbery said in the wake of the recent horsemeat scandal, the “shocking” images were a reminder that even some animals that provide unprocessed meat have had a horrendous life.

“Bins full of dead pigs being eaten by maggots; piglets lying in their own filth; pregnant sows kept in sow stalls, so narrow that they cannot even turn around: this is a horrific reality check,” he added.

All of the fattening pigs seen on the nine farms had their tails docked and may well have been subject to other painful and routine mutilations such as castration and teeth cutting, said CIWF.

The pigs directive lays down minimum standards for the protection of pigs in the EU. One such standard is the partial banning of sow stalls as of January this year.

But the charity said sow stalls were a “cruel reality of factory farming” and, as the investigation showed, were still in use in Spain.

In addition, millions of fattening pigs continue to be illegally kept indoors in barren housing, with little or no bedding and a lack of suitable enrichment.

Mr Lymbery added: “We must do more to ensure that pigs are treated as the sentient beings they are. What use is a directive if we don’t follow it throughout the EU? This footage shows that the commission must do more to enforce the pigs directive and penalise those flouting it.”

“Some countries such as Italy and Spain have convinced the commission that they are compliant when we know discussions with their own producer groups suggest that’s not the case.”
Zoe Davies, National Pig Association general manager

Sow stalls were banned across Europe from 1 January this year – except for the first four weeks of gestation. The practice has been outlawed in the UK since 1999.

Zoe Davies, general manager of the National Pig Association, said she believed some major pork producing countries, which sell pigmeat to the UK, were still flouting the legislation on sow stalls.

“Some countries such as Italy and Spain have convinced the commission that they are compliant when we know discussions with their own producer groups suggest that’s not the case,” she added.

Although she did not condone illegal filming on farms, Dr Davies said it was good that CIWF were investigating countries signed up to the ban, such as Spain, to see whether they were compliant.