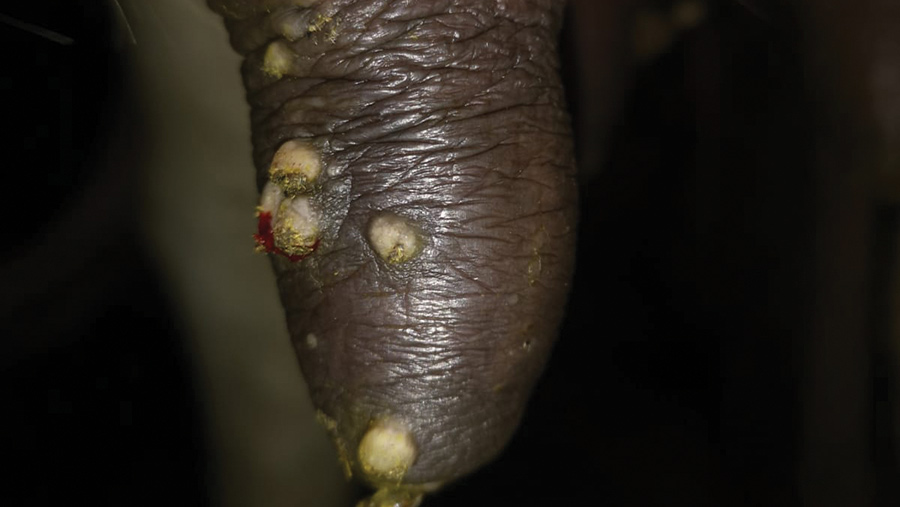 Warts on cow teats are unsightly and they can impact negatively on herd health and performance, growing in size and number to a point where they prevent a cluster sealing itself around a teat at milking.

Although most animals will rid themselves of warts naturally over a period of six to 12 months, they are highly infectious.

This is because the surface of the wart is covered with virus particles which are left behind on surfaces and picked up by other animals. The virus can also be transferred via teat cups and milkers’ hands.

In severe cases, culling might need to be considered, but treatments are available. Vet David Staak of the Market Hall Vets, St Clears, gives advice.

Warts are caused by a papilloma virus and, like any virus infection, until the animal has been exposed to the virus, it will not have antibodies to it.

This is the reason why warts are more common in younger animals.

Once the animal mounts an immune response, it will make antibodies, reject the warts and from then on the animal is usually protected for life.

How does it affect animals?

Some animals are more severely affected than others.

The warts can form on any surface of the body where there is skin, but they are more likely to occur in the area where animals have contact with each other or areas where they lie down.

Warts are therefore more likely to be found in areas like the head and neck, because young animals will often rub up against each other. The belly, udder and teats are also affected because animals like to lie in the same area.

In older cattle, papillomas are usually confined to the udder and teat. These provide a good point of entry to basal epithelial cells, the cells that the virus infects.

What problems can result from warts?

The virus particles are very hardy and will withstand the elements for quite some time.

Some heifers have their teats covered to such an extent that it might be difficult to fit clusters over them.

Occasionally animals are very severely affected and intervention is necessary to reduce suffering.

Can you prevent warts?

Wart infections are dictated by the amount of virus the animal receives, and its level of immunity.

Other diseases and mineral deficiencies can cause immunosuppression, and this will have a direct influence the number of animals affected, and the number of warts appearing on each animal. Therefore, good disease control and nutrition is key.

Can you get rid of them?

With this in mind, some vets recommend crushing the warts to induce an immune response:

Largish warts
Largish warts can be removed with rubber rings or by numbing the area with local anaesthetic and using a burdizzo castrating device; this is a procedure which should always be carried out by a vet.

Smaller warts
In cases where there are large numbers of smaller warts and these are widespread on teats, some vets will make a homemade glycerine-based teat dip to apply as a thick crystalline layer.

This slowly cracks and possibly damages the warts, initiating an immune response.The exact mode of action of the teat dip isn’t known however and it would be difficult to recommend its widespread use, given that it does not have a veterinary licence.

Vaccine
Many UK veterinary laboratories can produce an autogenous vaccine for single animals and these don’t need a veterinary licence. This process involves fresh warts being removed from the affected animals and sent to a laboratory where they are pulverised and a vaccine produced.

The vaccine is then injected back into the affected animal. This can be very useful for individual animals that are valuable, but it is possible to obtain a licence from the Veterinary Medicines Directorate (VMD) to use the vaccine on multiple animals on the same holding.

For a vaccine to be effective, it is important that a sufficient dose is administered and for it to be given for a sufficient period of time – a vet can guide on this.

Other remedies
Other remedies that some farmers find effective are a 50/50 solution of hypochlorite and water sprayed on to teats or liquid nitrogen applied to the warts.

Rubbing castor oil on to the warts can also be helpful.

As with all non-proven treatments, some remedies can be very successful on some animals but don’t improve the condition in others.

Farmers should speak to their vet to find out more about autogenous vaccine production, but it is certainly worth knowing that there are options for valuable animals.