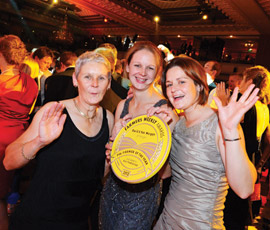 One lucky sheep farmer could win two tickets to the 2013 Farmers Weekly Awards at The Grosvenor House Hotel in London by simply filling out a short survey on sheep lameness.

As part of the next stage of Farmers Weekly‘s Stamp out Lameness campaign, we are asking sheep farmers across the UK to complete an online survey to establish lameness incidence one year on from the launch of the campaign.

The initiative was launched last year in response to the Farm Animal Welfare Council’s Opinion report which recommended the industry reduce sheep lameness to 5% or less by 2016.

This year, Farmers Weekly together with MSD Animal Health is running a four-week, farmer case study-led series to further tackle this huge welfare problem, estimated at costing the industry £24m a year.

By taking part in the survey, you could be in with a chance of winning two tickets to the farming industry’s premier awards ceremony, taking place on Thursday 3 October.

Fill out the survey at www.fwi.co.uk/stampoutlameness

Find out about the Farmers Weekly Awards