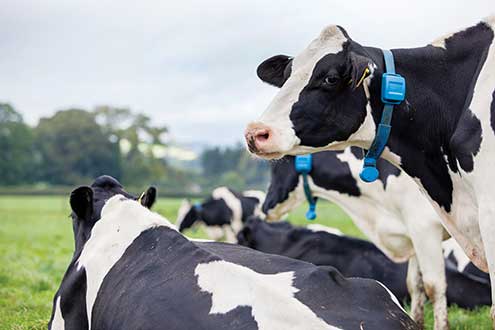 Getting a cow in calf at the right time is a key driver of profitability for any dairy herd. But as a herd expands it can become increasingly difficult to effectively observe cows bulling.

This was the problem faced at Gelliargwellt Farm, Gelligaer, when dairy farmer Paul Price decided to double cow numbers.

Previously farm staff at the 640-cow herd, based in mid-Glamorgan, carried out regular visual checks to observe signs of bulling.

“We tried to work it so that everyone on the farm had a pen and book and they would note anything down they thought suspicious,” explains Mr Price, who farms in partnership with his brother Alan.

But as cow numbers rose, heat detection rates fell, with Mr Price admitting they often missed heats or incorrectly identified cows as bulling. And that was just scratching the surface of the problem.

Delving a little deeper, Mr Price realised low pregnancy rates were creating a “vicious cycle” of problems within his herd.

Cows not pregnant before 120 days in milk became stale and in order to maintain milk yields Mr Price was feeding more, but this was only exacerbating issues, with affected cows mobilising energy as fat, which created metabolic disorders post calving.

“Extended lactation cows are less profitable because they will be doing more days in milk at a lower daily yield,” explains Mike Halliwell of Five Star Breeders.

Mr Price toyed with the idea of installing a heat detection device for almost two years, but initially decided against it in favour of a synchronisation programme.

“I thought it would be another job and I’d spend more time in the office and not with the cows.”

But after just five months he realised costs on the programme were spiralling out of control – he calculated it was going to cost nearly £75,000 for 12 months. In May last year Mr Price decided to install Cogent’s Pin Point heat detection programme.

At first he was sceptical and he thought it would be no match for tried and tested experience. He admits he often thought he’d outwitted the system, only to be disappointed when he checked the computer.

But just six months in, the programme has already shown signs of significant progress. Submission rates have increased from 40% to 70% and cows are being identified as returned from service more accurately.

“Non-return rates being low isn’t necessarily a good thing”, explains Mr Halliwell. “If you’re not picking up cows that have failed to conceive your submission rates stay low and you need to be catching these cows,” he adds.

The collars have also helped to ease management capabilities. Mr Price adds: “It has almost given us an extra member of staff.”

Cows at Gelliargwellt receive a collar within the first week of calving.

“I like to put a collar on within the first week because we are trying to identify clear reference heats in the voluntary waiting period to give us a good indication that she is cycling correctly,” explains Mr Price.

“It is also easier to fit the collars before they go back into the milking group,” he adds.

The details of the cow and the collar identification number are then entered into the farm PC.

The collar detects raised levels of physical activity hourly and data is downloaded wirelessly to a base station every four hours, 24 hours a day. This data can then be analysed on a PC and smartphone devices at regular intervals.

“The base station has a range of 100m. If cows are out at grass the collar is capable of storing 48 hours of information and within 20 minutes it will download the most recent data once the cow has come into range of the base station (which is usually sited in near proximity to the parlour). So, before you start milking it will give you an instant update,” explains Michael Jones, Cogent’s Precision reproductive manager.

He adds: “It checks all cow’s individual activity against their normal activity during the past few days and against the rest of the group’s activity” which helps to “iron out false positives”.

At Gelliargwellt each cow is given a voluntary waiting period of 42 days post calving before being served.

Each morning active or suspect bulling cows are then separated into a breeding pen ready for inseminator Kevin Rickard, from Five Star Breeders, to inspect pre-breeding.

With 68% of heats starting between 6pm and 6am, Mr Rickard says it ensures silent heats don’t go unnoticed.

“It picks up silent bullers and cows that bull in the middle of the night and I know that nine times out of 10 they will be right to breed unless they are dirty,” says Mr Rickard.

At Gelliargwellt the most common problems seen by vet Rob Smith, of XL Vets Group Farm First vets, Abergavenny, are follicular cysts – which make a cow bull too frequently – and Luteal cysts – which stop them bulling completely – as well as metritis – a uterine infection.

“We seemed to get quite a significant number of cows that weren’t bulling long after calving and when we examined them they had metritis.

“Fat cows are predisposed to metritis,” explains Mr Smith. As the farm has struggled to get cows in the right condition at drying off this could explain the cause.

Cow numbers at the farm have now reached optimum levels and Pin Point is used as a tool to tighten up performance.

Each cow receives a maximum of three AI services to dairy. If she still hasn’t conceived she is then given beef semen, and if she has still failed to conceive at 150 days in milk she is run with the farm’s beef stock bull. After this she is culled out of the herd.

“By her fourth service she would have cost us about £150 and there’s no point in throwing any more money at her,” says Mr Price.

Key management changes are also being reviewed in order to boost fertility. “We noticed some of the cows, and particularly heifers, were ovulating very early – within 16 days of calving, which we felt was indicative of some sign of stress,” explains Mr Halliwell.

Currently the heifers are put into the fresh calving group post calving, but Mr Halliwell says putting them in the low-yielding group, where aggression for feed is lower, could reduce stress and help improve conception rates.

“The collar is a little guardian angel for cows. It is telling you everything that is going on with that cow 24 hours a day seven days a week,” adds Mr Halliwell.

At present all heifers are put to a high-index Holstein stock bull and to maximise cashflow almost half of the cows are served to Belgian Blue or Limousin beef bulls. Their progeny is then sold through the local market at 42 days old averaging £300 a head.

But in the future Mr Price hopes the system will improve profits even further by helping him to breed replacements from his most fertile animals, therefore increasing conception rates and improving calving index.

He can then afford to serve more cows with beef and take advantage of the strong demand for Holstein x beef calves.

“Using Pin Point, you can be confident of breeding cows with more expensive semen or using sexed semen on heifers because you know they are cycling correctly,” explains Mr Halliwell.