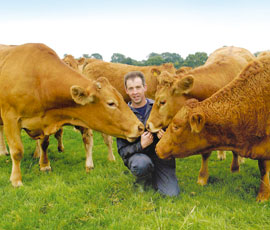 Accurate heat detection has often been a stumbling block for suckler herd owners wanting to access a wider range of top-quality bulls through artificial insemination.

And nowhere is this more of a problem than in spring calving herds where cows are at grass during the critical period for heat detection in the three months post calving.

However, Asda BeefLink Education and Demonstration farmer and former Farmers Weekly Beef Farmer of the Year Mike Powley has found a pioneering way around the problem.

Mr Powley, who farms with his father Tom at Green Hammerton, York, has been the first UK suckler farmer to use Heatime as a heat detection aid to improve AI timing in a commercial suckler herd.

“With AI a crucial part of our production plans accurate heat detection is central to minimising costs and maximising output,” he says.

“Traditionally, my father has been the main means of heat detection, but increasing cow numbers means there is less time available to spend just watching cows. On top of that, the times when cows are most active are those when we are unlikely to be around to see it.”

Using a heat-detection aid, which records cow activity with transponders on neck collars, has taken a lot of the guesswork out of heat detection.

“It’s a great tool, although we’ve had to adapt it to suit grazing cattle as it has originally been developed for dairy herds where cattle pass through the parlour twice a day.

“We have installed the reader over a water trough, so the information collected in the transponders on the collars is downloaded every time a cow goes for a drink. This information is then relayed to the computer and it flags up animals on heat so we can AI them accurately.”

The system proved its worth last summer, and while it may not suit every herd, the set up at Green Hammerton has shown it can be made to work in beef herds. “It has picked up bulling cows that we’ve not noticed and it has saved empty days, which results in a cost saving for us,” says Mr Powley.

“AI can give farmers access to the best bulls in the market and increase the variety of bulls they can use. Using AI helps give us the chance to use high EBV bulls from a number of breeds, rather than simply having to settle for the ones we can afford to buy.

“Our farming system places genetics at the foundation of everything we do – we can only produce the quality of cattle that we do because we have the genetics right on both the dam and the sire side.”

The breeding herd uses South Devon cows as the base breed, with Limousin bulls used to breed replacement females from them. “We’re looking for a Limousin bull with strong maternal traits, so high EBVs for calving ease, 200 day milk and 400 day growth are paramount.”

And easy calving breeds, such as the Aberdeen-Angus and Wagyu are then used on these first cross heifers to ensure an easy first calving and British Blues are then put on the cows to produce prime cattle.

Mr Powley plans to put the heat-detection system to the test in another way this spring. “Some dairy farmers I’ve spoken too believe it can be used to predict calving by monitoring activity in in-calf cows. So we’re going to see if we can make it work in a suckler herd.”

The challenge with adapting this sort of technology to suckler herds is to find ways of reading the data collected by the collars when cattle are grazing, says Fabdec’s Nick Cooper. “We built a frame to go over the water trough, as we knew that was a point all the cows would all visit regularly – ideally we want to site the control box and reader somewhere that cows are visiting at least twice a day,” he adds.

“It has, historically, been difficult to adapt automated heat detection to grazing beef herds, but our work with Mr Powley has proved that it can be done. We’re now confident it can be used in almost any situation and are looking at other improvements and technologies to make it even more adaptable.”