Heifers reigned supreme at the Beef Expo at Shrewsbury Market yesterday (25 May), scooping both interbreed titles and the silverware in the baby beef section.

Taking the day’s top honours and making it their second interbreed title at Beef Expo was the Lyon family from Bourne, Lincolnshire, with their 16-month-old British Blue cross Ayanna, which weighed 498kg. 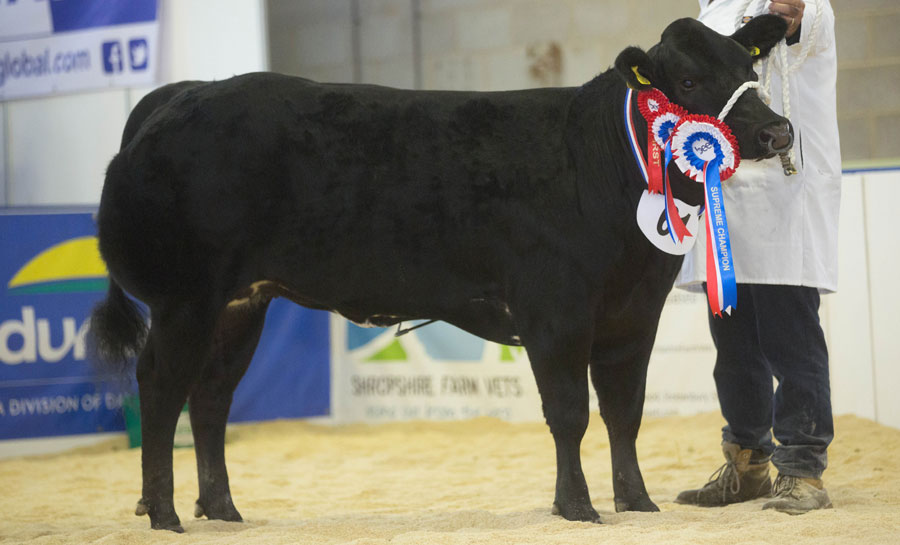 She won the red rosette earlier in the day in the heifer championship. She was purchased privately from Messrs Reed, Knarr Farm, Cumbria, for an undisclosed figure.

No stranger to the show ring, she won first place at Countryside Live as a calf and claimed the championships at Newark and Woodhall Spa Country Shows earlier this month. She heads to Herts County Show next (26-27 May). 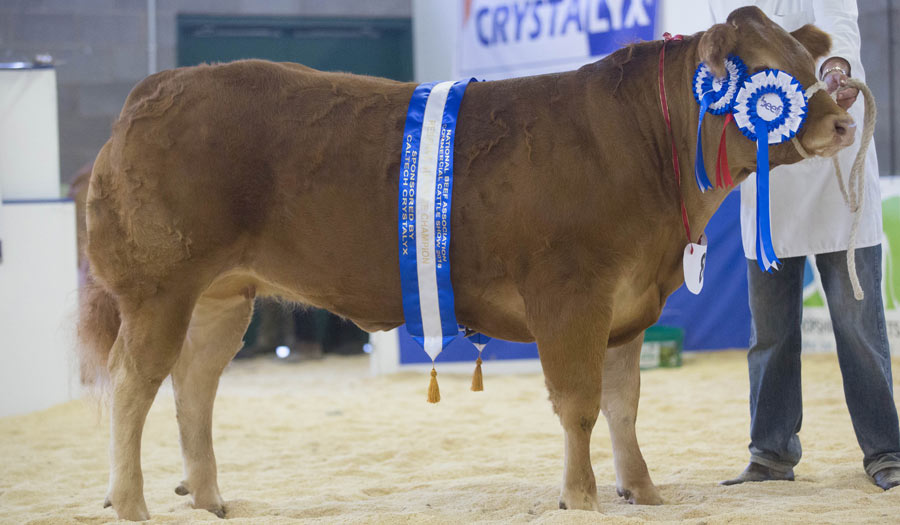 Bred by Guto Lewis, Welshpool, she was originally purchased by Wendy Morgan alongside her dam, who sold her to the Sellers last year after Diva’s success in the baby beef section at the English Winter Fair.

Sired by Lodge Hamlet, she is out of a pure Limousin cow. Diva won commercial champion and reserve interbreed at Woodhall Spa County Show earlier this month. She heads to Lincolnshire Show later this month (20-21 June).

Commenting on his placings, judge Neil Slack, who keeps 15 commercial cows in Penrith, Cumbria, said Ayanna really stood out on the day: “She had good lines, good legs, no waste at all and makes a bonny picture. But there wasn’t a lot between them.”

In the baby beef championship, it was heifers again that were pick of the day with judge Michael Alford, Foxhill Farm, Cullompton, Devon.

He tapped out nine-month-old Limousin cross Scarlet as his champion. Bred by Berwyn Hughes, Lampeter, she was purchased privately by Morgan and Jones, Llandovery, Carmarthenshire. 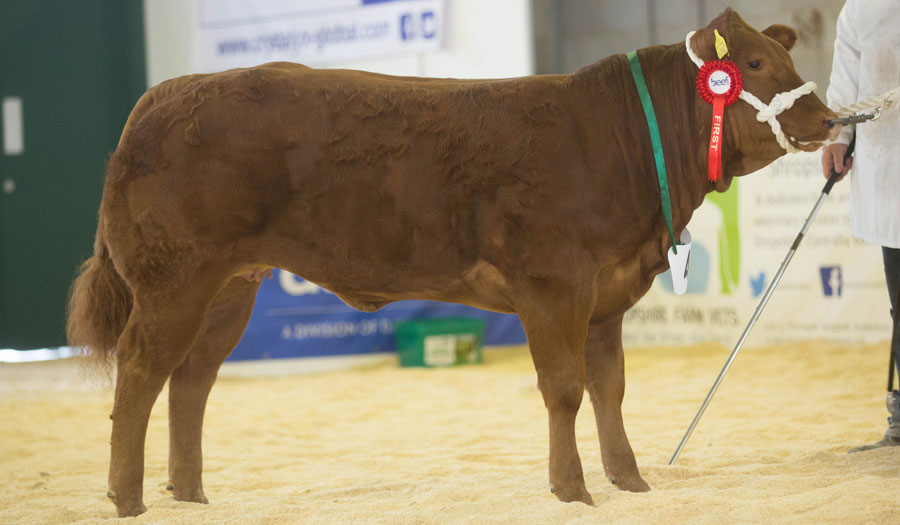 Shown by 27-year-old Sam Jones, she tipped the scales at 350kg and heads to Shropshire County today (26 May) before competing at the Royal Welsh later this summer.

Phil and Sharon Sellers were back in the winnings, taking reserve spot with their seven-month-old Limousin cross Little Gem. Bred by Phil Jones, Powys, she was purchased at Ruthin for £3,250. 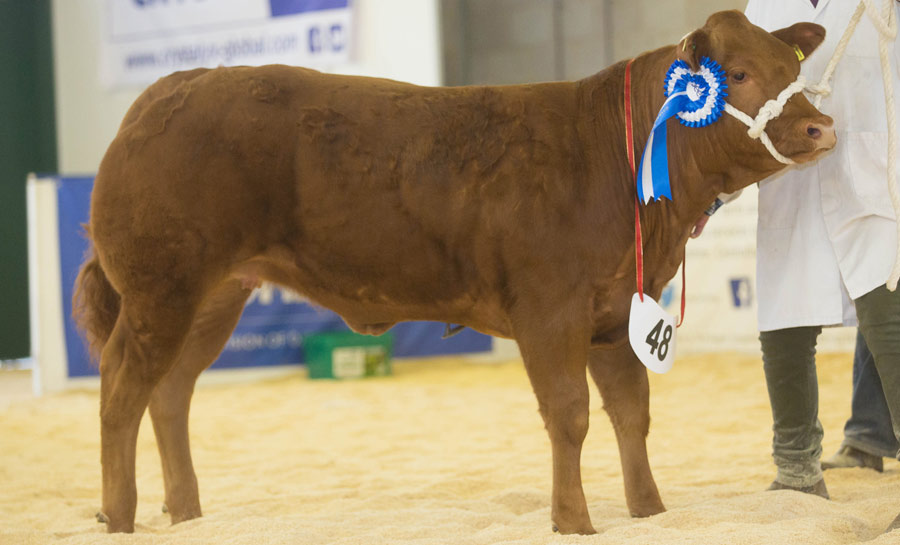 Shown by Phil’s son, 13-year-old Ryan Jones, she is out of Limousin cross Blue cow and is sired by an Irish Limousin bull. She weighed in at 323kg and will go home to rest before returning to compete on the Christmas show circuit later this year.

Taking the silverware in the steer championship were Melanie and Michael Alford with their three-quarter Limousin steer No Likey from Cullompton, Devon.

The 11-month-old was purchased at Brecon Show potential sale for £2,400 from DE and G Davies, Garth, and weighed in at 520kg. He next heads to the Royal Cornwall show.

Runner-up on his first outing was the home-bred June 2017-born Marley from Wilkinson and Marwood, Leyburn, North Yorkshire.

Sired by Waindale UFO, he is out of a British Blue cow and weighed 443kg. Shown by 19-year-old Beth Wilkinson, he will now be exhibited at Northumberland Show (28 May) and the Great Yorkshire in July. 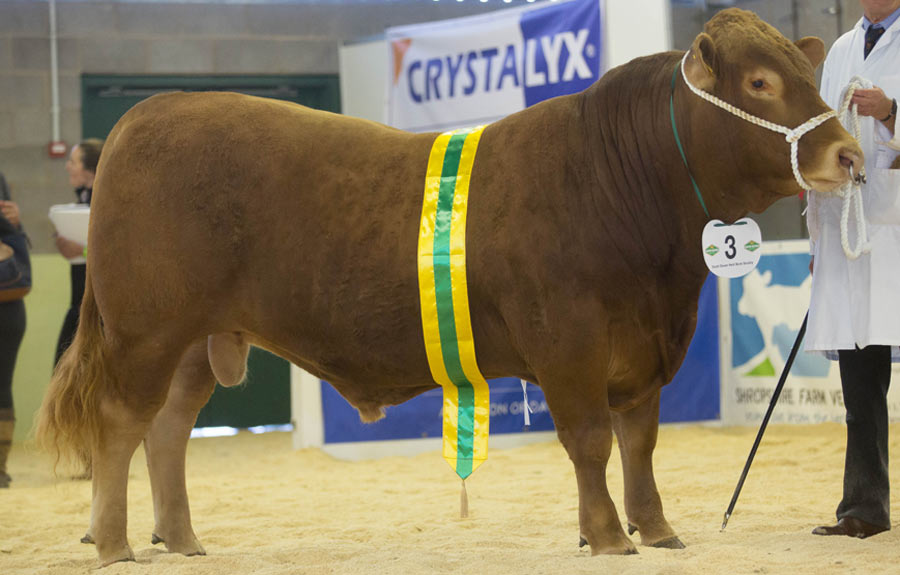 Sired by Rufford SAS Dillon, he is out of AI Z Rufford Erica 25 Ex90. He has already been sold privately, but will be shown at the Shropshire (25 May) and Suffolk (30-31 May) before heading to his new owner in Cornwall. 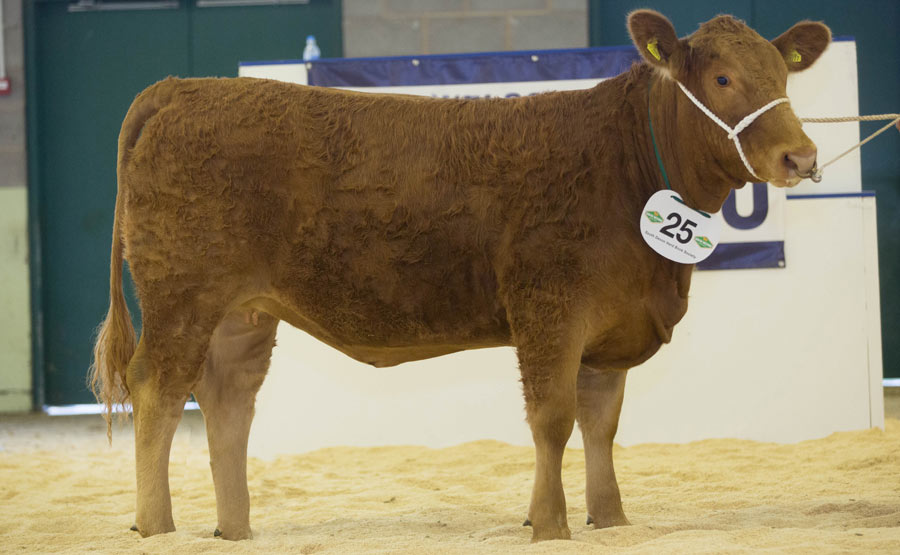 The yearling heifer Z Cilgwrrwg Cariad stood reserve to him. Bred and exhibited by Richard Hartshorn, Telford, Shropshire, she is sired by Z Eyton Trusty 3 and comes from six generations of home-bred dams, hers being Cilgwrrwg Sas Xanthippe VG87.