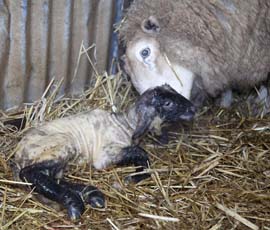 Mastitis in ewes could be having significant effects on welfare and productivity, with a study indicating many ewes have higher than normal somatic cell counts.

Research by Warwick University found while clinical cases of mastitis may be generally less than 5%, subclinical cases could be a lot higher.

Even though ewes may not show clinical signs of disease, subclinical mastitis can still lead to lower milk production and lower lamb weight as well as an increased risk of clinical mastitis, explained researcher Laura Green at the Sheep Breeders Round Table last week.

“In milk samples taken from 80 ewes at lambing through to weaning, we found most ewes had really high cell counts, with a range of bacteria present, but expressing no clinical signs of disease. High SCCs indicates infection,” explained Prof Green.

And the study found certain factors were associated with high SCC. Ewes with a long udder drop and ewes with larger, thick teats and old thin ewes were likely to have high counts.

Teat lesions were also found to be an issue and a possible route for bacteria to get in. “Young thin ewes were found to be more likely to have teat lesions and may be that is because she was not lactating well and lambs had to suck harder. Heavy litter weights and abnormal udder skin and teat position are also factors that can influence the likelihood of a ewe having teat lesions,” she said.

Prof Green stressed the importance of housing hygiene, particularly at lambing, and said to try different fields if believed to be contaminated/prone to mastitis. “But most of all, making sure ewes are in good body condition at all times and that the diet has sufficient energy to maximise milk production is important,” she said.