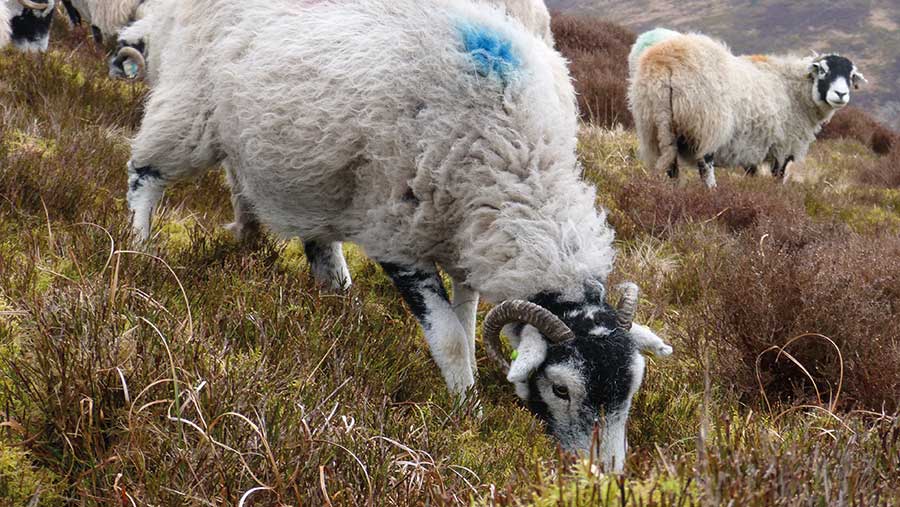 Latest estimates suggest Scottish Blackface numbers have reduced by 36% since 2012, with Welsh Mountain, Beulah, Welsh Hill Specked Face and Swaledale all back 15-19%.

However, the Cheviot breed showed a trend-bucking growth of 4%.

This is according to the 2020 Sheep Breed Survey, which underlined an increase in Aberfields (and other Innovis sires), wool-shedding breeds (Easycare and Exlana) and Lleyns.

See also: Hill farms slow to market but snapped up by investors

Industry figures said the data reveals the effect tree planting and agri-environment schemes have had on upland sheep numbers.

Geoff Pollott of the Royal Veterinary College, and Samuel Boon, senior manager at Signet, discussed the key findings on an AHDB webinar. These include:

What is the sheep breed survey?

Dr Pollott said the number of purebred hill sheep had fallen by 600,000 head, with fewer bred to crossing and terminal sires.

National Sheep Association chief executive Phil Stocker said changes to support payments with Environmental Land Management and the Basic Payment Scheme have forced commercial sheep farmers to shut out disease so their businesses could be “leaner and meaner”.

Mr Stocker said: “The Mule breeds definitely bring something; they are milky, have good uniformity of lamb production and your options for choosing sires are many and varied. However, what this survey shows is the interest in farmers taking control of their own genetics. There is a fear of buying in things you don’t want, whether it be resistant worms or iceberg diseases.

“Mule associations are aware of this and it’s pushing them to try new things. I don’t see this as the end of stratification at all.”

He said hill sheep breeding increasingly looked like it had two directions of travel: a traditional way that embraces diversification and adds value, or a route that requires more focus on health status accreditation.

He acknowledged how threatening ovine pulmonary adenocarcinoma, maedi visna, Johne’s disease and other health issues could be if not monitored.

“We also need to make more use of social media on how to manage Mules. They will milk very hard, so early weaning is important for getting sheep back in-lamb.

“Communication can help bridge the gap through the dealers and get feedback going between high-health-status sheep breeders and the lowland farmers wanting to do a better job.

“There are high-health-status Mule breeders. I want to see commercial lowland farmers use these breeders instead of buying into another breed.”