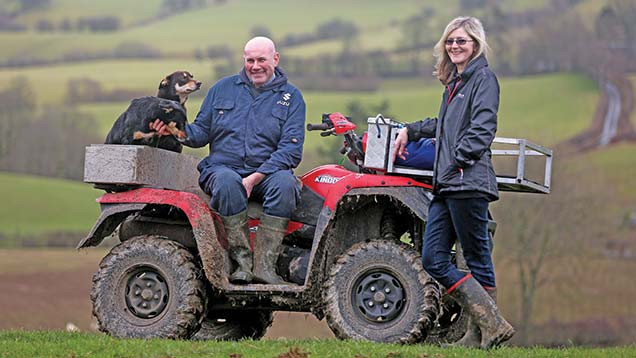 In the 30 years John and Sarah Yeomans have farmed Llwyn Y Brain Farm, their lambing percentage has improved from 90% to 165% and their carcass size from 13.6kg to 20kg.

They believe individual animal records are key to progression of the Beulahs, the breed they have always farmed on the 115ha hill farm, near Newtown, Wales, 1,400ft above sea level.

“Recording is important – if you don’t find out where you are then it is hard to set targets and know that you are improving,” says Mrs Yeomans.

A self-confessed townie, Mr Yeomans began running the farm bought by his parents after completing a national Diploma in agriculture at nearby Aberystwyth.

And while marrying a trained librarian has definitely helped with organisation, Mr Yeomans has always recorded in one way or another.

“The records used to be on all different bits of paper, but I have moved on from writing tag numbers in the dirt on the quadbike to recording them on my phone,” says Mr Yeomans.

“The fewer traits you record, the quicker advancements you’ll make. Too many issues will slow you down by clouding your judgement,” says Mr Yeomans.

And while Mr Yeomans believes prolificacy is not the most heritable trait, he believes using records to keep only twin lambs in those early days has been responsible for the improved lambing percentage, alongside better management and husbandry.

By looking back through lambing dates, he also noticed a late lambing trend and how ewes in this bracket often passed this trait on to their daughters.

But information kept is not only limited to fertility – health issues or problems with the ewes or lambs are also noted.

“Years ago we had 15-20 ewes with big teats, which the lambs found difficult to suckle. The records linked them all to one ram and as a result they were all culled,” says Mr Yeomans.

But without records it is hard to remember which ewes have poorer fertility or other issues, especially if they have not been culled out before the next tupping time, he adds.

“Our aim is to use the data to increase the amount of saleable meat to the abattoir and, ultimately, the consumer,” says Mr Yeomans.

The increased level of technical detail was also needed to join the Beulah sire reference scheme. However, it is easy to become a “recordaholic” warns Mr Yeomans.

“Only record things that make life easier, that will make you money or that you like the look of if this is important to you,” he says.

The Yeomans now use the data collected to assist in management decisions, preventing such ewes from breeding replacements in the pedigree flock.

But due to the smaller flock sizes in the UK, Mr Yeomans says it is difficult to be too ruthless in the culling policy.

“We just haven’t got the numbers to cull all ewes that don’t hit the mark. Instead, we can record the ewes with problems and cross-breed these to a terminal sire until the end of their useful life.”

Mr Yeomans advises removing the worst 10-20% from the flock each year. Those at the bottom will drag you down more than those at the top end will bring your performance up, he adds.

Mr Yeomans first trialled EID in 2002 and admits the technology left a lot to be desired in the early days.
“There were a lot of frustrating times, but now it can save a lot of labour. We have to have EID as part of legislation – why not use it to our advantage?”

The family has a handheld tag reader which connects via Bluetooth to a weigh head on their scales, so as soon as the tag is scanned, the weight of the sheep is automatically linked and saved to the individual animal’s record.

But in order to keep up with advances in technology, the Yeomans are now testing cloud-based software that can link the reader directly to a smartphone.

The two major benefits of going electronic, according to Mr Yeomans, are the removal of human error and the speed at which tags can be read.

“When running the sheep through the scales, recording their ID and weight is a momentary operation. We can read and record them as quickly as they can go through.”

However, Mrs Yeomans is not quite ready to give up the more traditional methods of recording.

“I’ve always kept lambing records in a notebook and continued as a backup when we first started recording electronically. Now it has become a habit. It may be a generation thing, but I hope with this new system we might finally have the confidence to leave the paper behind.”