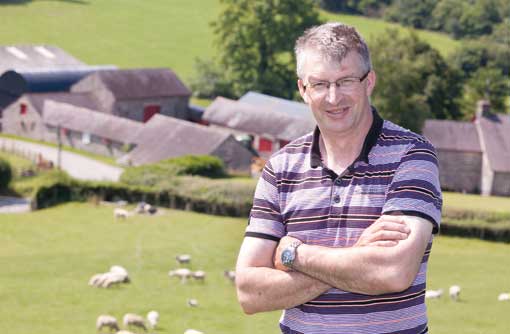 They visited Huw and Sheila Davies in Carmarthenshire.

Lameness control has always been high on the agenda at Llandre Farm. However, Huw Davies admits there has not always been structure to it.

“In the past, no matter what we were doing we weren’t making headway,” he says.

Four years ago, he began working with FAI farms’ Ruth Clements to see how the five-point plan could be implemented. Prior to this, lameness prevalence sat at about 8-10%.

Following advice, the farm began carefully assessing lameness and quickly treating early signs. “We used to delay treatment until we handled them. Now we pick them up straight away and either spray with oxytetracycline or inject in the field,” Mr Davies explains.

As part of the Welsh government’s TAG project, all animals are EID tagged and recorded for health and performance. However, Mr Davies says information is not used as effectively as it could be.

Now he recognises the need to monitor records to identify and cull repeat offenders.

“I know we should be culling, but I’m probably not doing it as hard as I should. I can see on my records I’ve got ewes that have been treated six times for lameness over the years.”

The flock is routinely foot-bathed with formalin at handling. Handling areas are limed and routine trimming has stopped as this is not recommended in cases of foot-rot.

Ewes are vaccinated for foot-rot once a year. But this year the flock will be vaccinated twice – at scanning and weaning. Lameness prevalence is about 1%, but the unit still witnesses seasonal peaks, with some scald in lambs in July and the autumn.

The five-point plan (see left) forms the foundation to any lameness control. But, the crux of successful control is to use all of the blocks which make up the plan.

“While Huw has made big improvements, the reason he is still seeing seasonal peaks is because he is not adhering to all parts of the plan,” explains Ms Clements.

“The aim should be to build a safety buffer so the flock is able to cope with increased challenge at certain times of year, but also carry on reducing the challenge. This will help reduce antibiotic usage.”

The Hit Squad identified the following areas for improvement.

Action: Act on records to cull out persistently lame sheep

Recording at Llandre Farm is excellent, but the key is to ensure the information is acted on.

The Hit Squad believes this is one of the main areas for improvement. “By leaving sheep that can spread infection and not eliminating the reservoir, you will always have grumbling disease,” says Ms Clements.

At the start it’s important to be ruthless with the true foot-rot cases, says vet Josepth Angell. “By doing this with the ewes, your scald in lambs will disappear.”

The practice of quarantining bought-in rams is good, but Mr Angell recommends assessing for CODD.

“I would suggest tipping rams and looking for signs of CODD. Buying in is likely to be the main reason it’s introduced to a farm. If you don’t assess and treat early there is the potential to introduce the infection, with some farms likely to see a big explosion in problems.”

By treating cases early, lameness has been significantly reduced. “Spraying lambs with oxytetracycline at the early signs of scald is good practice. And also by controlling foot-rot in ewes, you won’t get scald in lambs,” says Ms Clements.

The handling system is good, with hardcore areas for sheep to stand after foot-bathing. However, Mr Angell recommends avoiding gathering and handling stock just for foot-bathing, as this will actually cost more in the long-run.

“It’s OK to foot-bath when you are handling stock for other purposes, but gathering increases the risk of infection spread, so don’t just handle stock for foot-bathing alone.”

“Next year I would suggest vaccinating at scanning and then after shearing. Because you are seeing some scald in lambs at this time of year, leaving your second dose until weaning may be too late.”

Vaccination as part of the proven five-point lameness reduction plan provides effective treatment for foot-rot, as well as protection against the onset of the disease. Footvax vaccination programmes should meet individual flock disease control requirements and be used in conjunction with the other four plan points. Wherever possible, whole flock vaccination should be adopted. Talk to your vet or SQP for further advice.