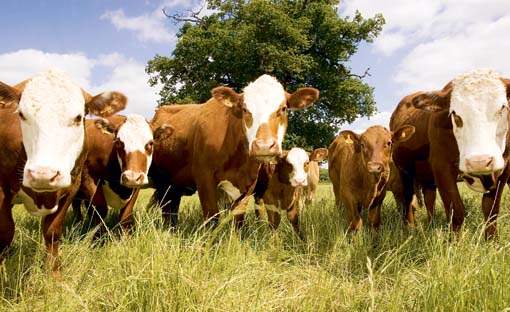 Bovine viral diarrhoea (BVD) is one of the most damaging cattle diseases in the UK, often causing heavy financial losses without being immediately apparent. But a vet in County Durham has successfully tackled the disease using a holistic strategy, which is now being rolled out across the country.

Debby Brown of Castle Vets, Barnard Castle, started the project in winter 2007, targeting beef producers in Teesdale. Initially she offered to test their herds for BVD, and helped to draw up a strategy to either reduce infections, or protect clear herds.

“We started by trying to investigate what the health status was in the area,” she says. “Whenever we were out on farm doing routine tests, we took a group of homebred calves aged 9-18 months old and tested them for antibodies. We followed that up with some meetings to educate farmers on how to protect their herds, and contacted local markets to advertise and promote BVD-free health status, and to educate buyers.”

Initial test results revealed that 20% of the 80 herds tested were positive for BVD. “Quite a number of those have put in place control measures, like vaccinating, further testing, and improved biosecurity – and have since tested clear.” The latest results, covering 150 herds, showed just 17 had evidence of infection, 12 of which have implemented new control measures.

BVD affects cows of any age, and suppresses the immune system, paving the way for other, unrelated, infections. In calves it causes pneumonia, scours and stunted growth; while in cows it results in infertility and abortion. Cows which are infected within the first trimester of pregnancy can pass it on to the foetus, with the resulting calf becoming a carrier. These persistently infected (PI) calves are the biggest sources of infection within a herd, passing the virus on through any bodily fluids, including nose-to-nose contact and manure.

Any animals identified as PIs should be culled or isolated for finishing, and farmers should vaccinate cows before they become pregnant. Calves can also be vaccinated, but it is equally important to draw up a biosecurity strategy to reduce the risk of disease, says Mrs Brown. High risk factors include buying in stock from unknown health status herds, contact with neighbouring cattle, contractor usage and farm labour.

“Those farms which have controlled the disease have enjoyed huge benefits in calf health. Cattle which are certified BVD free will be healthier – but if you bring in a diseased animal you will get massive problems, so you either need to source from all high health status farms, or vaccinate as well,” she adds.

“We are now retesting old herds and involving new herds. A lot of the cattle here are sold as suckled calves, so we try to get as many results in as possible before the calf sales to identify disease-free herds. They are starting to command a bit of a premium now.”

The project has proved such a winner that is has been used as a template for the South West Healthy Livestock Initiative – a grant-funded scheme to reduce the incidence of diseases, including BVD, across south-west England. In future, it may be rolled out across the rest of the country, having been so successful in commercial circumstances.

One farmer who took part in the project initially tested clear of BVD, and chose not to take any further measures to protect against it. But he later brought in a heifer and calf, which turned out to be persistently infected. “We started getting calves which just wasted away and died at a year old – so 15 months ago we tested all 200 youngstock, and found 14 PIs. We tracked them back to that one calf – it’s done a lot of damage and cost me thousands of pounds.”

He now tries to buy stock in from one known farm, isolates and vaccinates newcomers, and vaccinates suckler cows before putting them to the bull. “It’s definitely worthwhile. I now ask vendors what their health status is; some say they’re monitoring for BVD, but that’s no guarantee they haven’t got it. It’s been an expensive learning curve. When I tested clear initially I thought that I’d only need to do something about it if the cows got infected. I think it’ll be another year before I’m fully rid of it.”

Find out more about BVD in cattle and how to control it by taking a look at our academy online.