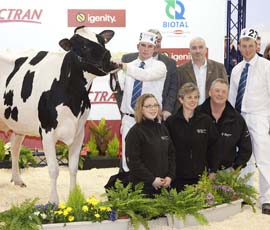 The six-month ban follows a guilty plea by Willsbro Ltd back in February to offences under tuberculosis and cattle identification legislation at Bodmin Magistrates’ Court.

The animals which were under TB restriction, were then found to have been shown at the National All Breeds Show, Stoneleigh Park, last year without the authority of an inspector.

In light of the guilty plea and breach of Holstein UK’s showing rules, the society’s board decided to suspend Willsbro Ltd from showing for six months, effective from 3 June.

This decision will prevent the breeders from showing cattle at any of the summer shows as well as the All Breeds National Show at the Dairy Event and Livestock Show in September.

Commenting on the decision, Holstein UK executive director, Greg Watson said: “Although Willsbro has assisted Holstein UK in its enquiries, the fact remains that animals were moved illegally from a holding and not only broke the rules of the land but the society’s rules as well.”

Six months was decided as a reasonable ban after considering all the facts presented, Mr Watson said. The society has also passed on all the legal costs associated with the case, although Mr Watson would not disclose the sum.