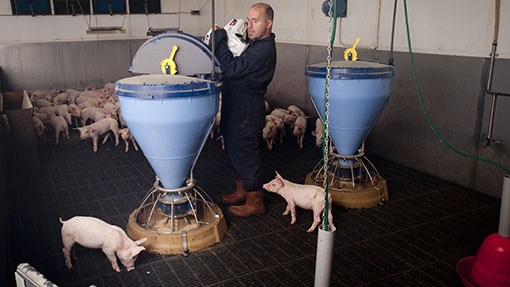 Pig producers could gain an additional £224 a sow a year by improving their environment to ensure pigs meet their genetic potential.

On average, pigs only realise 35% of their genetic potential in comparison to 75% for chickens.

This is largely due to a widening gap between genetics and unit environments, Stephen Waite, JSR head of technology, told delegates at the 25th and final JSR Farming Conference.

He explained cheap pig housing is not always the best option for long-term profitability.

“When someone builds a new-build, they like building it with minimum water access, minimum feed space and minimum floor space. They do that because that’s the cheapest. But minimums don’t change with genetic progress.”

He highlighted three areas of production where pig environment could be improved to boost performance: farrowing, nursery and finishing.

The number of piglets born a sow was higher if they were served at the optimum temperature, he explained.

One farm situation he highlighted was where the temperature at service rose above 14C during the summer months, the average number of piglets born fell.

This equated to £80 extra profit a gilt a year for four more piglets sold, he said.

Dr Waite said this resulted in a 1.3kg uplift in weights at weaning worth £2 a pig.

At Harper Adams University College, finishing pigs were fed to weight, which resulted in an FCR of 1.97 (the Bpex average is 2.4).

Dr Waite calculated the 0.23 FCR improvement was worth £5 a pig and he said the total that can be gained for these overall improvements is £224 a sow (see box, right).

“Better control of pig environments is already available through technology.

“You can tailor your environment to make more out of genetics. On farms with total control units, you see mirror growth curves,” he said.

But he warned it is impossible to make improvements without measuring performance.

He added: “Small changes really can have a big impact.”