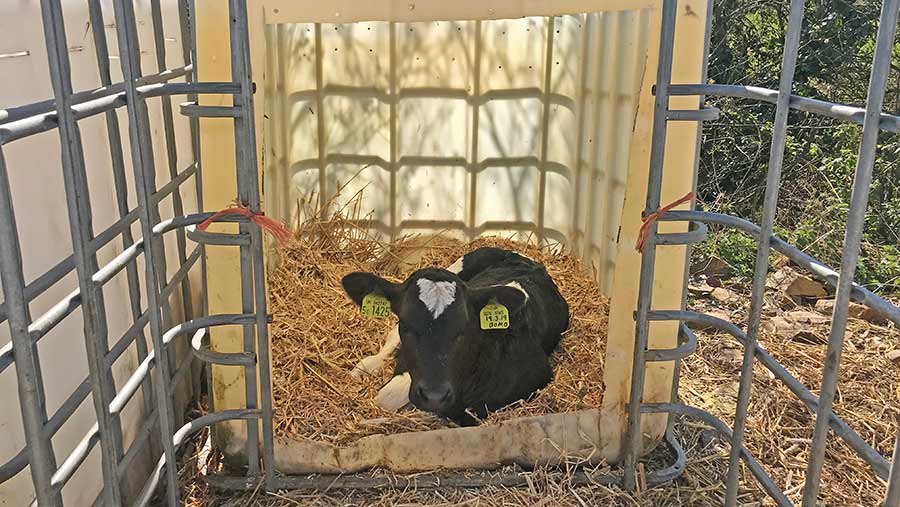 Dairy newcomers the Courtier family from Dartmoor switched from group housing calves to single hutches they designed and made themselves, to save money.

Julian Courtier, who manages the 350-cow spring- and autumn-calving herd alongside his two sons, Chris and George, credits the move with slashing medicine use and increasing youngstock growth rates.

When the family established the dairy in April 2017, they designed a new greenfield site. This included the installation of a 50-point rotary parlour and a brand-new shed for winter housing.

After buying in initial stock, they made the decision to breed their own replacements to add to the future milking herd.

This meant converting the old bull pens into calf housing, and grouping youngstock in batches, according to age, in straw-bedded pens.

While this provided comfortable accommodation, feeding youngstock and ensuring each calf was getting the adequate milk intake became an issue, as did disease control.

“We began looking into the possibilities of moving calves into individual hutches, rather than grouped in loose pens,” explains Julian. 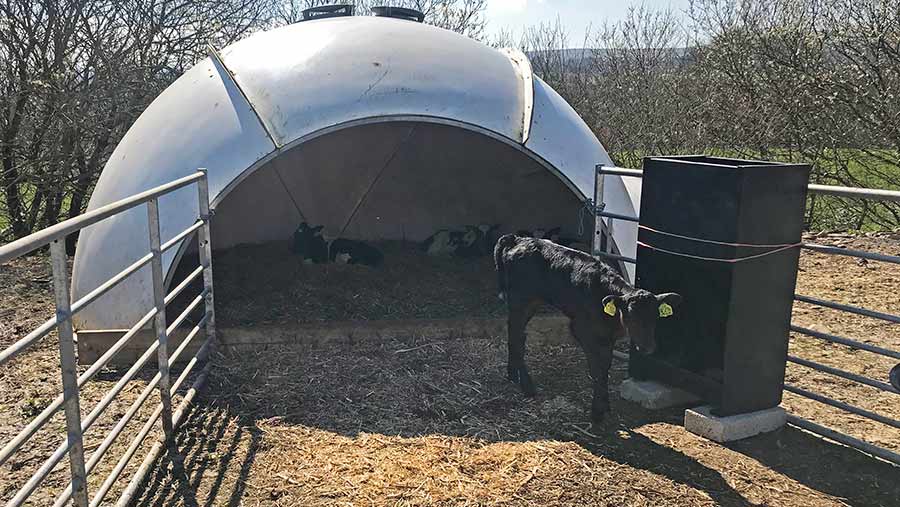 Calves are moved to igloos after 10 days

Individual hutches proved to be a costly investment, at an average of £300 apiece, so after seeing the idea online, the family decided they would try making hutches themselves out of recycled IBC containers.

“We sourced the IBC containers from a local fuel merchant at a cost of £10 each,” says Chris.

The build process involved cutting a hole in one side of the container, making incisions for ventilation and using the steel frame to make a locking gate around the IBC to give calves additional, secure space to move around.

After the initial home-made hutches proved to be a success, the farm went on to make a total of 40 hutches.

When a calf is born, it is given four litres of colostrum straight away and then put into the hutch for about 10 days, where it is fed using a JFC single-teat feeder. After 10 days, it is moved to the igloo, where it will be grouped with 10-12 calves.

“It’s so much easier to train that calf to suckle and ensure it is getting the correct amount of milk when it’s in an individual pen. When we first started dairying, we made straw pens for the youngstock and were putting half a dozen calves in each pen.

“We found that with very young calves, it was difficult to know whether they had received enough milk.” 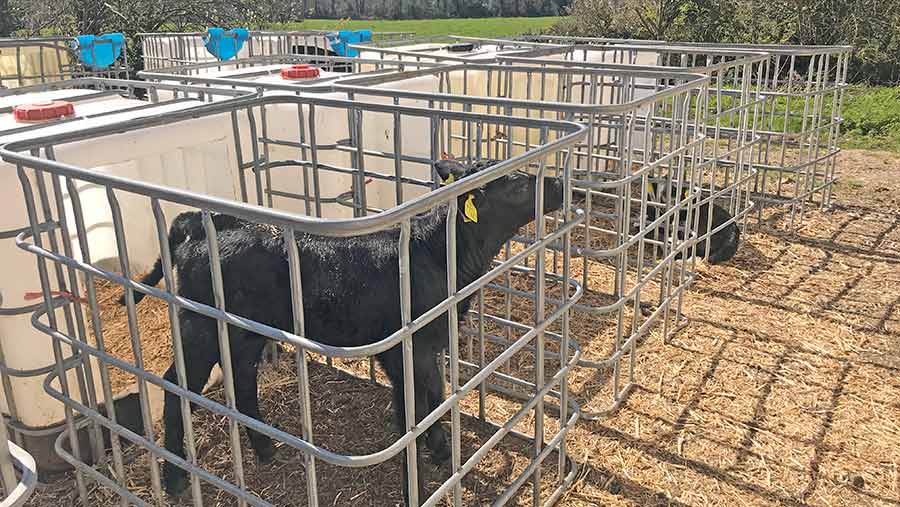 According to Chris, this undoubtedly had an effect on calf performance. “The smaller calves were getting poorer a lot quicker in the previous system. They couldn’t keep up with bigger, more competitive calves.

“Without doubt, calves coming through now are much more consistent and we are having fewer problems – particularly with losses – around calving time.

“Growth rates have improved, and we are now starting to do a bit with weigh bands to monitor this accurately.”

Improvements in disease control and cleaning

The farm has also seen significant improvements in health.

“With pneumonia, we have seen a reduction in incidents. In this spring-calving block, I don’t think we had once case, which is fantastic,” adds Julian.

The only downside is it is slightly more labour intensive, says Julian. But he reckons this is offset by a simpler and more effective cleaning regime.

“Every time a calf comes out of an IBC, it’s washed down, disinfected, lime is applied, and fresh straw put down, which really helps to keep disease outbreaks under control, ensuring we have strong, healthy and consistent followers coming into the milking herd,” says Chris. 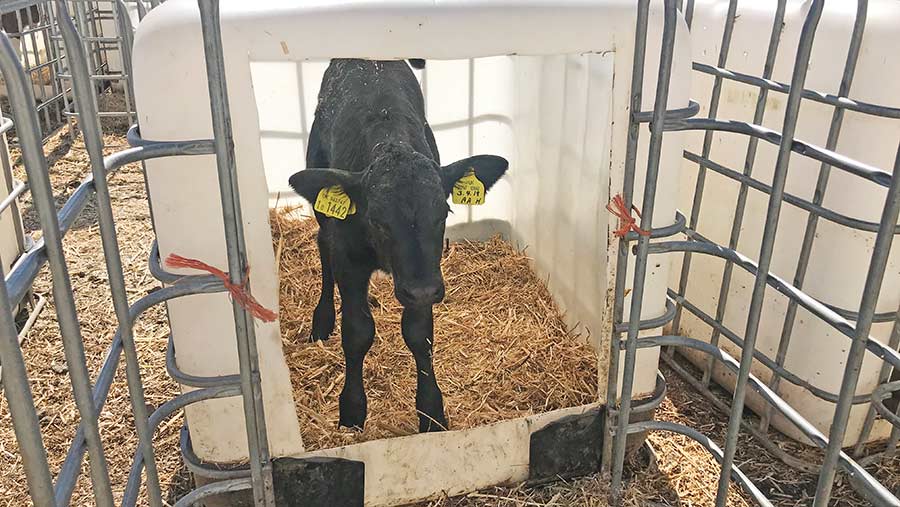 Julian adds: “Cleaning down is regular and thorough, as it is so easy to do every individual hutch as you go, whereas before when we were using bigger pens, the larger area made cleaning down a more time-intensive task. We really feel like we are doing things properly now.”

While this improves animal welfare, it has also helped to keep costs down, explains Chris.

“If you have not had to inject a calf, you haven’t spent anything. This year we haven’t had to do that at all.”

One thing that has been really revolutionary this year has been a switch to rape straw, explains Julian. “We were partially forced into it with the price of straw last year, when we found ourselves with some rape straw.

“We have actually found it to be a lot better – it seems to drain much better than traditional straw.”

Chris agrees: “In future, I think we will buy rape straw just for the calf hutches. The calves stay drier and this also helps to keep them healthier.”

We asked Jamie Robertson, consultant at Livestock Management Systems, to give us the lowdown on exactly what the pros are – as well as some of the cons – of using calf hutches, and for advice on making your own.

“DIY hutches have been used for years. If you stick to the basic principles of any calf housing – which include proper ventilation and drainage, as well as meeting the current space requirements – then there is no reason why they can’t be a cost-effective solution for youngstock accommodation,” Mr Robertson says.

The hutches must also meet the recommended space requirements for calves.