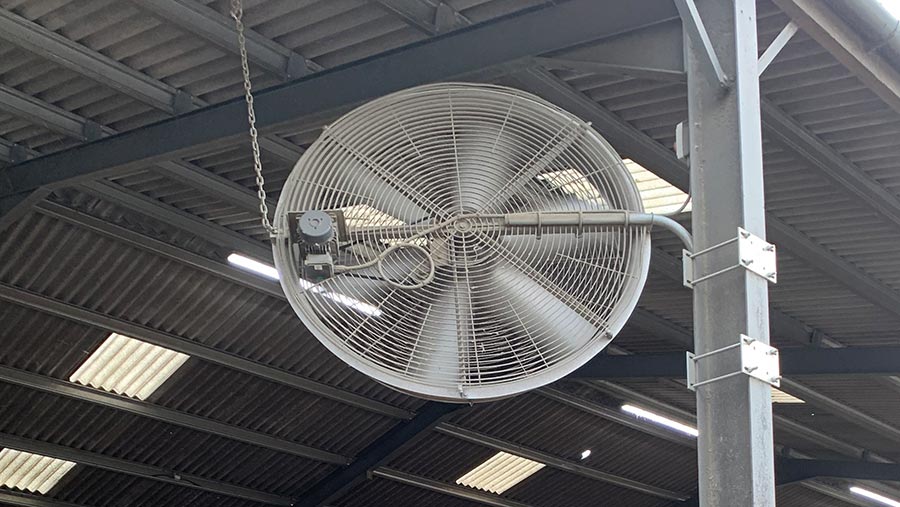 Fans are an important consideration for all housed dairy systems where cows may be subject to periods of heat stress that could negatively affect health and production.

Heat stress is caused by a combination of heat and humidity and is measured by the temperature humidity index (THI).

In damp, humid environments such as those experienced in parts of the UK, heat stress can occur at relatively low temperatures as the ability for the cow to “dump” moisture from the body into the environment to cool herself decreases.

According to Cargill, fertility traits are affected once daily average temperatures exceed as little as 14C (THI 57), and conception rates can fall from 20C (THI 65) when relative humidity is 60%.

Fans cool cattle by increasing the air speed across their bodies and raising the rate of heat loss. Even when a shed is naturally well-ventilated, there will still be days when heat stress is a problem.

1. High energy costs should not be used as a reason to avoid installing fans. Running fans does cost in terms of electricity use, but not running them could have an adverse effect on health and production.

3. Look at return on investment – how many days in the year will fans be needed?

4. Install humidity loggers (available from about £20) at key points in the shed where cows concentrate – for example, in the collecting yard. This will help determine where to target fans to give the best return on investment.

6. Is there sufficient power supply to service the fans?

7. Consider installing an automatic variable-speed control box based on the temperature in the worst part of the building. This will enable the fans to speed up or slow down depending on requirements, and help lower energy use.

8. Where is the air generated by the fans going? Dirty air needs to exit the building to avoid causing health issues.

9. Look at the amount of air generated by specific fans and work with suppliers and advisers to determine the location and height of the fans so they deliver the required result.

All manufacturers have their own versions that will differ slightly and carry their specific brand name. However, broadly speaking, they tend to fall into the following categories:

Size varies, up to more than 2m in diameter. These fans can have a casing around them to stop air going sideways and are hung at a slight angle on chains in rows along a shed, typically above the cubicles.

Air is blown in the same direction as the prevailing wind. The idea is to take air from one point of the shed and push it over the backs of the cattle until it exits the building. 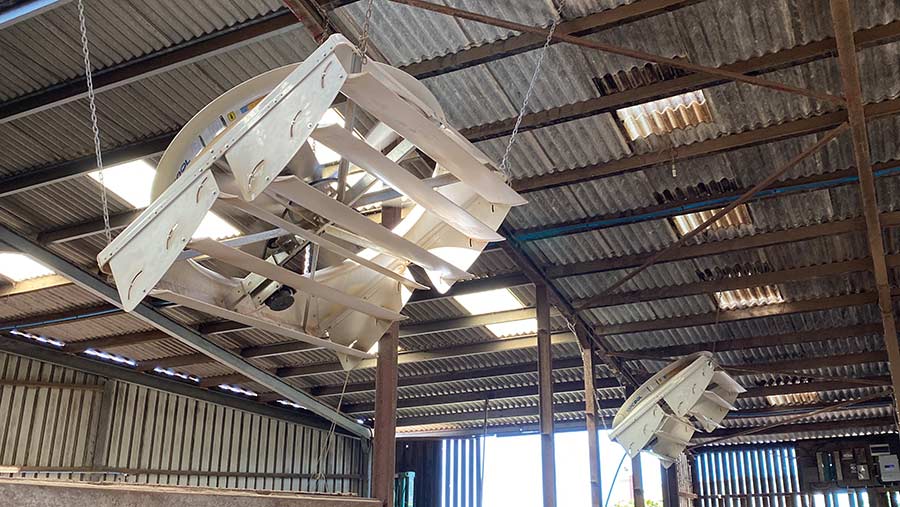 ✔ A lot of air pushed using a small amount of electricity
✔ Can have louvres/fins which direct air out of the front of the fan
✔ Can be used on their own to deal with a “hotspot” in a shed – for example, in front of a robot
✗ A series of fans needs to be hung when cooling cows over a large area
✗ Must be angled correctly so air goes across the backs of the cattle
✗ May not be suitable in low sheds
✗ Less air is projected sideways, so several rows of fans may be needed

These are large helicopter-style ceiling fans that blow air downwards on the cattle. 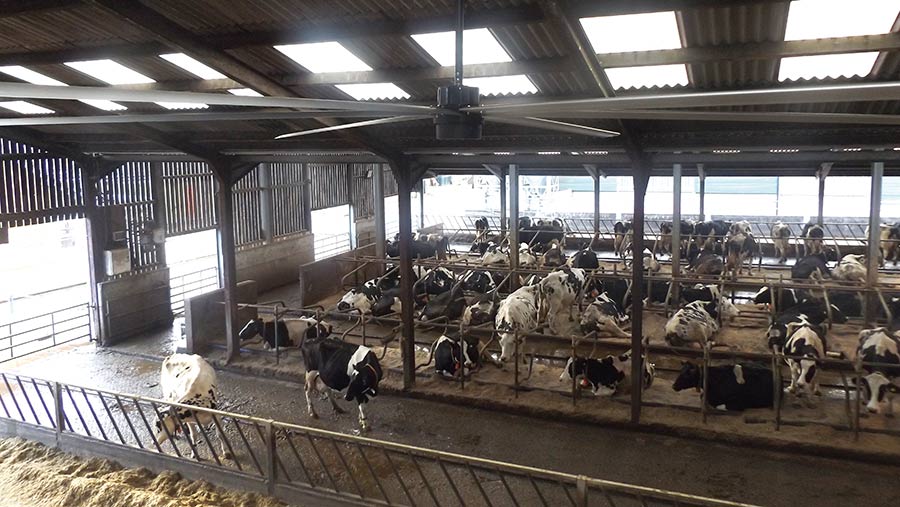 ✔ Capable of moving high volumes of air
✔ Blow air down and outwards. The fan can be reversed, but plenty of air outlet will be needed
✗ May stir and mix air, rather than create a draught
✗ Could disrupt ventilation across a building if the shed is ventilated by natural air movement
✗ Not targeted
✗ Restrictions on clearance from the ends of the blades to an obstacle (for example, a wall) and between fans. Work best in clear-span buildings

Plate fans are installed within the wall at one end of a shed to suck air from outside into the shed.

✔ Plate fans can work if there is a hotspot in the shed, such as a collecting yard or next to a robot, but they are not suitable for cooling over large areas
✔ A positive pressure tube can be added in low-roofed cow sheds to deliver air across the whole building. The size and direction of the holes in the tube, and the size of the fan, will need to be designed specifically for adult cow requirements
✗ An individual fan is often installed to cool cows, but may not bring in enough air to cool the shed
✗ Think about the height of the fan. If it is high above the cows, it may help with ventilation, but will not cool animals

Panel fan are similar to belt-driven fans, but are not housed in a box. 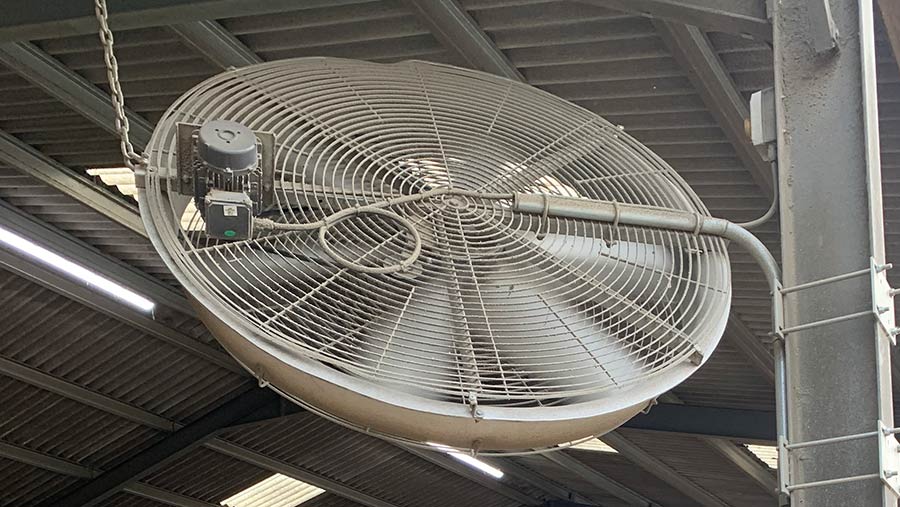 ✔ May be more suitable for wider sheds where air flow does not need to be directed
✔ Smaller than belt-driven fans, so take up less room
✗ Thin, circular casing does not stop air going sideways and does not have fins to direct the air
✗ Less volume of air produced from each fan, so more fans may be needed

These looks like typical office fans, and are housed in a cage or basket.

The milking cows’ cubicle shed is surrounded by buildings on the prevailing wind side, which limits airflow.

As a result, the Hosegood family started to see cows bunching at one end of the shed.

In particular, two bays at one end of the shed caught the prevailing wind and would be a lot cooler as a result.

Up to 100 cows would be crammed into those two bays, explains Ed Hosegood.

During a 30C spell in July last year, cows were clearly experiencing heat stress, with milk dropping about 1.5 litres a cow a day.

That autumn, the family decided to install two belt-driven fans with directional fins under the guidance of CowPlan. 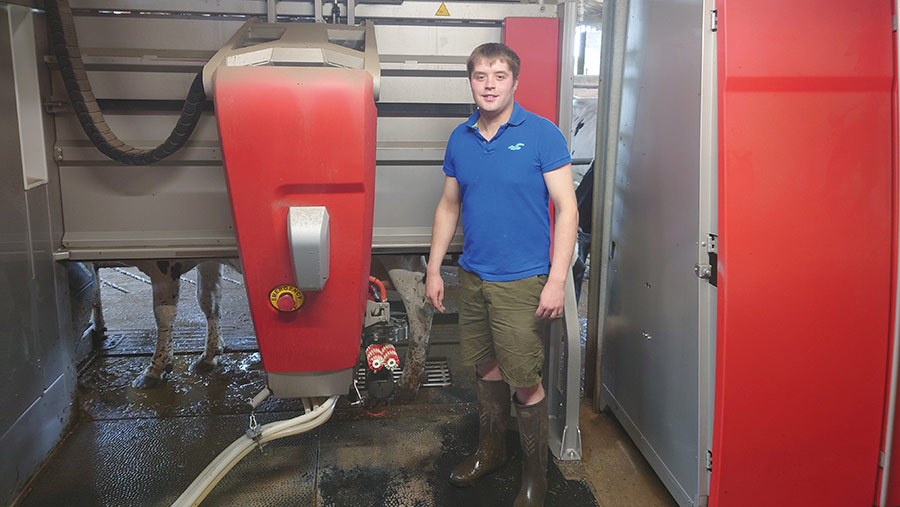 Fans are located 2.8m above the cubicle beds with a 30C angle from the horizontal. The air produced is enough to cover two rows of cubicles.

The first fan is located at the prevailing wind end to draw clean air in and the second is in the middle to push air down the shed.

The farm has single-phase electricity rather than three-phase, so inverters were needed to run the fans at a cost of about £250 each.

Mr Hosegood chose belt fans over panel fans because they were bigger, so fewer fans – and therefore fewer inverters – would be needed across the shed. 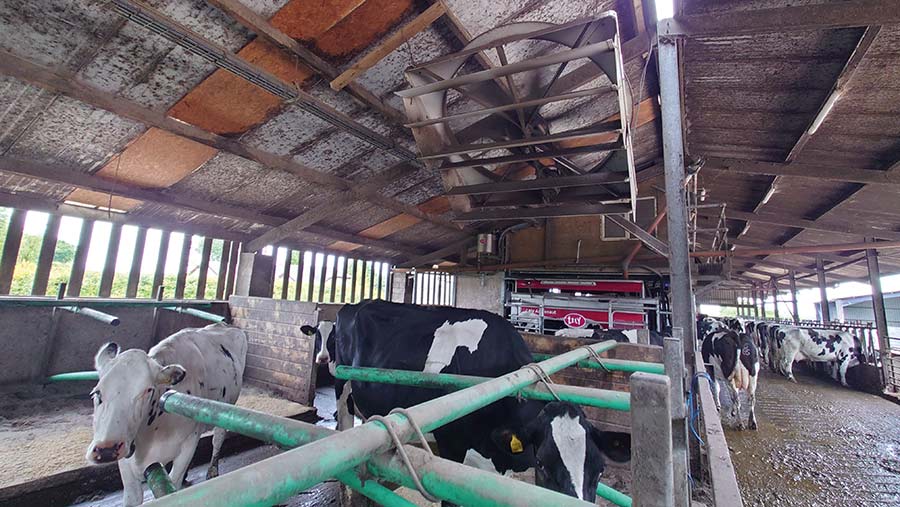 The fans are thermostatically controlled. They come on at 8C and run at 20% of maximum speed, and are on variable speed until 18C. They then run at full speed at 18C or above.

The running cost in the winter is £300/month in electricity (at 15p/unit electricity). This is likely to double in summer. A 20kW solar array has been installed to power the farm, including the fans.

“They’re on nearly all winter in the day,” says Mr Hosegood. “You’d be surprised when they come on. It’s quite often 10-11C in the shed in the winter.”

Despite being installed in the winter months, he has noticed some marked improvements: