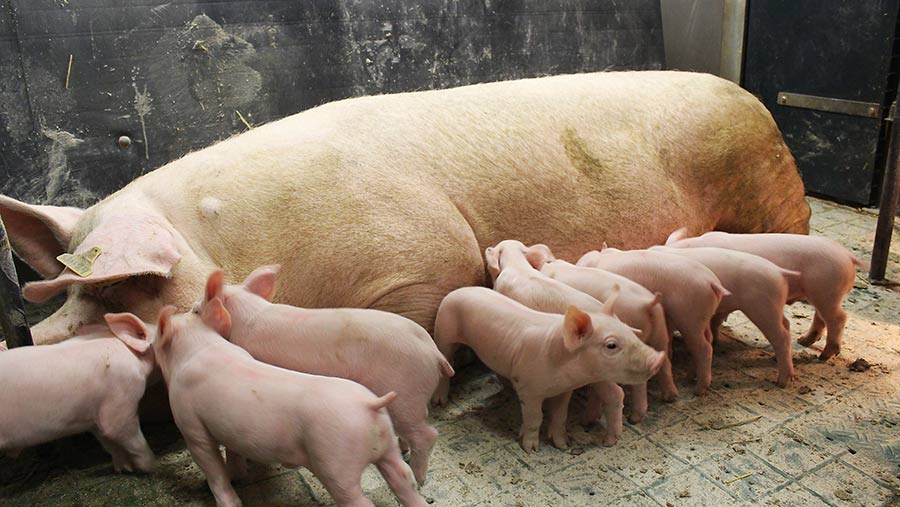 Traditional farrowing crates are used in the pig industry as they give piglets the best chance of survival. However the supermarket drive to increase pig welfare in indoor systems could see them phased out.

The drawback with traditional crates is that they limit sow movements, meaning the animals are unable to express natural behaviours such as nest building.

Larger pens which are less restrictive to sow movement were developed in a Defra-funded project led by Professor Sandra Edwards at Newcastle University and Dr Emma Baxter from SRUC but they are still to be more widely adopted.

The crates are named PigSAFE, which stands for Piglet and Sow Alternative Farrowing Environment.

PigSAFE pens are 25% bigger than a traditional crate, they cost 34% more to install but aside from the extra space allowance, the sow is never confined, which means she can express her natural behaviour, while piglet safety is also considered.

The pens have been adopted on a large scale in Australia by one of the country’s main pig producers, Rivalea. Farmers using them in the UK can get RSPCA Freedom Food status.

He says the PigSAFE are nothing to be concerned about when the management is right, and they are designed correctly.

Even though the sow is loose in the pen, pre-weaning piglet mortality is no higher than a traditional crate at about 8%. 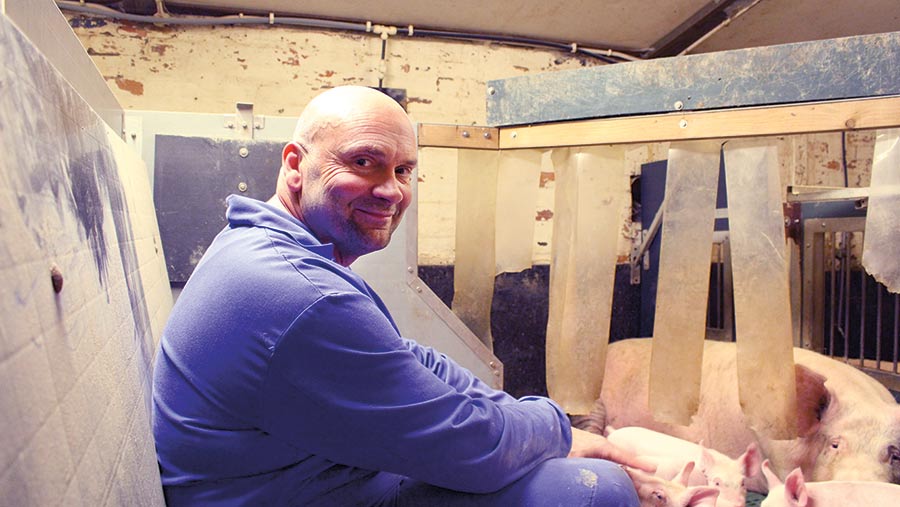 The pigSAFE pens have been fitted into existing buildings with four of the new pens replacing five traditional crates.

Mr Blomfield says the design and management is crucial in reducing piglet vulnerability. 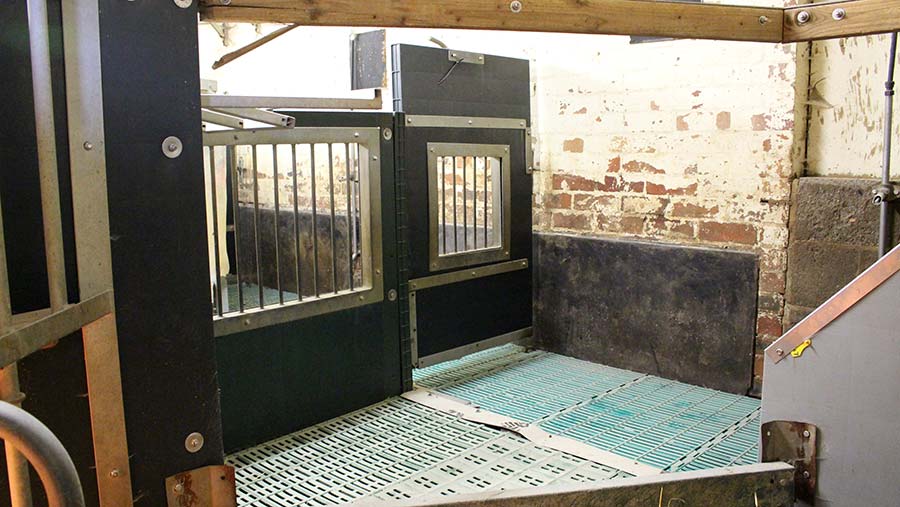 Getting sows in correct position

The aim is to get sows to farrow with their vulva towards the door to the passageway making it easier to monitor farrowing.

To get the sow in the correct position they enter the farrowing building through a back door.

This means when the sow enters the nest area, she turns around to face the way she comes in.

“Mr Blomfield says: “Sows expect danger to follow them in, so they turn around to face what they perceive to be danger. The pen has a barred panel allowing her to see the sow in the next pen, which is also a perceived danger.

This means she lies with her vulva towards the door and faces the back door and the barred panel.”

The PigSAFE pens at Cockle Park have fewer assisted farrowings than the crates, with 10-15% assistance in crates compared to less than 5% in the PigSAFE pens.

At Cockle Park, sows are on a three-week batch farrowing system. Pregnant sows come into the pens on a Monday and are left a day to settle down before farrowing.

At 3pm on each Monday the sows are fed and in Mr Blomfield’s words “humanised”.

“Humanising the sows makes the whole farm easier to run as it means you can do all your stock tasks with the piglets while the sow is there,” says Mr Blomfield.

To humanise sows, staff enter the pen and crouch down, so they are at sow level.

He says: “As soon as the sow comes to touch the back of your hand you know she then has trust in you and doesn’t perceive you as a threat.

“It only takes a couple of minutes, but it has a massive impact. With gilts we reinforce it once a week.”

Each farrowing room contains four PigSAFE pens. Mr Blomfield will place any gilts in the two centre pens with sows on the outside two.

Since the gilts are served a day later, this means the sows farrow first, which prepares the gilts for farrowing as they listen to the sounds of sows farrowing at either end of the room. 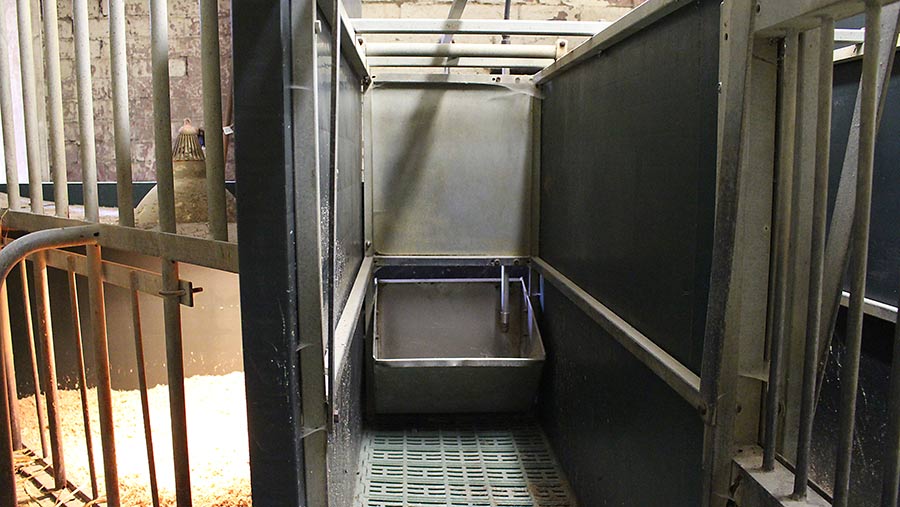 The pen has a free access stall feed station, which can be used to lock in sows  should this be needed while stock tasks are performed.

However, this is rarely required at Cockle Park as all the sows are humanised. 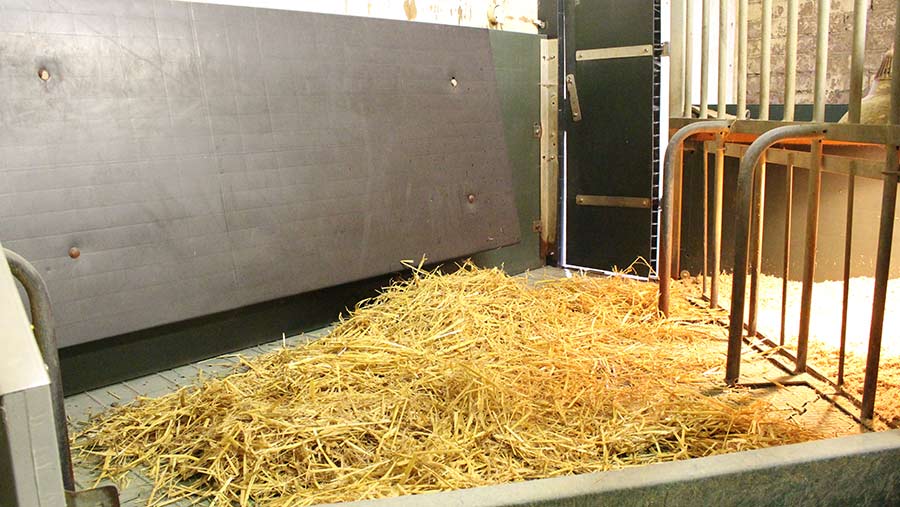 The nest area contains 2kg of straw, which is the optimum amount without wastage. The flooring is semi-solid, containing perforations so fluid can drain away and so straw cannot get through.

Once the sow has farrowed, any remaining straw is removed. It is not replaced as the need for the sow to nest build disappears post-farrowing.

Mr Blomfield says. “If we kept adding straw it would make the open part of the pen too attractive to the piglets and would increase their risk of being crushed in the first few days.”

A kicker board separates the nest from the slatted dunging, drinking and feeding areas.

A dry cleanse disinfectant powder is added to the nest area each day after the straw is gone.

This helps keep the area clean and entices them to use the nest for resting and promotes dunging and urination on the slatted area of the pen near the drinkers.

The sloping wall in the nest and two sloping bars on the creep helps position the sow in the correct place.

A gap underneath the sloping wall provides an area where piglets can escape when the sow lies down.

A hatch in front of the nest area is lifted after day seven, so piglets can run through into the drinking and dunging area. It acts as an enrichment for the piglets.

Curtains were initially installed between the nest area and feeding, drinking and dunging area. However, they do not add to the design and are not requirements. 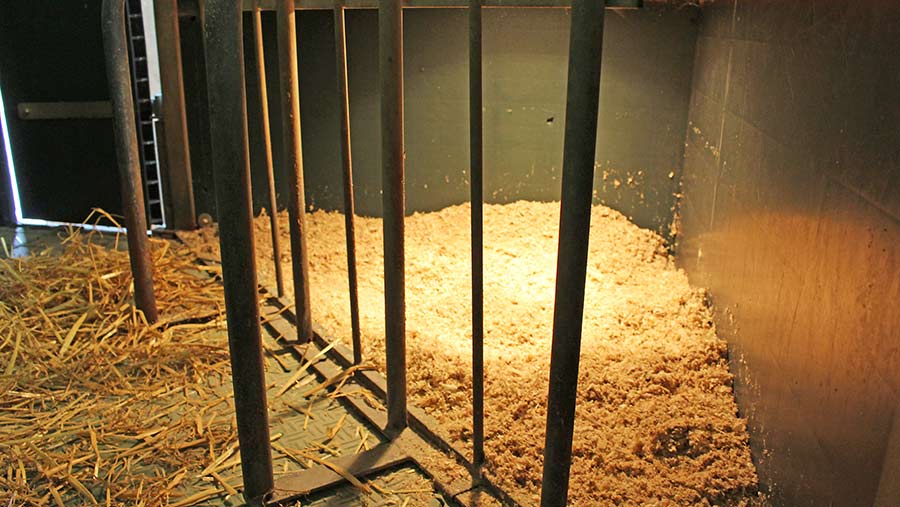 A fully open creep allows the piglets to escape easily. The floor is a solid rubber mat and is heated using a lamp.

If Mr Blomfield were to modify the design, he would add a guillotine in the creep area enabling piglets to be shut in and thus making stock tasks on the piglets easier.

The creep area is accessible from the main passage. Creep feed is introduced at day 10 and is fed on the floor of the creep, meaning the sow can’t access it.

Mr Blomfield says: “It’s important that people wanting to use PigSAFE pens follow the design and the correct space allowance that were developed during the project.

Any change can compromise the ability of the pen to work. It is also important staff are trained how to use the pens and the important thing is getting them used to humanising the sows and gilts.”