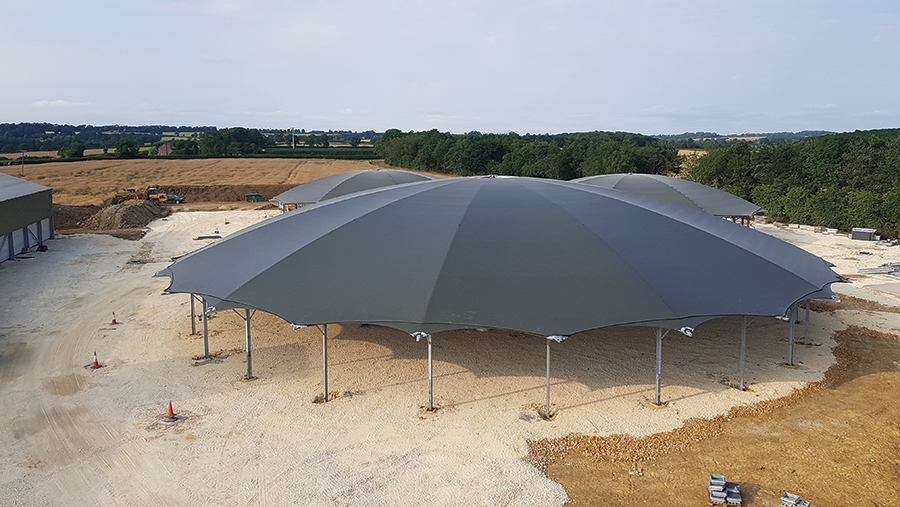 Farmer and entrepreneur David Shelton is nearing the end of building an entire beef and arable unit from scratch on a greenfield site in Leicestershire.

The site at Saxelbye Top Farm extends to about 283ha of pasture and arable land and Mr Shelton aims to grow crops and finish about 900-1,000 continental crosses once the mammoth engineering project has been completed.

The farmland had been sitting idle after the National Coal Board ceased operations there a few years ago, explains Mr Shelton.

Now though, it has undergone a transformation, with three roundhouse buildings, almost four miles of concrete track installed, 2.4ha of concrete laid, huge silage and feed clamps constructed and a range of other storage bins and buildings put in place.

At the heart of the operation are three enormous circular beef sheds in what is the largest single installation ever undertaken by framed building designer Simpson and Allison (S&A), which produces the roundhouse.

Two 30m and one 45m diameter roundhouse cattle sheds are nearing completion and dominate the central area of the farmstead.

The first beef cattle will be brought in from grazing in early October, says Mr Shelton, who is from a farming family but amassed a fortune selling cars.

After a career building up the Motorpoint Group, Mr Shelton was able to come back to agriculture and bought a farm adjoining the new site in 2012.

It was here that he first used a 30m roundhouse to finish continental cross cattle bought in at about 12 months old.

The conventional pole buildings were run down and a roundhouse offered a ready solution to the problem, he explains.

“We moved cattle into the roundhouse and straight away started to see benefits – the cattle were calmer, disease levels were minimal and growth rates rose above 1.5kg a day. 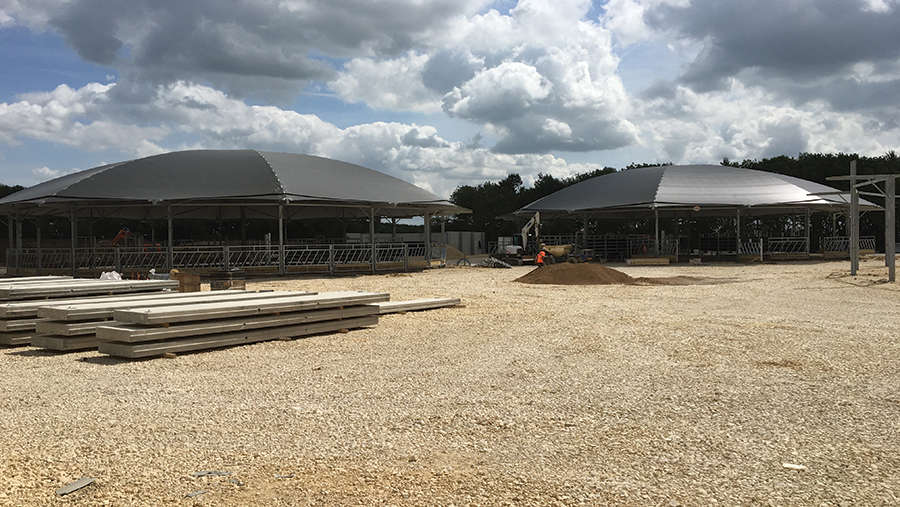 The improved performance in the cattle is the reason why Mr Shelton has opted for three of the circular houses at Saxelbye Top Farm, which he bought after the Motorpoint Group was floated on the stock exchange.

The farm’s arable area will produce some of the feed, while newly-constructed storage bins will hold maize, waste potatoes, brewers’ grains, sugar beet and wheat straw. This will be put through a Keenan mixer wagon and fed through the winter after housing.

This allows 4.7 sq m for each animal and provides a 60cm of feed space/head at the troughs, which run around the circumference of the circle.

Even at the higher stocking rates, the air in a roundhouse is fresher than the conventional building, even on still, mild foggy autumn days, Mr Shelton says.

Company founder and managing director of S&A, Geoff Simpson explains that this is due to the shape of the roundhouse, which aids natural ventilation.

The design means the whole building acts like a chimney.

As the cattle’s body heat warms the air in the open space under the roof, it rises, travelling, uninterrupted along the underside of the curved inner surface.

The warmed air exits the building through the hole around the centre pole at the top of the dome. The air exiting at the top is then replaced by cooler, fresh air drawn in through the open sides and this helps to reduce respiratory disease levels and boosting production.

The improved performance seen on Mr Shelton’s existing unit is in-line with expectations of a 15% uplift, Mr Simpson says.

A further reason for the improvement in performance could be due to the design’s effect on stress levels.

Farmers who bought units have noted that stock were calmer and that new stock quickly settled down.

Mr Simpson suggests this is due to the high-visibility open span and visual contact with the rest of the animals under the roof.

“It is also due to the wide open space around the whole circumference of the construction. Cattle can see all around them, mimicking a situation where a herd rests at grass,” he says. 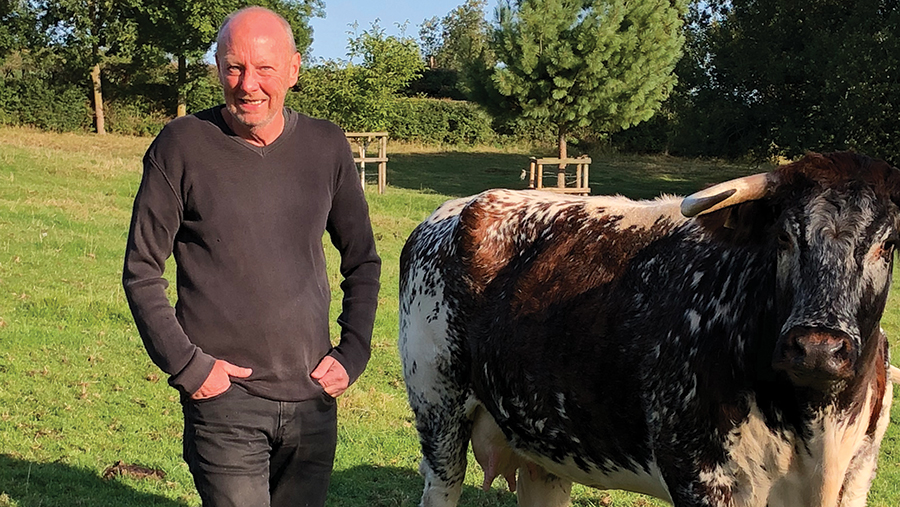 In summary, this is a 15-month build project inspired by the client David Shelton together with S&A, and grain drying specialist JW Installations, explains Mr Simpson.

Despite the long timespan for the project, the roundhouses have taken the least amount of time to construct and can typically be erected in as little as four days, he adds.

The 1t PVC-coated polyester roof is constructed on the ground and attached to the lattice rafters. The steel columns, located on the outer edge, are also attached during this phase.

Then the roof is slowly raised up on hydraulic rams and the outer supports swing in underneath it as the roof reaches the final height.

The sheer amount of concrete at the unit has caused additional hurdles. The Environment Agency has insisted that two large balancing ponds and attenuated storage were installed to ensure run-off from the large concrete areas is contained.

In all there is around 2.4ha of concrete under the roundhouses, clamps and storage bins along with an additional four miles of newly-laid concrete farm tracks.

With the excavation bill to create drainage, balancing ponds and storage tanks for run-off higher than originally envisaged, the projected final total cost will be more than £3m, says Mr Shelton.

The bill for concrete is about £100,000/acre, while the total for feed clamps, grain drying and grain storage facility will break the £1m mark.