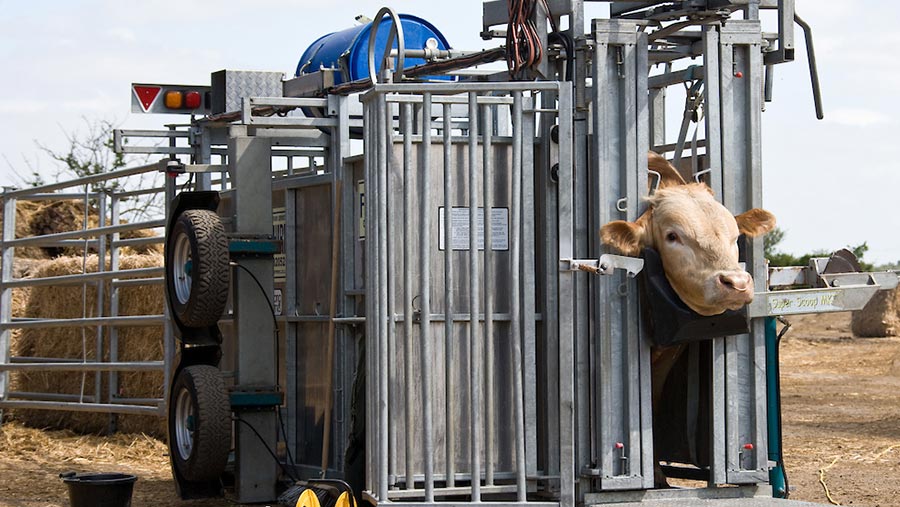 Understanding how cattle perceive their environment could make handling them a more enjoyable experience, according to Miriam Parker, director of Livestockwise.

“Have you ever looked at your handling system from a cows’ perspective?” she asked visitors to a National Beef Association weaning management and cattle handling farm walk, Larne, Northern Ireland.

“Cattle are grazing, prey species, making them highly sensitive to their surrounding environment – something which must be taken into account when designing handling systems.”

See also: More on housing and handling from Farmers Weekly

Ms Parker challenged visitors to experience the world from a cow’s perspective by wearing a pair of goggles that simulated how the animal viewed its surroundings.

“Cows have tunnel binocular vision, limiting their view and essentially making them partially blind,” she said. This coupled with the fact they are a prey species, makes them highly sensitive to surrounding distractions.

Because farmers using the cow vision goggles were unable to work out what was in front of them, they were forced to slow as they approached the crush, explaining why cows can be cautious upon entering a system.

“My top tip of the day is to make sure systems are set up so cattle can clearly see where they need to go. A lot of gadgets in a crush can put cows off making them slow up.”

In a basic handling system with open hurdles and a crush at one end, there is often a point just before the crush where the animal won’t go in, possibly due to distractions through the bars.

Blanking off barred handling gates so the sides are solid, can help remove surrounding distractions and focus cattle on the direction you want them to move in.

“At the crush entrance, try tying a board to the fence and see the effect it has on cow flow,” she said.

Getting the race entrance angle correct is also essential. “‘V’ shaped systems where cattle are funnelled into the crush can often cause issues with cow flow, as the only time an animal can see where it is going is when it is lined up directly with the crush.”

Rather than creating a funnel shape, one hurdle should be placed at 90 degrees to the crush and the other at 30 degrees. This, along with good flooring and solid sides on entrance, will create optimum cow flow.

Creating a stress free environment, where cattle know exactly how to move through the system, will also help with future experiences and make handling a more pleasurable experience for both animal and handler.

“Often the reason farmers decide not to weigh stock is because of the hassle of handling them. However, when you use the system more regularly, they are more likely to go through – when the only time you handle them is to give them a jab, they will soon learn.”

“Weaning time is important imprinting time, so it is well worth sending cattle through the system a couple of times and doing a few tasks at a time. It may sound hard work, but they will go through easier in the long run.”

“Rather than working with a group of 10-15 animals, split them down to five. In large groups, the cow at the back could be waiting for some time – increasing her heart rate and making her harder to move.

“Think about how you feel at an airport – when you’re kept moving you feel better because you feel you’re doing something – it’s the same principle with cattle.”