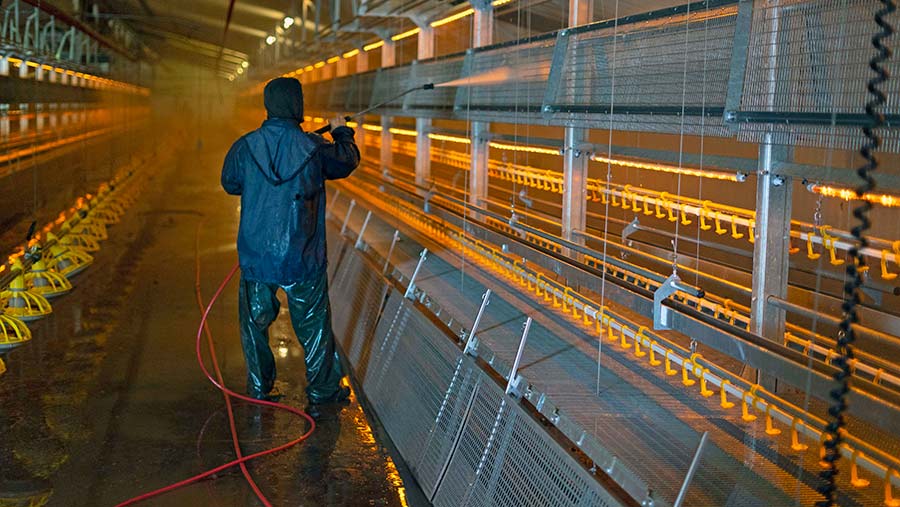 Margins are tight in poultry production, and a traditional pinch point where savings can be found has often been pullet rearing, where farms often forgo specialist equipment in favour of keeping things simple and low cost.

But as hen houses become more complex, with multi-tier systems now the norm, it makes sense to attune birds to the lay environment in their first few weeks.

Many pullets are still reared in the traditional two-dimensional environment of the shed floor.

As a result, at transfer to a multi-tier shed, they can find it difficult to locate feed and water, or nest boxes where they should be laying eggs.

This potentially leaves farmers with the unenviable task of lifting thousands of birds on to perches every evening and collecting floor eggs, which are lower in value if useable at all.

To combat this, rearers introduced tables and perches that give birds the chance to experience life at different levels before they moved on to multi-tier systems.

On the continent, where multi-tier production is more established, a plethora of systems have emerged to help pullets learn to live at different levels when in lay.

Some, however, have encountered problems in the UK with RSPCA Assured, which regulates most free-range hen production in the UK and has been uncomfortable approving systems that enclose very young chicks.

It allows birds to be brooded from day one on the bottom tier of three in total and, if rearing to RSPCA standards, the tier can be left partly open so chicks can move up and down the system if they wish.

Feed and water are provided at this level, which gets birds used to multi-tier systems from the outset.

The farm itself has nine houses and can rear 38,000 birds in each if producing to the RSPCA standard, or 51,000 if rearing a barn bird to European regulations.

Extra perching has been added for the Landmeco’s debut in the UK at the request of the RSPCA.

The farm has had one flock through the system to date, and Oaklands rearing manager Lorna Sinkinson says the set-up has been straightforward. 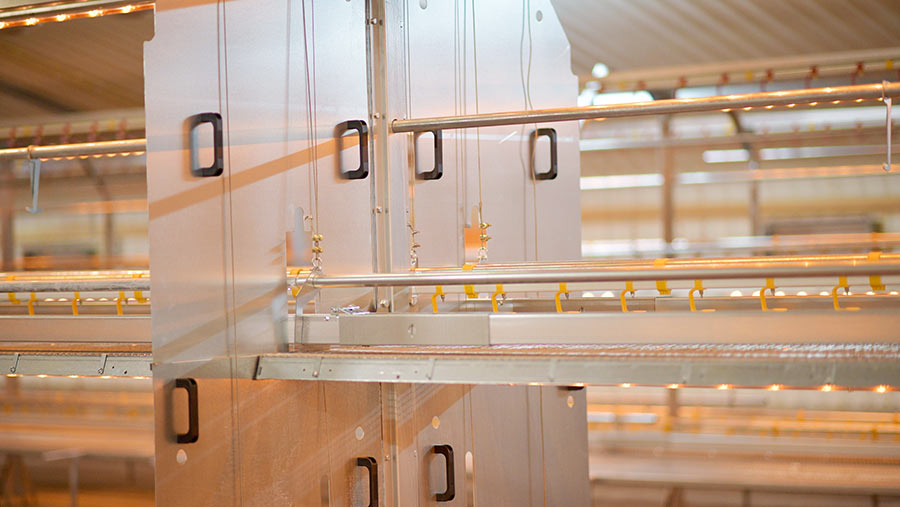 Birds have access to feed and water, helping the transition to life on multi-tier laying systems © Draper Group

Rearing birds in a system allows them to identify it as home, says Draper Layers’ Dean Llewellyn.

If chicks are brooded on the floor and then given tables or perches to jump up to, more dominant birds stop others accessing the system.

It means two-thirds of the birds are used to the floor, and it is more likely that they will lay eggs on the floor as well.

The birds in the Landmeco system were able to learn to jump and used the perches almost straight away.

When you first put them in, they just don’t go too far away from food and water. Then they begin to get adventurous.

They start running up and down, flapping their wings, before beginning to use the system more.

Another thing that tends to happen is if the birds then become brave enough, they all want to go to the top after a number of weeks.

“Then you have two-thirds of the birds on the top third of a system and they never want to come down.

That can lead to birds jumping from height before they are ready, potentially damaging keelbones in the process.

At turnaround, the feed track and water trays can be lifted, and the wings of the system lifted, making for easy cleaning.

Converting a broiler unit to one for rearing pullets is not completely straightforward when it comes to ventilation, according to Draper Care’s Justin Emery.

While the sheds on Perry Farm were unusually tall for a broiler operation, which left plenty of room to fit equipment, having large obstacles in place where before there were none fundamentally changes how air moves within the structure.

Mr Emery has worked with the farm managers to identify how to get air moving through sheds properly.

“For a pullet, it is about having plenty of fresh air, but it has to applied in a way that does not chill them or affect how the birds are using the systems,” he says.

Part of the process with this farm, which is ventilated from the ceiling, has seen smoke testing to find where air is entering and leaving. Even the position and orientation of lighting makes a difference.

The trick is to get a good rotation of air that is appropriate for the birds’ age: “If you get that right, then you will keep the litter dry,” he says.