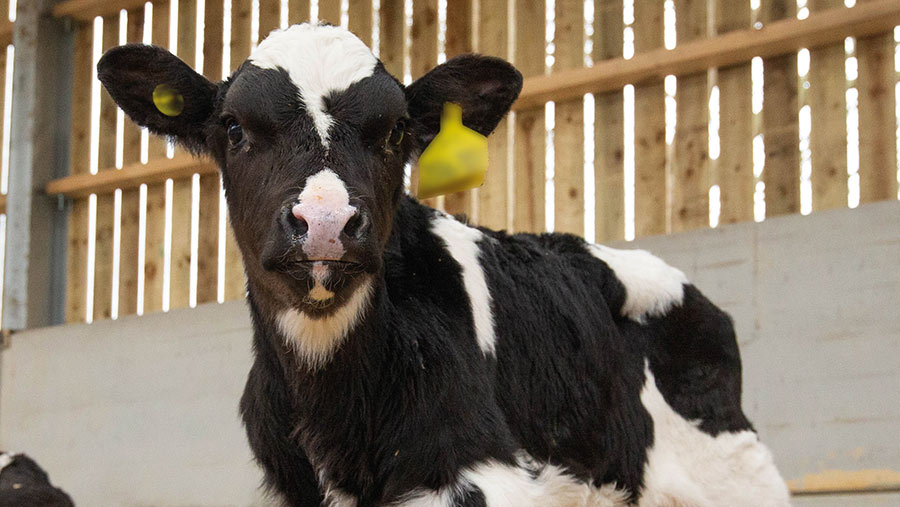 Numerous calf housing options are available and it can be difficult to decide which would suit your farm.

Farmers Weekly asked five farmers to set out the pros and cons of their systems to help you decide. 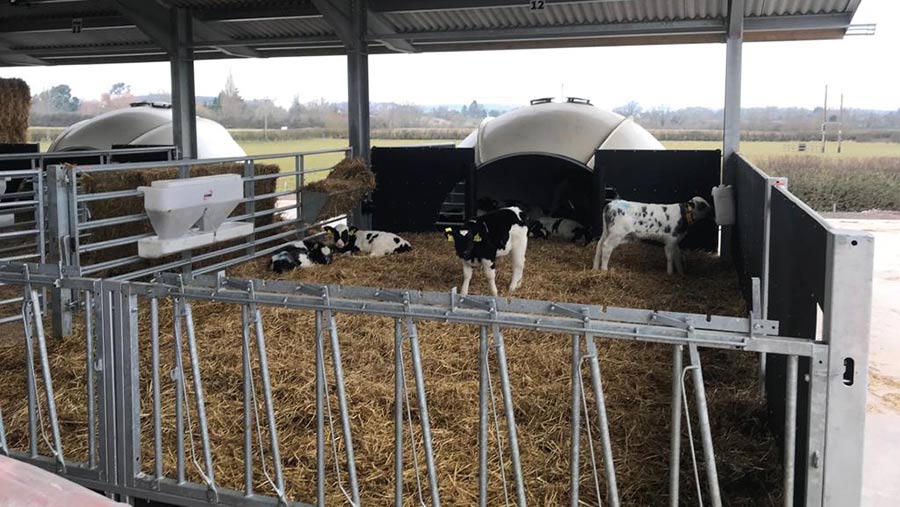 After two years of researching systems, Rob and Hannah Collins decided that domed, fibreglass igloos were the obvious choice for their new calf-rearing business.

With only a small existing shed on the greenfield site, the Collinses were keen to put up permanent structures and maximise calf health and performance.

“We were not driven by cost, but performance,” says Mr Collins.

They now have two calf-rearing buildings and a weaning building, each on a concrete base. 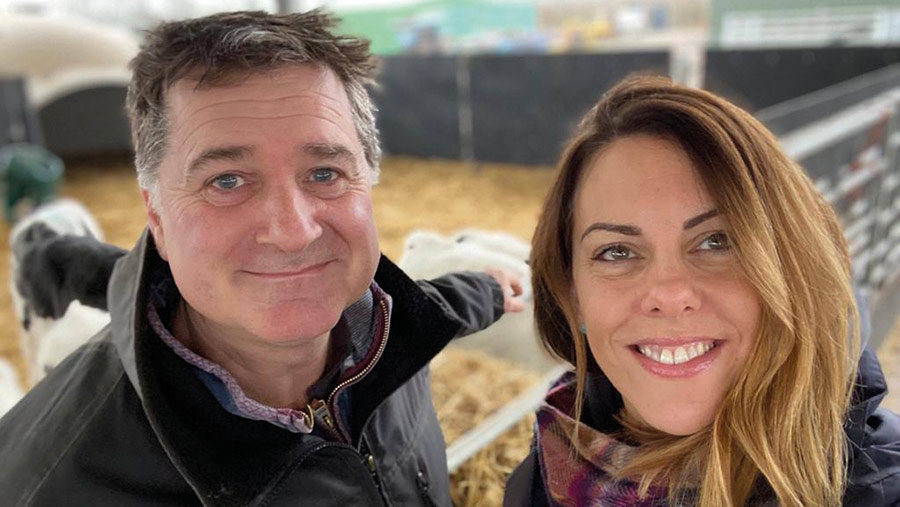 Each rearing system has four pens, with one igloo and 15 calves, together with an automated milk machine stall. Each pen has locking head yokes.

The buildings are open with 3m height to the eaves. Calves can shelter in the igloos, which are positioned around the edge, or go into a pen at the front. The weaned shed is 4m to the eaves, with two igloos for 30 calves.

Since 2018, the unit has had an average mortality rate of 0.5%. Mr Collins puts this down to the environment in the igloos, feeding and good husbandry.

✅ Good ventilation – testing has shown the air changes every 15 minutes in the igloos
✅ The igloos can be moved, and it’s also possible to get moveable “verandas”
✅ Easy to clean – can be picked up with the loader and power-washed
❌ In windy or cold conditions, straw bales may be needed for protection

With rising costs, Mr Collins admits if he did it now, he would question spending the same. Instead, he would look at building a less permanent structure for the igloos himself, which would be cheaper. 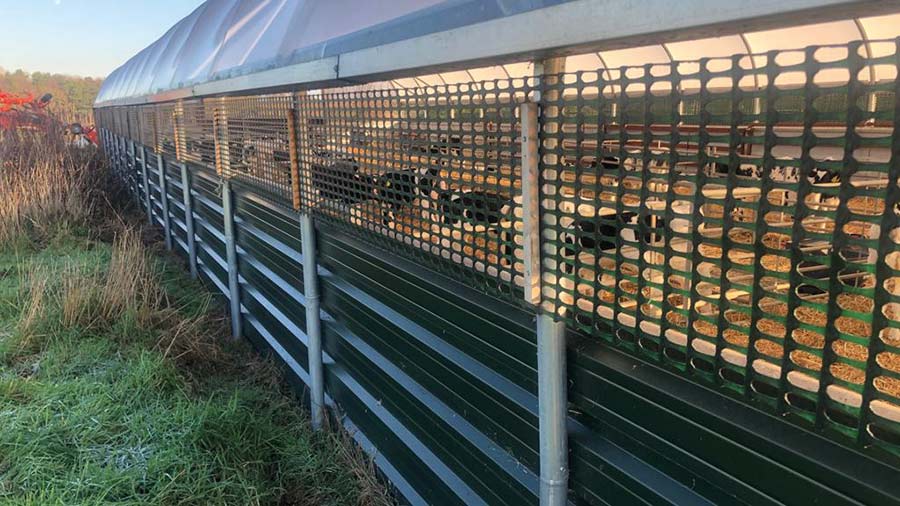 When Michael Oakley decided to make better use of an existing shed housing youngstock and convert it to dry cow cubicles, polytunnels proved a cost-effective alternative for calf rearing.

Mr Oakley and his son, Miles, now have three polytunnels on a hardcore base, with plans in place for a fourth. 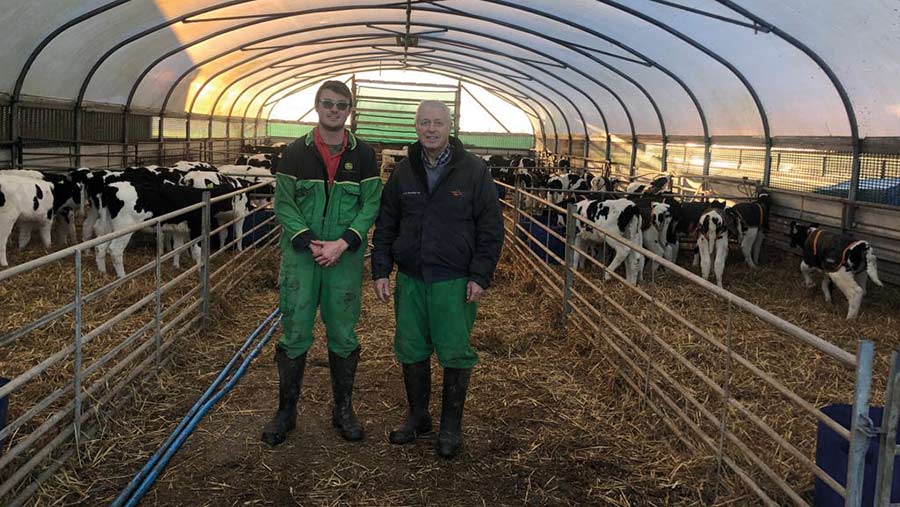 Each polytunnel is 25x9m and includes seven pens of nine to 10 calves. There is 1m of sheeted tin along the side, and 0.5m of mesh with 3.8cm holes above it.

Guttering is above this, and then clear plastic sheeting over hoops, which makes the roof. Two air vents provide an air outlet.

Mr Oakley says: “There’s never any smell or stale air, as you have the mesh right around the polytunnel.” The farm has a pneumonia rate of 2% to weaning and a mortality rate of 1%.

✅ Low capital investment
✅ Classed as a temporary structure
✅ Quick to put up – took four to five days to erect on a prepared site
❌ May be limited to 9m width
❌ Can get warm in the summer, even with the sheeted gates open 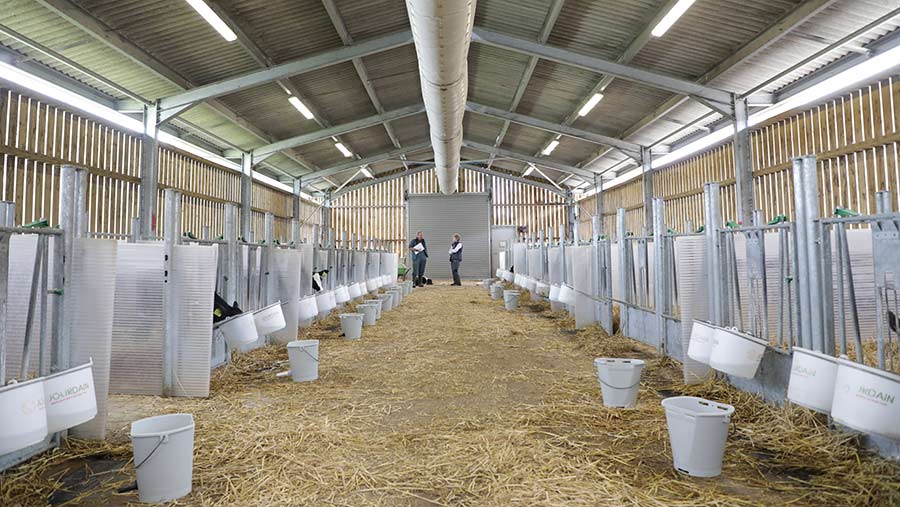 When Robert and Bryony Symms and their son, Jake, started to run out of space for hutches, they decided to invest in a calf shed to meet their requirements.

A farm assurance inspection had raised the fact calves were unable to touch each other in single hutches.

There was also not enough space to add on the additional number of hutches needed. As a result, the Symms family decided to build a 29×9.6m shed for 40 calves. 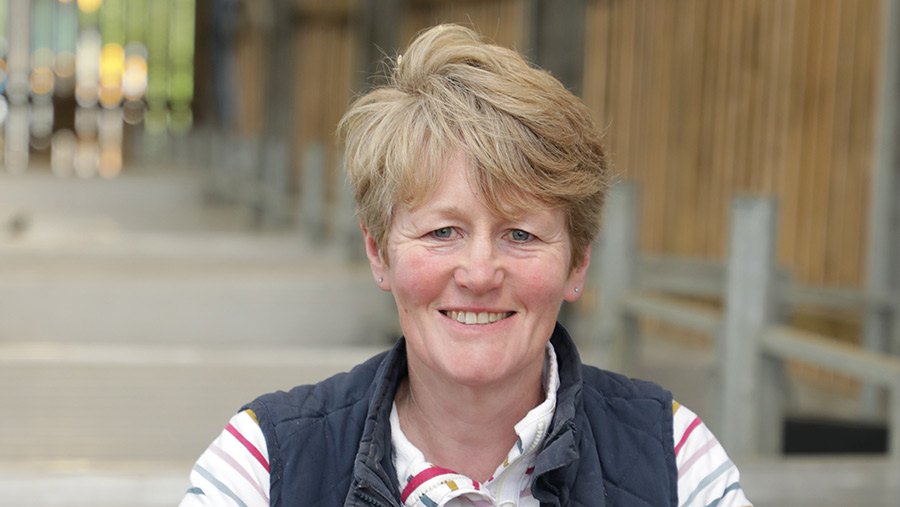 Key attributes of the shed include:

✅ The building meets the Symms family’s requirements
✅ Concrete floor means the shed is easy to clean and disinfect
✅ Drier environment for calves and people compared with uncovered hutchesm, so less bedding is used
❌ Bryony Symms believes pneumonia is harder to manage in a building than in hutches, where it’s easier to stop disease from spreading as calves aren’t housed together
❌ The shed doesn’t have curtains. Mrs Symms says curtains would be useful when it gets hot

£90,000, including the building, pens, PPTV and electrics 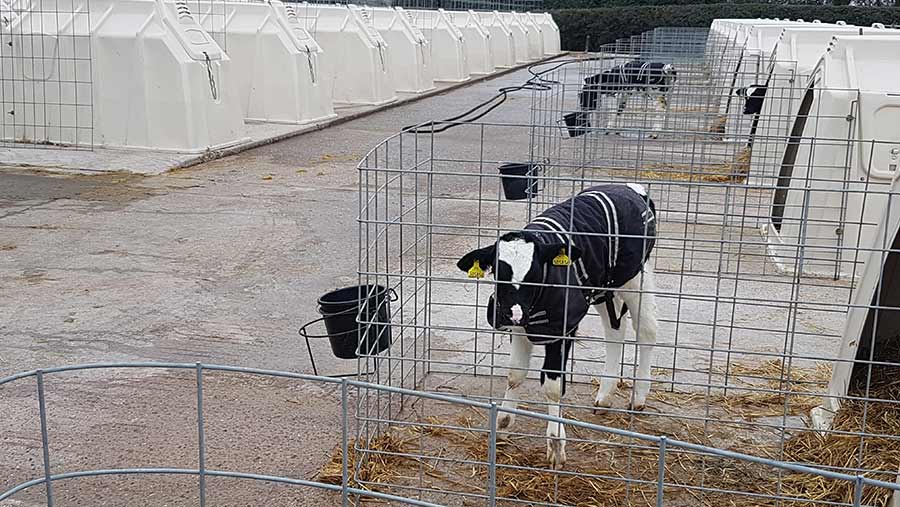 Neville Kirkham has housed calves in individual hutches for the first three weeks of life for the past 20 years and sees it as the best way to manage baby calves.

Hutches are rectangular, plastic houses. Small hutches can house individual calves or larger hutches are available for those preferring to keep calves in pairs or groups. 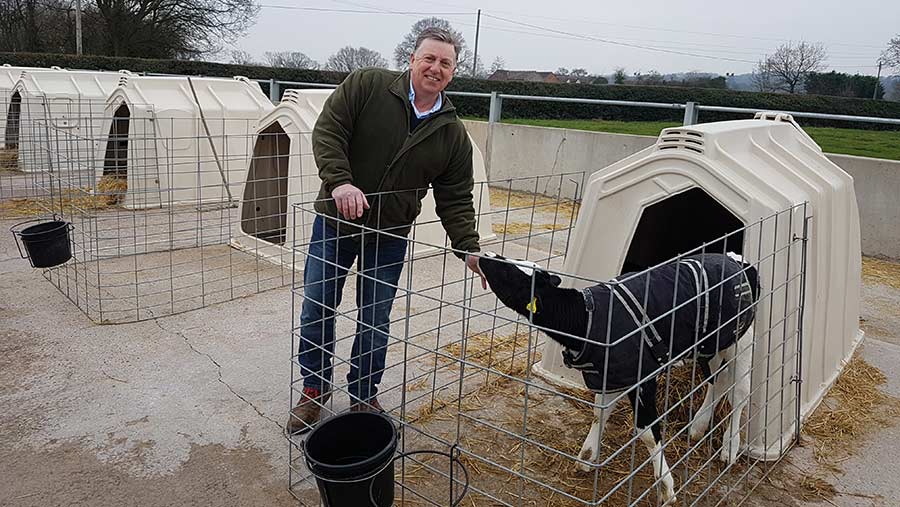 At Rushey Field Farm, individual hutches are positioned in four rows on a concrete pad. Each hutch has its own outside pen.

Mr Kirkham thinks the setup provides the best of both worlds. “I believe it must be a natural environment, where the calf can decide where it needs to be – indoors or outdoors.”

✅ The calf has a choice whether to be inside or out
✅ If a calf is sick, it is contained in one area
❌ Individual hutches may mean more time is required for feeding and cleaning
❌ More space is needed than for a conventional shed
❌ Individual hutches are unsuitable for some milk contracts, which stipulate calves are kept in pairs throughout. Red Tractor assurance says calves over eight weeks old should be housed in groups of two or more 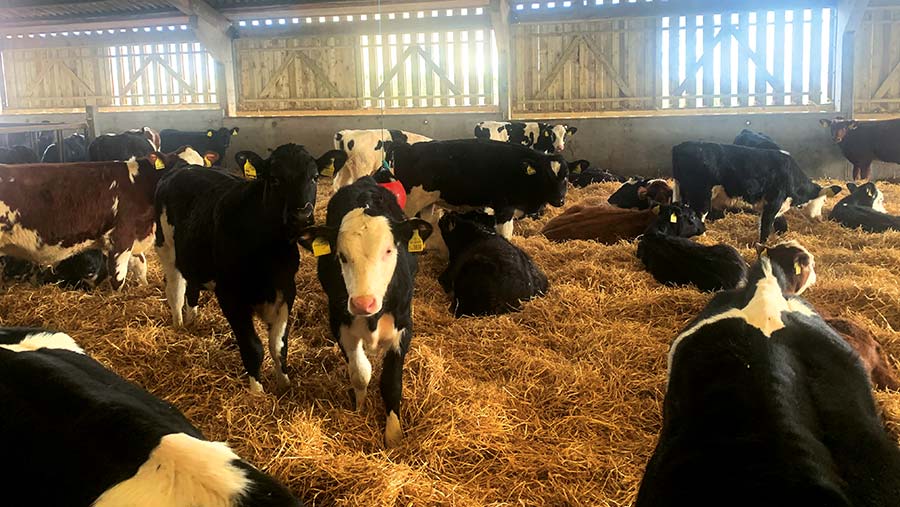 Kenton and Charlotte Bennett have chosen to adapt existing buildings with the aim of rearing healthy calves in a cheap system.

Calves are housed in a range of buildings that have been renovated to improve ventilation. In an old brick building with a slate roof, the windows have been taken out.

Sheets of plyboard have been cut so they can be tied up with twine to block the gap if the wind is strong.

Second-hand timbers and “stuff that had been lying about” have been used, making the cost “peanuts”. 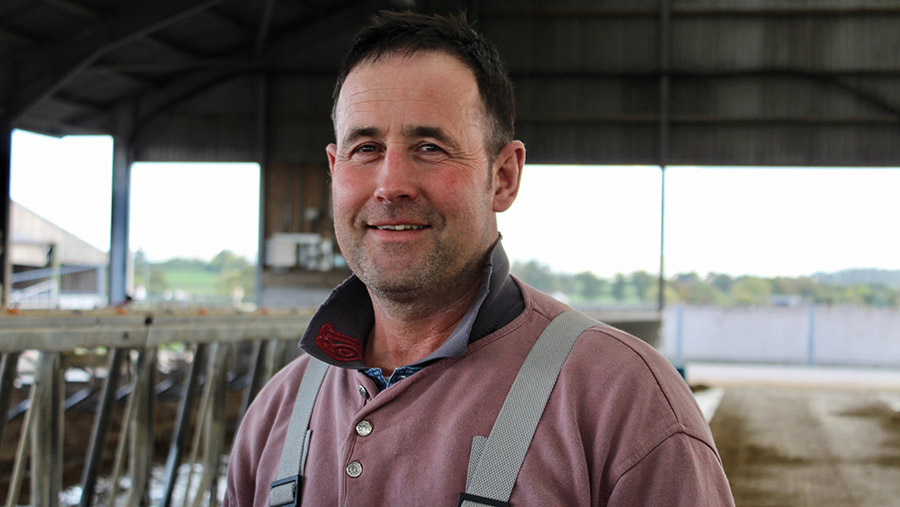 In another shed, fibre cement sheeting has been taken off and a mix of old and new space boarding installed with 50mm gaps between, as well as a home-made “sliding louvre”.

An old chicken shed extractor fan has also been installed. The ridge has been lifted using 50x100mm timber struts.

An additional site, which had been used for straw storage, bulling heifers and dry cows, has been converted to house heifer calves on a computerised milk-feeding system.

Two apex buildings sitting side by side meant air flow was a problem. A £1,800 extractor fan has been installed with a 40% grant to tackle the issue.

Gates that were no longer in use elsewhere were then used to create pens.

✅ Didn’t cost much
✅ As research is always changing, you can adapt the system as you go and won’t have lost money putting up a new shed
❌  The setup relies on manually opening and shutting doors
❌ It’s always a compromise

Design and manage everything around the calf

A few thousand pounds plus materials lying around the farm, and time.