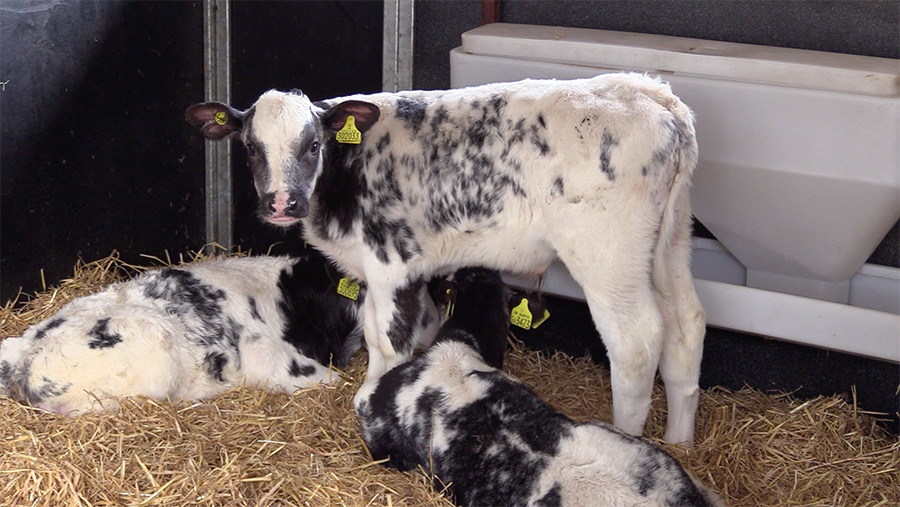 Calves reared in a specific youngstock unit are growing 100g/day faster during the 20-120-day phase in early trial work.

The High Health Unit (HHU) prototype has been trialled for two years on a calf rearing unit at Long Lane Farm, near Frome in Somerset, where it was first designed by the late Tim Walwin, a calf rearer with over 50 years’ experience.

Growth rate data shows calves achieve an average daily liveweight gain of 1.15kg a day, between the age of 20 and 120 days in the HHU.

This is 100g a day higher, than in conventional general-purpose livestock sheds on the same farm across the yard, at a 0.5% morality rate.

After five initial prototypes and two minor redesigns during the trial period, the design is now commercially available.

Recent improvements include, a rear flap to control air flow at the back of the shed during cold weather and recycled plastic stock board being used as segregation boards in between each pod due to its strength and lightweight qualities. 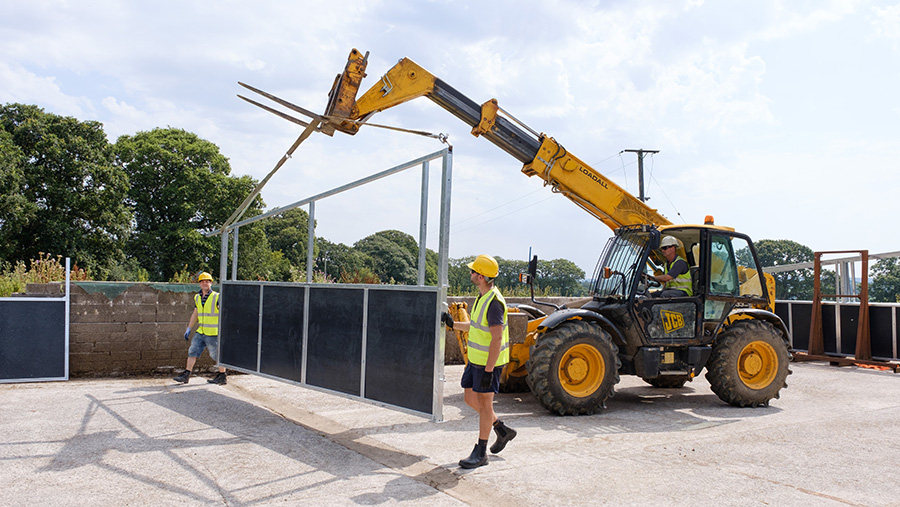 The pods can be erected on farm by farmers in a few hours.

Gabby Emery of Buitelaar’s Tech Team, explains that to ensure airflow is achieved systems should start with a minimum of two pods and not have more than ten in a line.

The sheds can be erected anywhere relatively sheltered and away from other farm buildings to allow air to circulate into the pens. 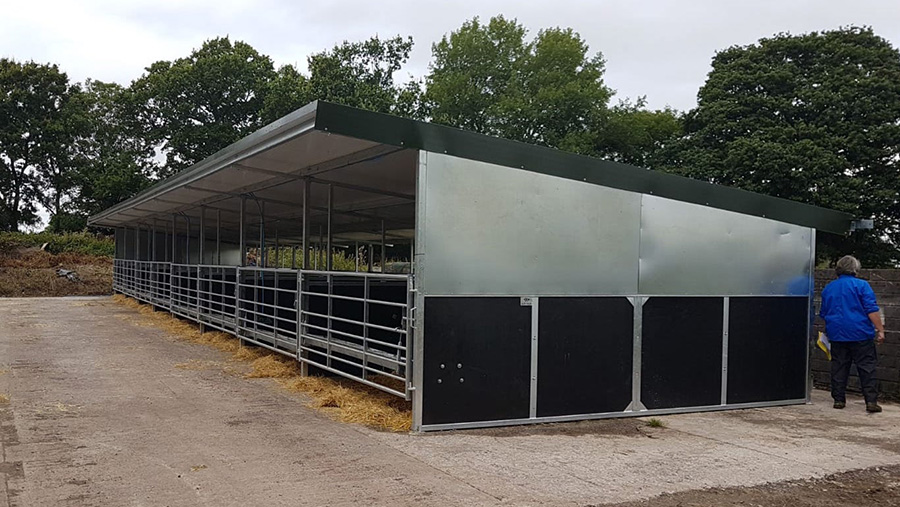 Farms must have a solid concrete base to secure the front of the unit by screwing it into the floor, but it can stand on hardcore or concrete, she explains.

“The key design feature is the low roof because young calves don’t generate the same heat and stack effect that older cattle do,” says Ms Emery.

“The gradient of the roof helps draw fresh air in, which doesn’t happen in multi-purpose livestock sheds with high roofs.” 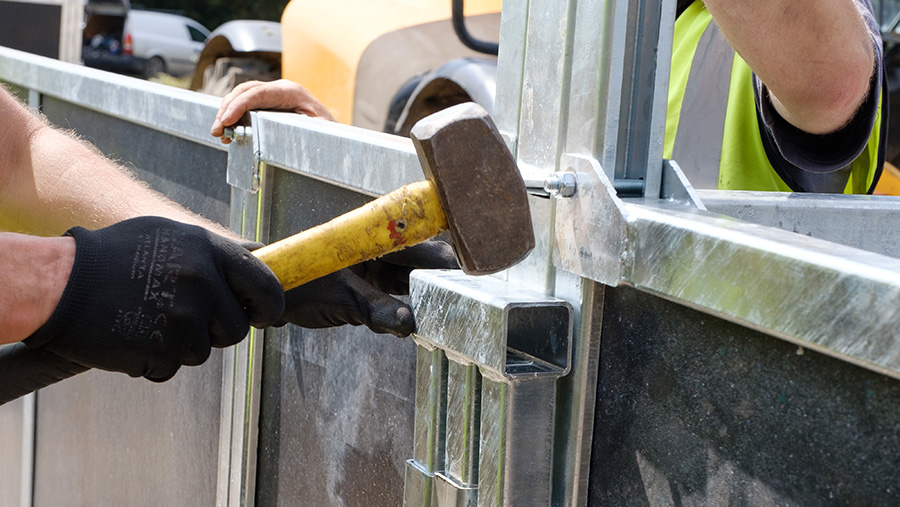 The modular design is advised to extend between two and 10 pods in a line.

A telehandler is required for construction, but the idea is farms erect units themselves, she adds.

Airflow
The roof is pitched at a 45deg angle, sloping upwards from the rear. This helps draw fresh air in to replace stale air.

The shed is completely open in normal conditions at the front and rear of the shed. The rear back boards are 1.24m high, meaning no drafts at calf level. 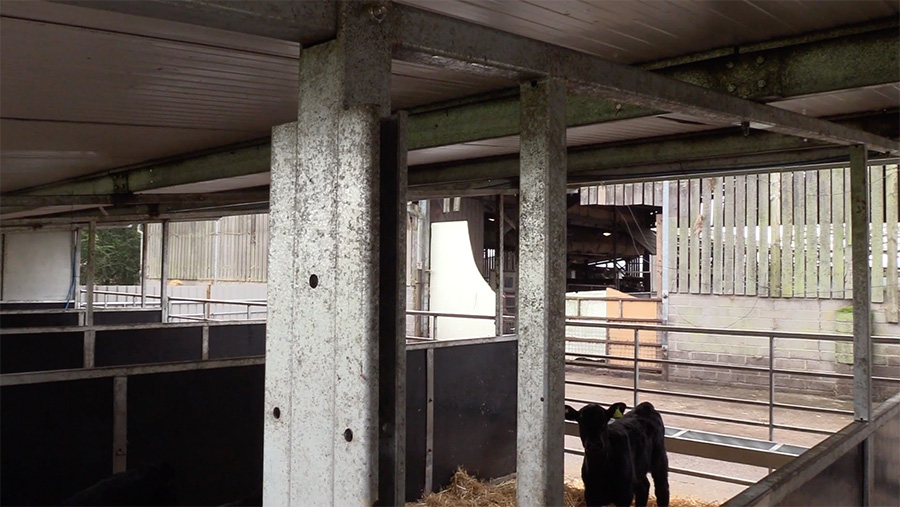 A sloped roof assists in drawing fresh air into the unit 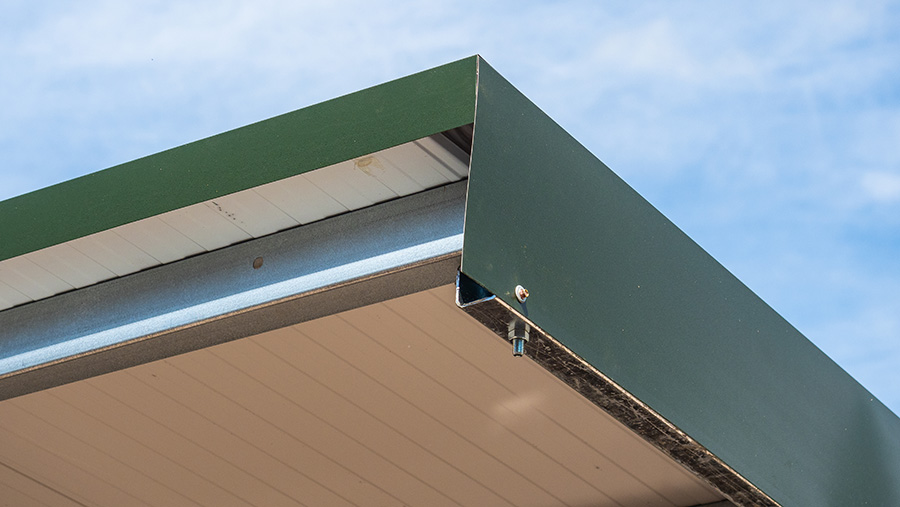 A stable temperature is provided in summer and winter by a non-drip insulated roof.

Insulated roof
A non-drip insulation material is housed inside the sloping roof. This helps stabilise temperatures, keeping it warm in winter and cool in the summer.

Easily cleaned
All surfaces are stainless steel or plastic, meaning the units can be easily cleaned and disinfected between batches.

Grouping
Calves are grouped in the units upon entry at three weeks of age. Grouping calves has been shown in scientific trials to result in better growth rates due to competition for feed.

It also increases animals’ socialisation skills, which helps them integrate into new groups when regrouped at pasture or in feedlots.

Automatically refilling when calves need to drink, they save on labour, spillages, reduce the risk of disease transfer through water and are easily cleaned out compared to buckets.

The units take in calves from dairy units at three weeks old, on a 42-day milk plan feeding 25kg of milk powder a calf. Calves are fed a 16-17% crude protein calf rearer pellet on an ad-lib basis.

Over 500 calves have been through the system, with a week rest period between each batch and 3.5 batches are grown in a year.

Calves are weaned at around 90kg after six-to-seven weeks in the unit at ten weeks old, averaging 0.9kg/day at weaning and 1.1kg thereafter.

Calves are bedded up daily with barley straw.

Health protocols are planned by vets at Synergy Farm Health. All calves enter the unit after receiving 10% of body weight in colostrum in the first three-to-four hours of life at the dairy farms where they are born.

All calves are vaccinated with a four-in-one vaccine covering parainfluenza 3, bovine respiratory syncytial and bovine viral diarrhoea viruses, as well as Mannheamia haemolytica serotype A1, with a follow-up booster given two weeks later.

After weaning calves are given a live marker vaccine for infectious bovine rhinotracheitis.

Approximately one third of calves through the unit have been dairy bulls which are kept entire, a third have been a mix of Angus-cross and a third blue-cross steers and heifers.

Calves are sold on to finishing farms for grazing or intensive finishing at 150kg.