When Richard Spencer sold 4.4ha of farmland for residential development, it was an opportunity to relocate the farmyard and build new housing for his beef herd.

Mr Spencer, who farms with his father, John, needed a shed to hold 80 suckler cows and followers on a greenfield site at Mansell Farm, Newbold-on-Stour.

He opted to have two mono-pitch steel portal frame buildings facing each other.

But it means cattle are easy to manage in their new environment and there have been no cases of pneumonia since the cattle occupied the buildings.

How did you set about choosing the design?

We wanted a simple design, something that was suitable for a one-man system. It needed to have good ventilation and to hold up to 200 cattle of different age groups.

We chose two identical single-span sheds and constructed these opposite each other so in fact it looks like one shed with a 2.4m gap between the overhangs.

The environment is very airy and the layout lends itself well to handling different groups.

What are the shed’s dimensions?

At capacity, we can house 180-200 cattle, including calves and followers.

What is the building made of?

The frame is galvanised steel and the roof is fibre cement sheeting with clear plastic corrugated skylights.

The walls are a combination of Yorkshire boarding and concrete panelling. The bedded areas have compacted stone floors. 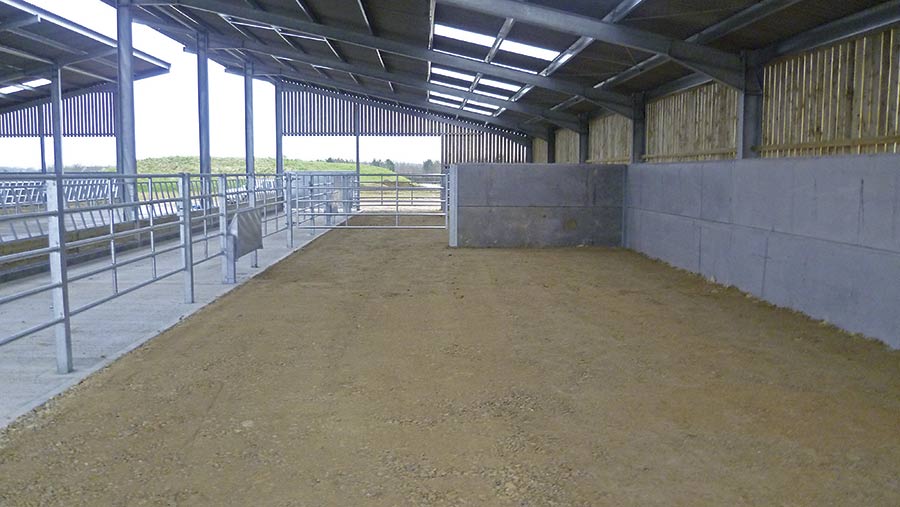 How is the shed laid out?

Each side has six bays and the straw-bedded areas can be shut off from the feed passageway, which means we can hold the cattle in those pens when we scrape.

How much did the whole thing cost?

As it was a greenfield site we needed to get three-phase electricity from a point 200m away, so that cost us another £28,000.

The planning fee was £5,390. We created a track from the farmhouse down to the shed using our own limestone and that worked out at about £25,000.

We had an existing steel portal frame building at the old farmyard and spent another £18,690 relocating that.

Who was your supplier?

The shed was supplied by SA Mogg at Astwood Bank, Redditch, and constructed by Dudfield Farm Buildings at Stow-on-the-Wold.

The gating and barriers were from IAE, but supplied by Stow Ag. It took two months to complete. This has been our second winter using it.

Has it been a good investment?

It seems a lot of money for an 80-cow suckler herd, but we had the funds from the housing development and we wanted to continue with the beef enterprise.

If we hadn’t had the income from the development, we would not have been able to do it. 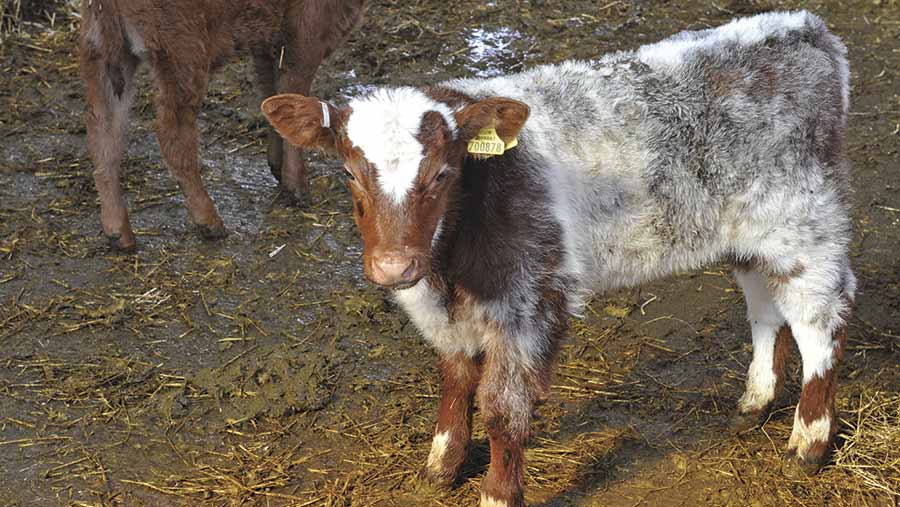 Dad does the mucking out. It takes him an hour a day to scrape and to run a straw chopper down each side.

It had been taking two men three hours to bed and feed 80 sucklers because the old housing set-up was a rabbit warren of buildings. We are now using about 750kg of straw a day.

The herd is mostly housed from September and out again by the end of March, but we have had to delay turnout this spring because it has been so wet and grass growth has been slow.

We muck out the bedding every six to eight weeks. The shed is laid out in a way that we can shut the cattle into the concrete passage while we do this.

How has it improved cattle health?

In our old buildings pneumonia and scours had been a big problem, but I’m happy to say we haven’t had a case for two winters.

We vaccinate for pneumonia. The cows get a rotavirus corona jab too and they pass that benefit on to their calves. 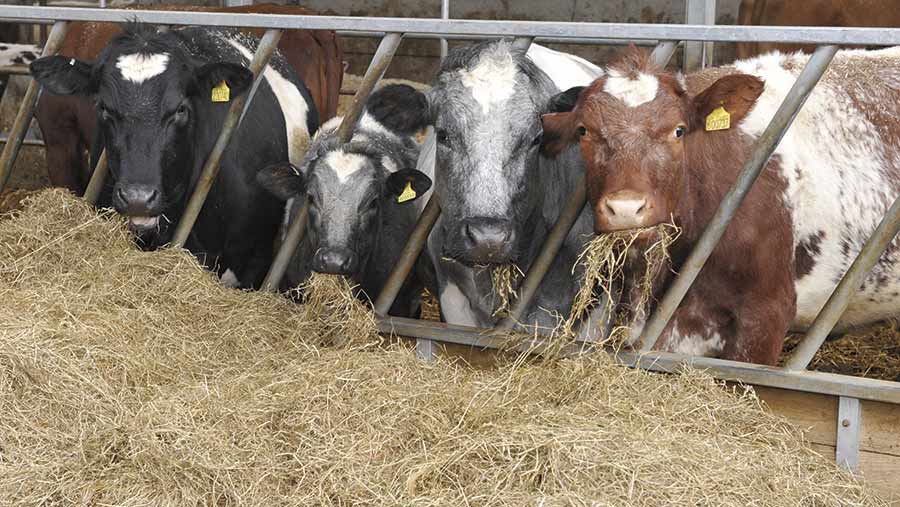 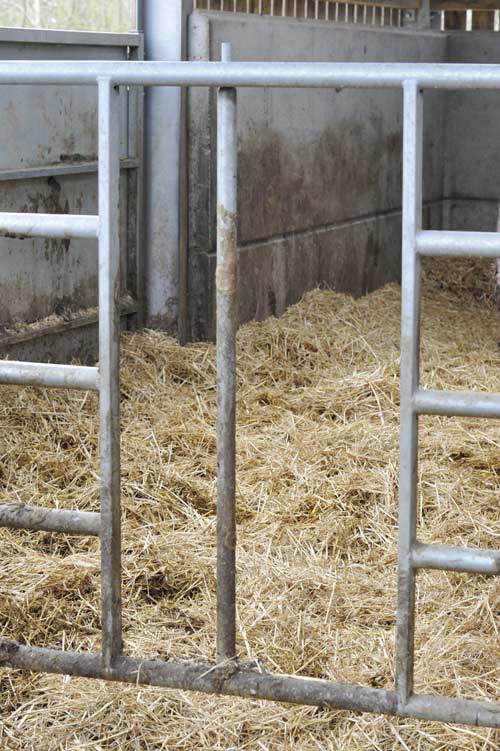 There are removable metal bars in the barriers of one of the pens which acts as a creep feeding passageway for calves.

They stay with their mothers, but they can come and go from a separate pen to get extra feed.

When we don’t have calves in that pen we use it to house our stock bulls.

The water troughs are positioned behind the feed barriers and we find that the cattle have a tendency to muck in them.

I didn’t want them on the back wall because I thought we would get more dirty bedding.

Also, if there had been a leak, the water would have soaked onto the bedding.

We have a temporary handling system, but ideally we would have a permanent area where we could isolate the cattle to PD and foot-trim them. 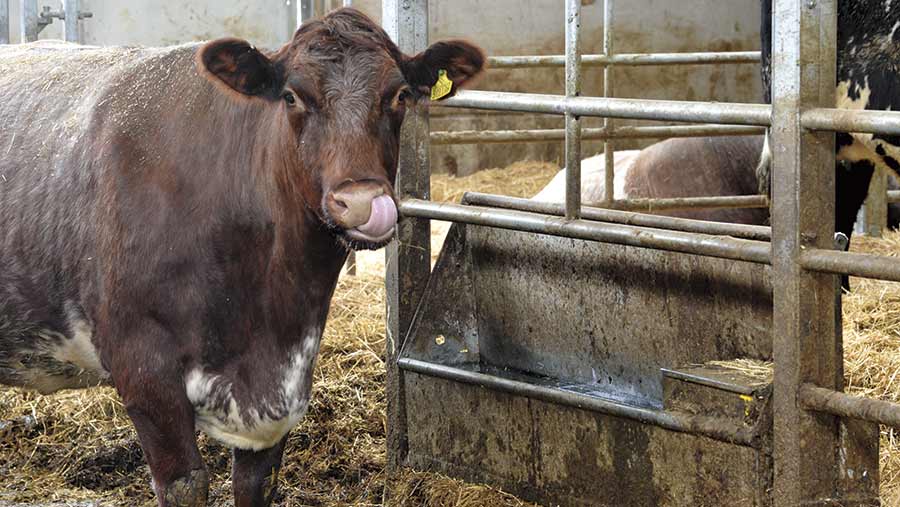 Have you made any changes since the shed was built?

We have fitted hardboard under the doors to stop badgers getting in. We had been TB-free for 10 years, but currently have a herd breakdown. 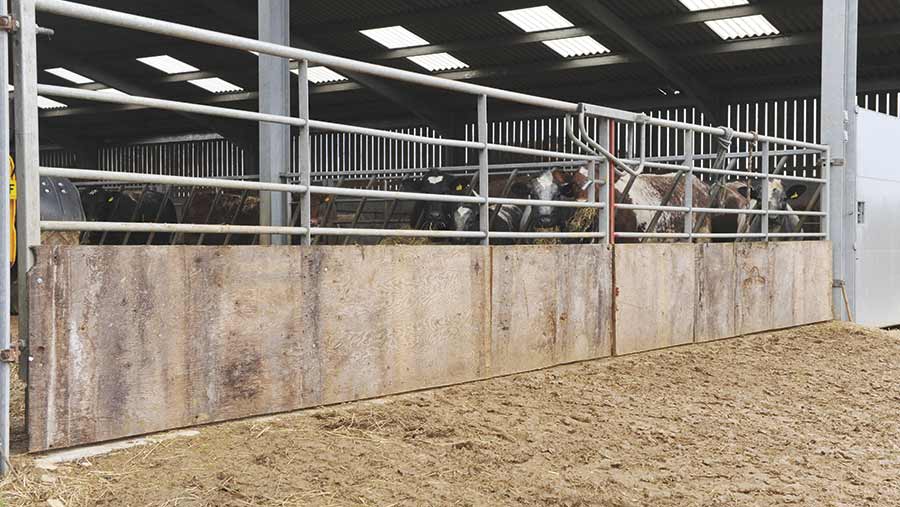 There are also bits that we need to finish. For instance, we created a manure store from some materials we had at the old site and will put a roof on that this year.