Manor Farm’s state-of-the-art beef shed in Oxfordshire was built at a cost of £160,000 and replaced a rundown cubicle shed.

The housing manages to accommodate 350 animals under one roof, while reducing labour and promoting better animal welfare.

We take a tour inside the shed to look at some of the highlights it has to offer.

Built in 2010, the shed took more than one year to plan, with W Cumber & Son’s farm manager, Neil Rowe, putting painstaking detail into every aspect of the shed’s design to maximise cow comfort and animal and staff welfare.

The building, initially housed the estate’s existing dairy herd of 100 Brown Swiss cows and made way for the new beef enterprise. 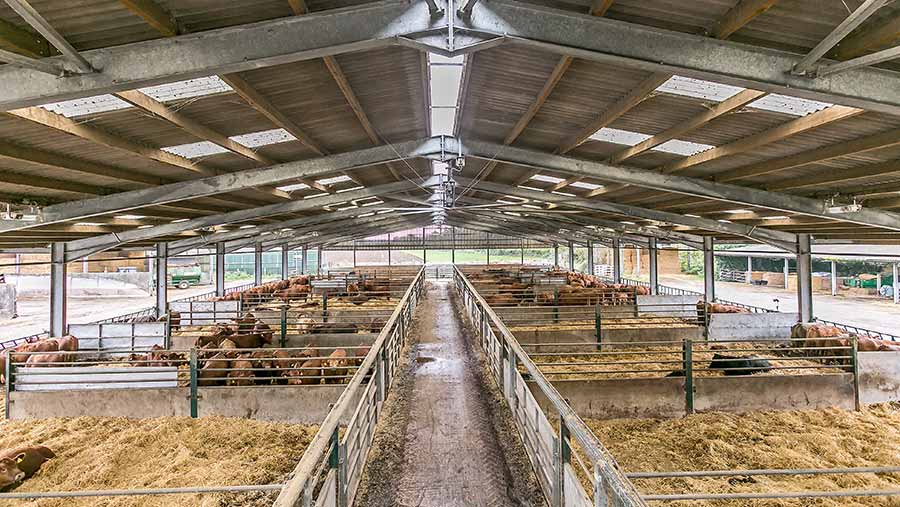 “We wanted to design a building with the cow in mind and we wanted to be as efficient as possible – particularly on fixed costs.”

See also: What’s in your livestock shed: A look at an £825K sheep shed

The aim at weaning is for a 630kg cow to wean a 400kg+ calf – so 65% of her bodyweight. Calves are weaned at nine months and the reason for the late weaning is to maximise weight gain from grass, says Mr Rowe.

“I also want to control condition score to avoid calving problems,” he adds. He assisted just four animals out of the last 100 cows that calved.

Realising the time saving one shed would offer, Mr Rowe wanted to build a single beef house that could house all stock – from cows and bulls to their offspring.

However, it flew in the face of industry advice.

“Academics said we couldn’t have all the animals in the same airspace because of the disease transmission and we would be stuck with high vaccination programmes and be forced to use lots of antibiotics.”

Determined not to be beaten, Mr Rowe has pioneered a beef house that accommodates the entire herd of 350 animals under one roof, with daily tasks of feeding and bedding taking just two hours.

The shed consists of 18 bays – nine on each side – with every bay measuring 20ft wide.

Six bays house breeding stock and calves and the other four are reserved for steers and heifers.

All animals face the outside of the shed, which not only reduces labour, but promotes better animal welfare, according to Mr Rowe. 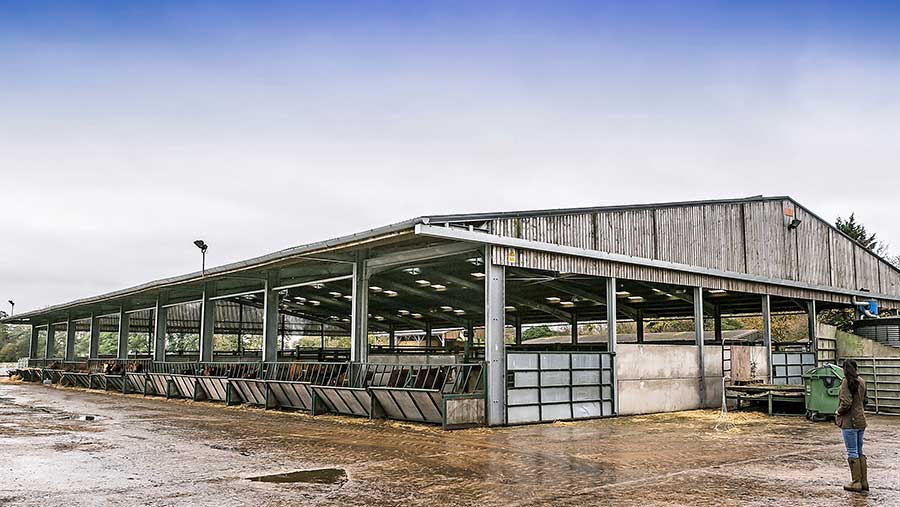 “Ninety per cent of the buildings I visit are the inside out,” explains Mr Rowe, who does farm consultancy. “Cows look in and immediately get a sense they are trapped in the building, so the first thing we did was turn the building the right way round.” 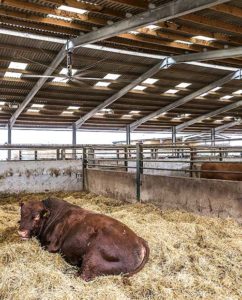 Each bay has lights that are controlled by a sensor to produce an extended day length of 16 hours using 300 luxe lights.

This is automatically followed by low-level red lighting at night that is just above the infra-red spectrum, which helps to promote better hormone production to increase cow fertility and calf growth rates.

Cows calve outside in September before being housed in the last week of October.

Having cows indoors for breeding in January means they can take advantage of the lights to maximise herd fertility.

Heifers are AI’d to high-index Stabiliser bulls and the highest genetic merit cows are also AI’d to carefully chosen bulls. The remainder of the herd is mated to stock bulls.

Lighting, along with good heat detection, means 96% of the herd are pregnant within 60 days and, this year, 68% of the herd calved in the first cycle.

However, Mr Rowe reckons this can be further improved by harnessing eartag technology and is currently considering using the heat detector SmartBow.

“They tell you when the heat started and give you an optimum insemination time.”

Two 26ft helicopter fans inside the shed are adjusted according to wind speed and humidity.

Fans are controlled through a box in the “technology shed”, which houses the farm’s water, fans and lighting control panels. 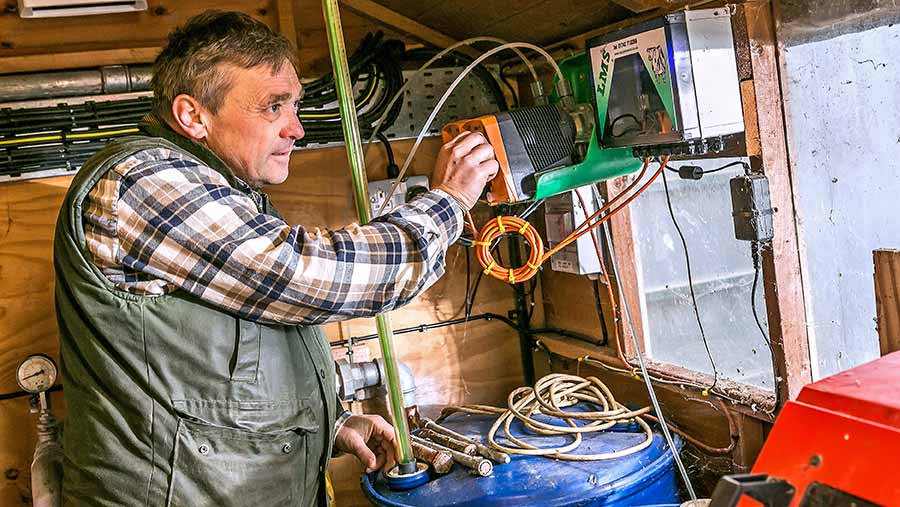 Together the fans help to prevent stale pockets of air by pushing air down and out of the sides of the building – the opposite of the stack effect, which draws fresh air in through side inlets. 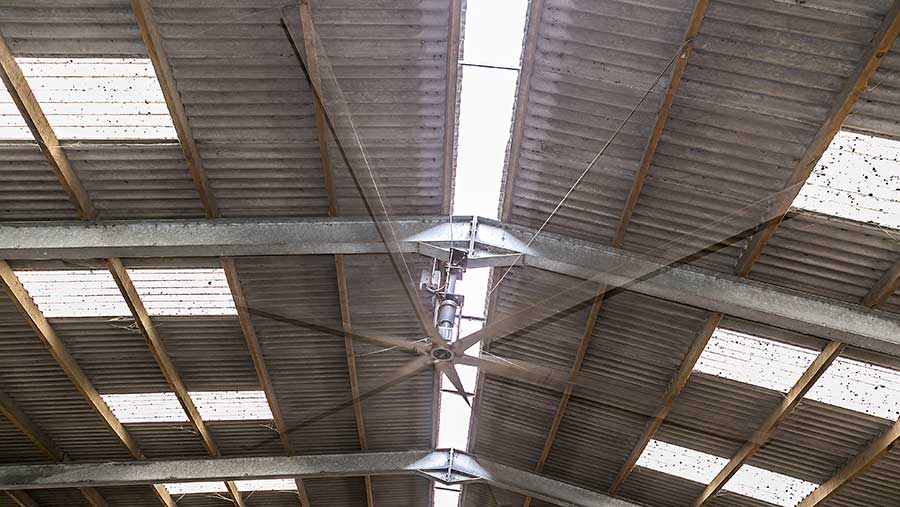 “The stack effect is hugely reliant on wind speed to create that effect and to suck the air out of the top. Inevitably, you end up with pockets of air where bacteria builds up.”

The theory is working, and along with strict health protocols – the herd is CHeCS-accredited – is helping Mr Rowe to lower overall antibiotics use – one of his founding aims when establishing the beef herd.

“We have injected only one animal a year for infectious disease.” 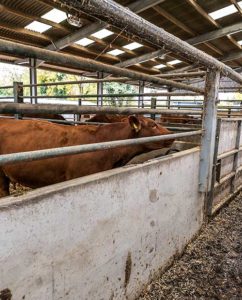 Another factor aiding air movement at cow level is the size of the walls inside the shed that separate pens, with walls built to a height of 1.2m only.

To reduce costs, rainwater is harvested from the roof, with two separate pipe feeds set up to supply the shed and grazing block.

Water is stored inside a 100,000-litre tank, which has a valve at the bottom to monitor the water level.

If it dips below a certain level, it is automatically topped up from the mains. Still, with 70% of the water supply coming from the roof, it is saving about £2,000/year on average.

Mr Rowe has also saved on a UV-system by turning to the Australian industry for advice.

“When using rainwater harvesting systems, there is a risk of bacteria getting in the water from things like bird droppings. But the work done in Australia suggests the bacteria live in the top and bottom one foot of the tank.

“The theory is: if you suck water out of the middle, you are never exposing the cattle to risk water.

“I spoke to an Australian cattle vet who was using the method to provide drinking water for his house.”

Subsequently, Mr Rowe has designed and engineered a system to do just that. Hoses are suspended from two buoys that are connected to 18in-long chains to prevent the hoses from floating to the top of the tank.

Because the mains water prevents the water level from dropping below 1m, water can never be retrieved from the bottom of the tank.

The water system also has an anti-freeze mechanism, so if the temp drops below zero, it starts a circulation system.

And a fuse detects if water consumption falls by 20% in 24 hours or increases by the same percentage. A light then flashes to alert Mr Rowe that there could be a leak or a blockage.

Minerals and trace elements are fed into the water supply to improve uptake efficiency – estimates suggest accuracy improves from 75% to 95% when minerals are administered through water, as opposed to a TMR.

Tippable troughs inside each pen make weekly cleaning a quick and simple job.

Three different yolk designs enable cows, bulls and calves to feed at the same trough inside the shed’s six “breeding pens”, which house cows, one stock bull and calves. 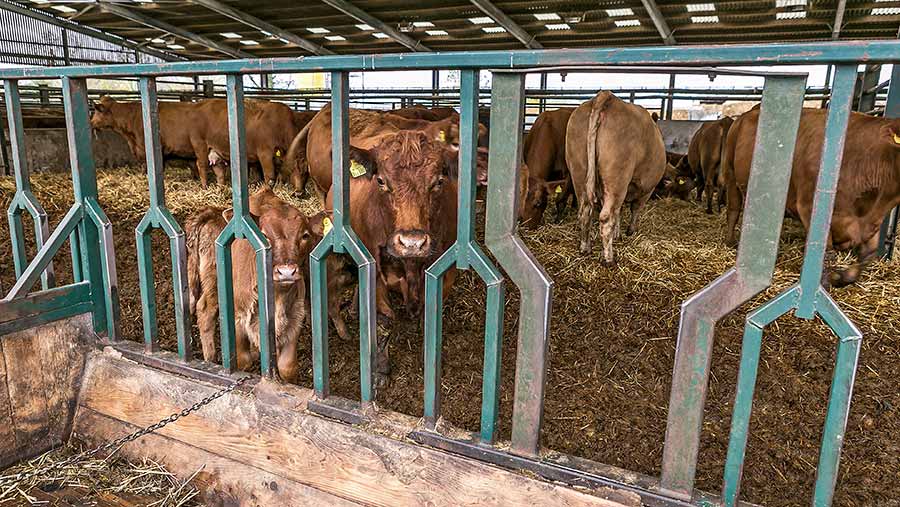 There is a wide opening for bulls, and then a tombstone shape creates a slimmer version for cows and a narrower one again for calves.

It enables calves to feed alongside their dams pre-weaning without escaping and means smaller cows don’t get bullied at the trough. 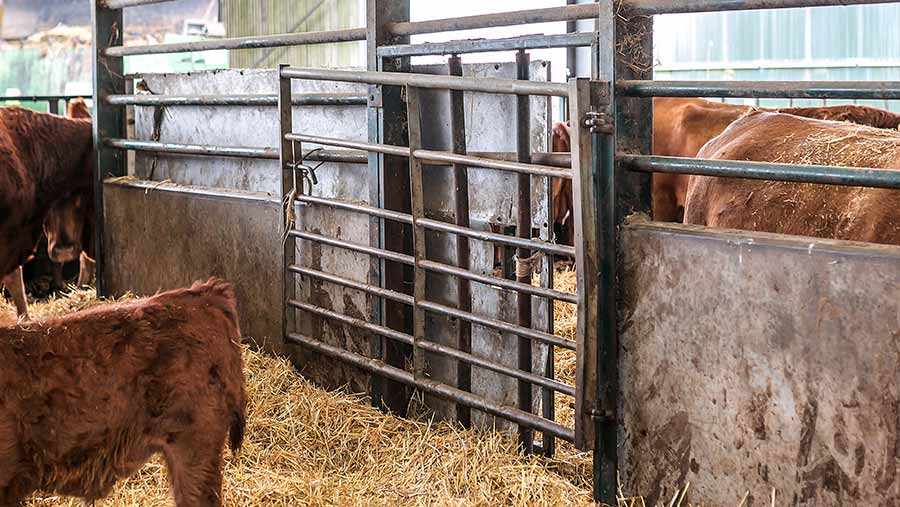 Typically, steers and their dams are housed in July and August, with cows fed straw to aid drying off and calves given access to high-quality TMR through a creep gate.

Calves are weighed pre-weaning to work out their dry matter intake. Once this has been reached – this typically takes seven to nine days – they are fully weaned off their dams.

“We would require them to be eating 0.25% of their liveweight before weaning,” says Mr Rowe, who uses a Keenan Pace system to track daily intakes of groups and says records show steers are now averaging 1.4kg/day post-weaning. 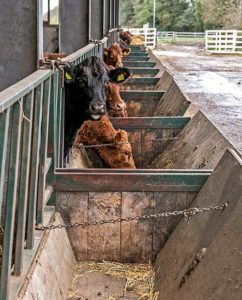 “It is completely stress-free. You get no noise or weight loss because the calves can see their mothers.

“We keep cows in for seven to 10 days after we shut the gate to dry them off. It works really well – we haven’t treated a cow for mastitis in seven years.”

Bull calves are kept on the diet for six weeks before moving to a central Morrisons finishing unit.

Meanwhile, heifers are housed later – about mid-August – and are weaned in separate pens alongside their dams so they can be fed a different grower diet, with lower levels of starch and sugar.

Once they hit 400kg at one year old, they are sold direct for breeding.

Bespoke feed troughs are large enough to hold up to 200kg of TMR each. With two troughs allocated per pen, that equates to 400kg – so feeding using the farm’s Keenan wagon has to be done only once a day.

Six-metre-long chains in the troughs are set according to head length to enable stock to reach the back of the trough so in the afternoon they “feed themselves”. This also reduces feed waste.

What is the best bit of kit that has really enhanced animal performance?

What would be the last thing I would take out? The fans. But it is a combination of lots of little things that add up to a big difference. 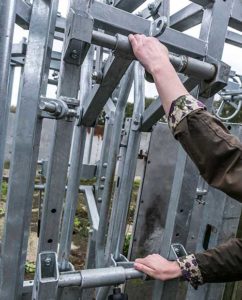 What has been your best buy?

A calf catcher. I can do all the calving on my own.

I never catch a calf for 24 hours to make sure it has bonded but when I do, I can do it safely.

And we have two crushes – one for TB testing and one for weighing.

The TB crush, from Bateman, has double yolks to give you easy access to the neck and to make tag reading easier.

The first time we used it we reduced our TB test by two hours.

I would install the mark-two troughs. Since installation we have moved to galvanised and aluminium instead of wood and improved the design to include an 8in crank, angled on a slope.

And without hesitation I would put a lean-to over the handling system. But everything is evolving and you can’t get it right first time.