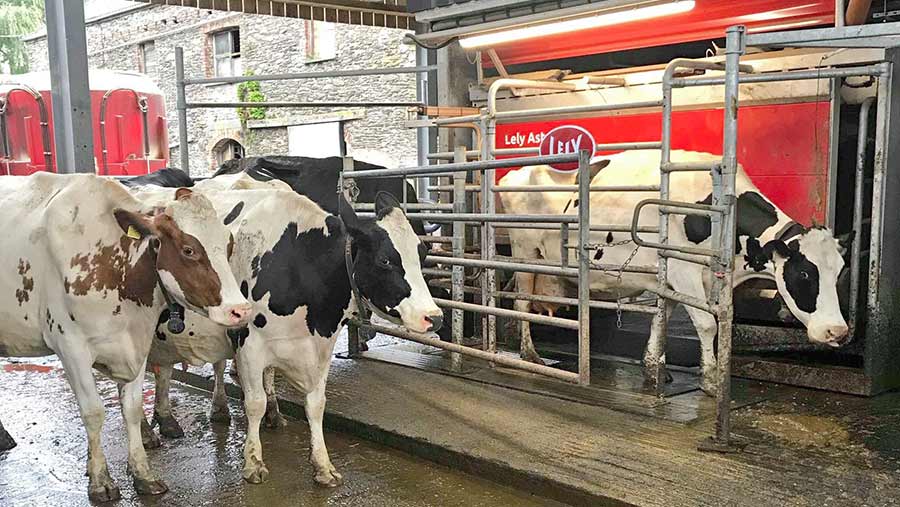 Having the best parlour for your system can pay dividends, in terms of milk yield, quality and your work life.

If you’re thinking about changing your parlour or going into dairy the most important thing is to have a comprehensive plan, says Ian Ohnstad, director at The Dairy Group.

“Consider what your objectives are – rather than immediately focusing on the manufacturer, size and configuration. You also need to consider lifetime cost – which includes running costs – not just initial purchase cost.”

Managing expectations is a significant factor too, in terms of throughput, performance and staffing. “There’s no point expecting to milk 150 cows an hour if the outside work can only be done at 100 cows per hour.”

Below, we take a look at four different parlours and Mr Ohnstad gives us his verdict. 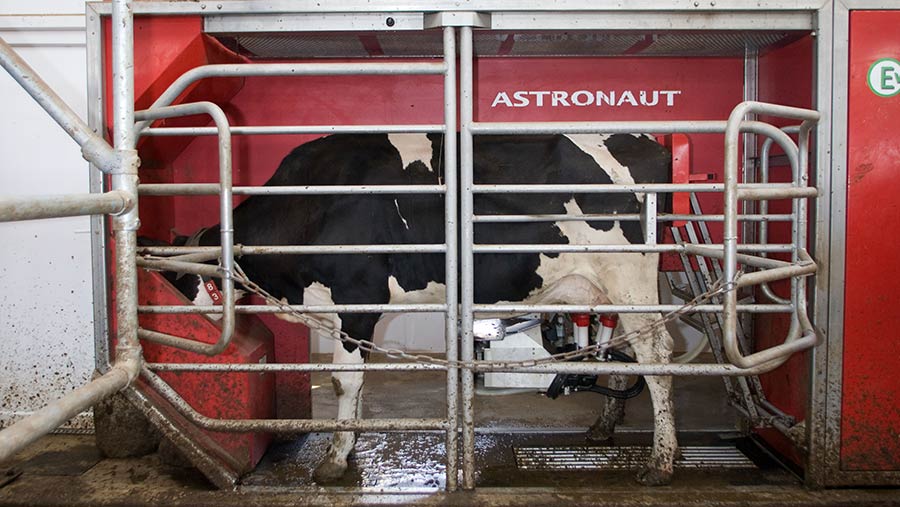 The Kitto family farms near Looe, Cornwall, and put in three Lely robots last year. “It took two years of planning and we started the work at the end of August last year – we were milking in December, which I don’t think is bad going at all,” says Harvey Kitto.

He works with his parents Philip and Janice, milking 170 pedigree Holsteins and calving all year round. “We decided to go for the robots for a better quality of life, and because of all the data they collect we can manage the herd better,” he explains. 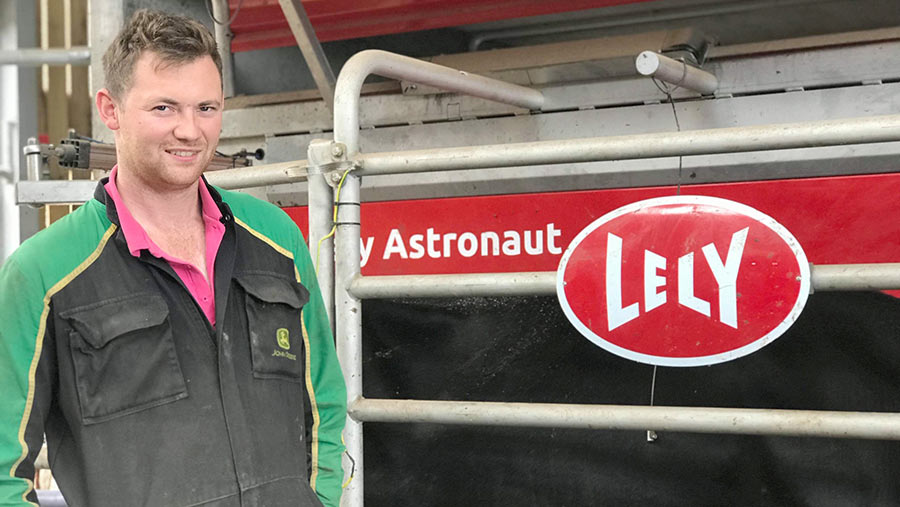 The whole system cost around £400,000. “We thought we would see a return between seven and eight years, but with the lift in yield, it might well be sooner,” says Mr Kitto. “We think the cows are doing better on the robots, they seem to be lasting longer and are happier.

“It’s made work much more flexible. Before, all of us had to be here for milking but now we’ve got our own individual jobs – it’s not less work but it’s more management.”

The greatest amount of work is with the freshly calved cows, he adds. “You have to strip them out and retrain the robot, it does sometimes struggle with a broader udder.”

In terms of maintenance, the robots are serviced three times a year as a part of their package. “All we have to do is change the liners and brushes – around every 10,000 milkings (three months).”

Robots give an opportunity to be more flexible with labour, but whether there’s a genuine capture labour savings is often open for discussion.

Running costs are higher than any other system so it is essential to increase milk output and make use of the extra labour to improve cow management.

Steve and Karen Kendall, at St Ingunger Farm, near Bodmin, put in a rotary parlour six years ago.

“We had a really old herringbone parlour and we were at a crossroads – do we put in a new parlour or get out of milk,” says Mrs Kendall. 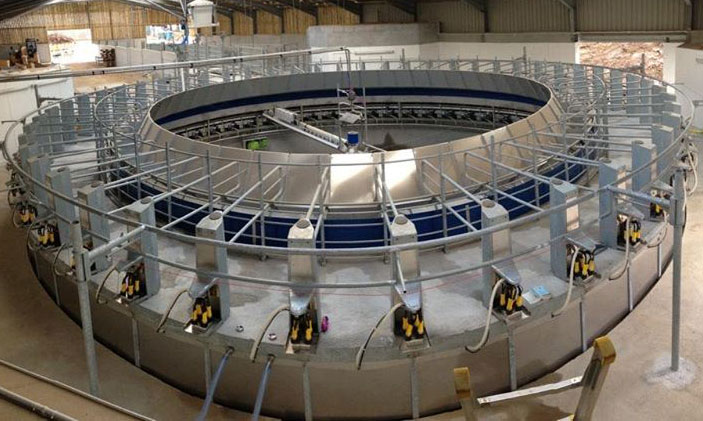 They looked at putting in a new 40/40 herringbone before deciding on a rotary.  They got four different quotes before opting for a 50-point Boumatic system.

“We had to dig out to get a level site – that was a big cost – then construct the shed. We built the parlour, collecting yard, exit, segregation gates and automatic foot bath – we wanted as much automation as possible.”

The cows adapted incredibly quickly and the second milking was quicker than the last milking in the old parlour.

“At that stage we were milking 300, now we’ve moved up in cow numbers to 500 cows to justify the expansion.”

The only downside is not having the same contact with the cows, says Mrs Kendall. 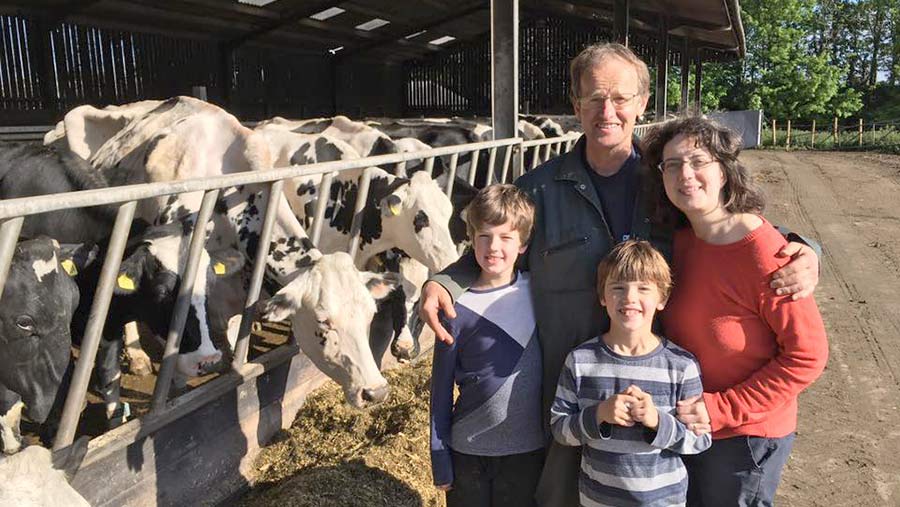 Steve and Karen Kendall and family

The team milk twice a day with three people per milking; one prepping the cows, one putting on the units, and another bringing cows in and scraping the yard.

“We have Automatic Dip and Flush (ADF) with Automatic Cluster Removers (ACR) and a touchscreen which tells us the expected yield, activity and conductivity.

“Generally, it takes around two and a half hours to milk 450 cows, and the wash down with two people takes 45 minutes. It’s about doing the job properly not just getting the cows in and out.”

In terms of maintenance the upkeep isn’t too bad, says Mrs Kendall.

“Changing the pulsators is a really easy job and the farm staff have learnt to do it – they undertake the majority of routine maintenance.”

Initial capital investment is high, and while it can be run with minimal labour, those efficiencies are lost if not staffed accordingly. Running costs are higher because of the moving parts and maintenance.

Costs should be considered in the light of the units of milk produced. Because a rotary parlour is associated with a larger herd, the annual running cost in ppl is generally quite competitive. 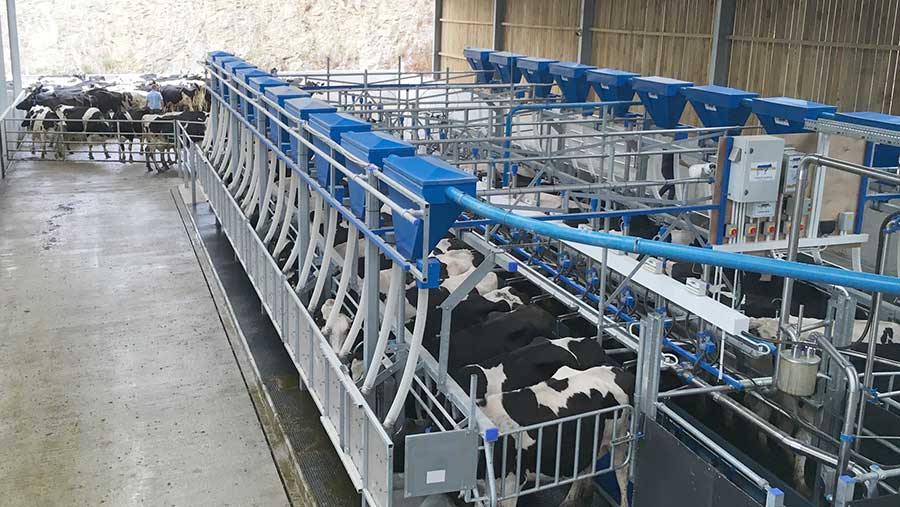 “Before we had an abreast parlour with six units which was approximately 50 years old,” he says. “It was very manual and took over four hours to milk 130 cows twice a day [eight hours in total].”

The process started with digging a new site. “You need a big shed to house it, and the whole project took 18 months because we installed a new feed yard and cubicles at the same time.”

But the benefits were seen instantly.

“Right away the milking sped up – it takes two and a half hours to milk 160 cows. But the main benefit is that it’s a healthier working environment – the cows come in and turn so their back legs are just there and you can put the unit on – it makes it so much easier.”

He feeds both in and out of the parlour to encourage them to load. “It takes under 50 seconds; a rapid exit is 10-15% faster than a herringbone.” 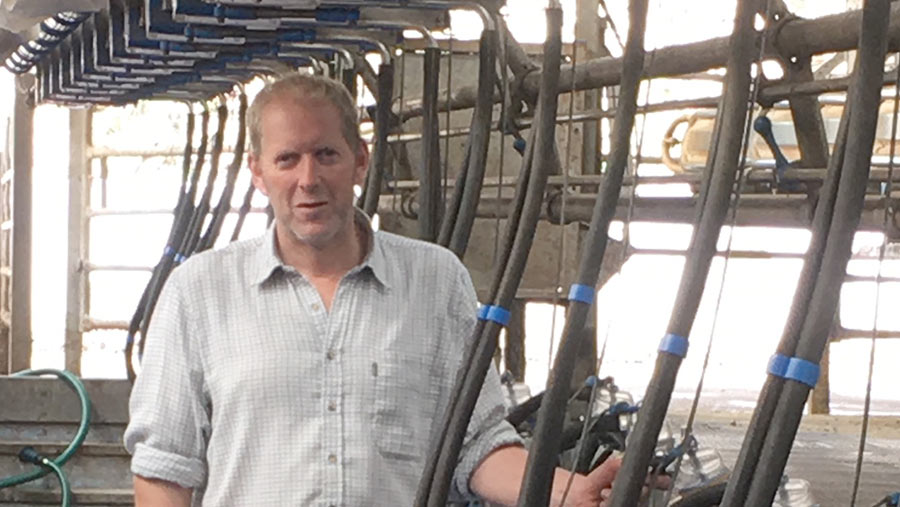 Mr Hambly is also hoping that he will now have more time to focus on improving grazing to increase yield. “At the moment we’re yielding 6,800 litres a cow a year, but we would like to push it up towards 8,000 and make more from forage.”

Although quick to exit, traditional 90-degree rapid exit parlours can be quite slow to load, as the cow enters the parlour and has to turn to 90deg to a gate.

But it is quick to unload because as the milking finishes the barrier in front lifts up or rotates out of the way. To mitigate some of the loading problems, some manufacturers are now producing 60-70deg parlours.

This means as soon as the cow has cleared the front stalling, the stalling can be lowered and loading can commence again.

They have the potential for high throughputs, but while it is possible to feed in a rapid exit parlour it is more complicated because of the mechanism that needs to move.

And because the cow is stood at 90deg, often with stainless cladding or dung shields, you are entirely relying on identification systems unless you can recognise a cow from the knee down.

Running costs are generally greater than with a static parlour because of the moving parts, rams and bearings, so there will generally be more wear and tear.

They milked in a bale for six weeks while the parlour was being installed and by using the existing barn, they didn’t have any additional building costs.

“We went from a 14/14 which was quite labour intensive and slow to a 16/16 direct to line DeLaval parlour. We have had it for six weeks now, and the cows and ourselves have adjusted. It’s much more efficient – milking is easier and faster.” 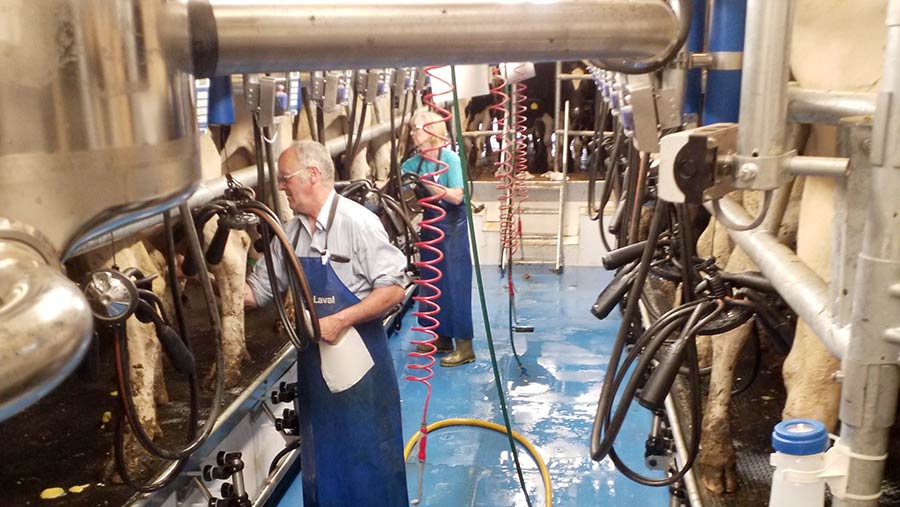 Mr Dymond feels that he’s getting an immediate payback.

“Not just in monetary terms, it’s better for ourselves and the cows. It’s far more efficient, easier to work in and the cows enjoy it. It will probably be five to six years payback financially.

“I think we’re the first parlour in the UK to have the new DeLaval Evanza cluster, which is very lightweight. It’s got a new type of technology in the shell – they say it’s better for the cows and the liners only have to be changed once a year.” 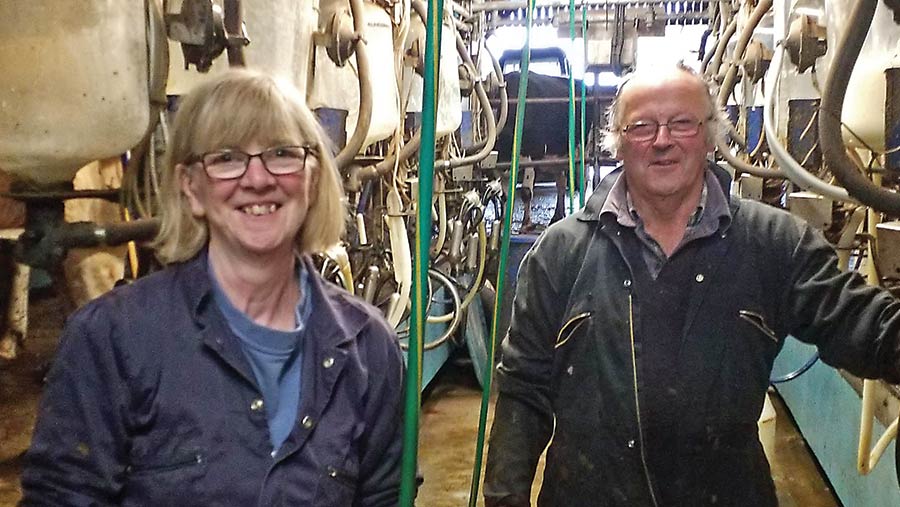 The pulsation in the cluster also varies depending on what stage of milking the cow is at. “They’re milking out easier, the cows are calmer and less fussy,” he adds.

“You can comfortably manage it with one person. And we’ve already noticed the somatic cell counts and bactoscans have gone down.”

There are primarily two configurations of herringbones; the swing over and the doubled up, although the angle of cow standing needs consideration, says Mr Ohnstad.

“If you’re not feeding in a swing over parlour it can be a very cost-effective system. It comes into its own when you can group cows according to yield. If you are year-round calving and have a wide yield variation within a group then performance will be limited by the slowest cow.”

The doubled-up system gives more flexibility for yield variation, and the operator’s pit is generally wider, so can be less claustrophobic.