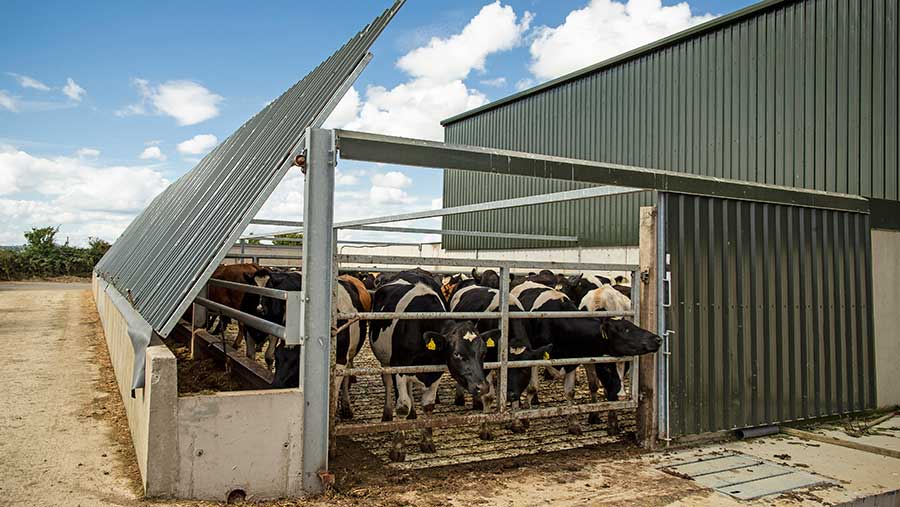 The cost of woodchip was rising and it was a challenge to dispose of the soiled material, so Mr Murphy decided to replace the pad with a roofless, slatted unit.

The cattle performed so well in the unit a second, duplicate was built last year, with each shed holding up to 120 animals. This has meant cattle previously housed in rented sheds could be kept on-farm.

“We have been renting sheds on other farms but our aim is to eventually have everything here on the farm because it would be easier from a management point of view,” Mr Murphy explains.

See also: Business Clinic: How much to rent a cattle finishing building?

The pad was removed and replaced with a 2.7m deep slatted tank enclosed by three 8ft-high walls; a feed passage was already in place and this formed the fourth barrier.

“We struggled to get the pad draining properly in certain weather conditions even though we had constructed it correctly with drains and stone,” explains Mr Murphy, who farms with his wife, Bridget, and their children, Padraic and Sinead.

Each unit is split into three pens to allow different groups of cattle to be kept separately.

One of the most important considerations was to provide shelter for cattle from the wind which the walls and the sheltered position of the unit offer.

The units were built in a sheltered part of the farmyard to avoid cattle huddling together during bouts of bad weather instead of lying down, which would have risked foot problems and other animal health issues. 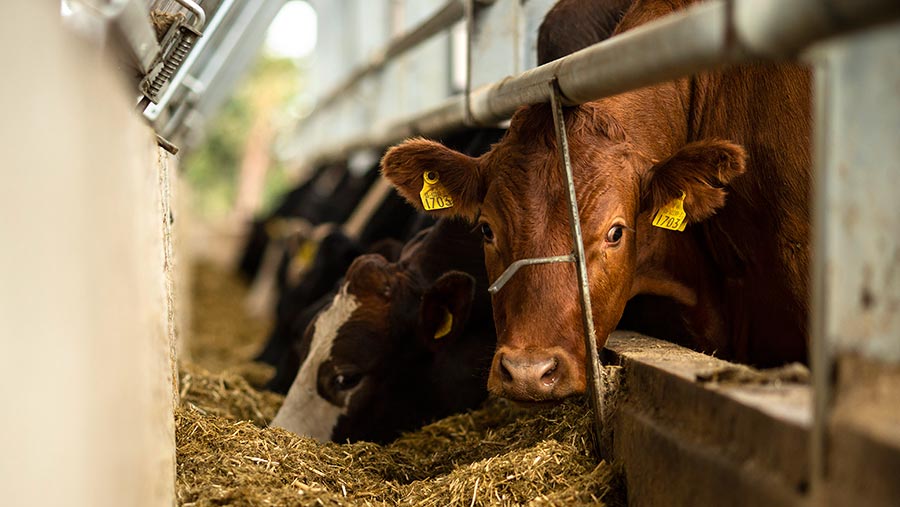 Mr Murphy also insisted on the feed passage being covered as he believes this is integral to the system functioning at its optimum.

“Some farmers don’t cover the feeding area but I think it is important cattle are sheltered when they are eating because it encourages them to eat more,” he says.

The trough is covered with sheets of 10ft-long metal cladding which overhang the troughs.

The dimensions of the unit provide 2.75sq m of accommodation per animal – well within regulations in Ireland which dictate that stocking rates for slatted housing must be no less than 2sq m.

The slats are covered with rubber mats, another feature which Mr Murphy regards as essential.

“Cattle don’t mind what is coming down on top of them once they have comfort beneath them and they are protected from draughts,” says Mr Murphy.

“The cold doesn’t bother them. They will lay closer together when the weather is colder as was the case last spring and their coats also grow thicker in the winter as a reaction to being outdoors.”

Savings are made on the maintenance of gutters and downpipes associated with buildings and there is also a useful reduction in the time spent treating stock for disease.

However, the Murphys had to spend an additional €7,288 (£6,563) per unit on extra slurry storage capacity to accommodate the annual rainfall of 1,000mm.

They need sufficient storage for 16 weeks to comply with nitrate vulnerable zone regulations in Wexford – they have 33,000 gallons of additional capacity per unit to allow for the additional rainfall on an unroofed structure.

Additional rainwater collected from roofless accommodation can increase slurry requirements by more than 20% but Mr Murphy says this additional water has allowed him to make better use of the slurry. 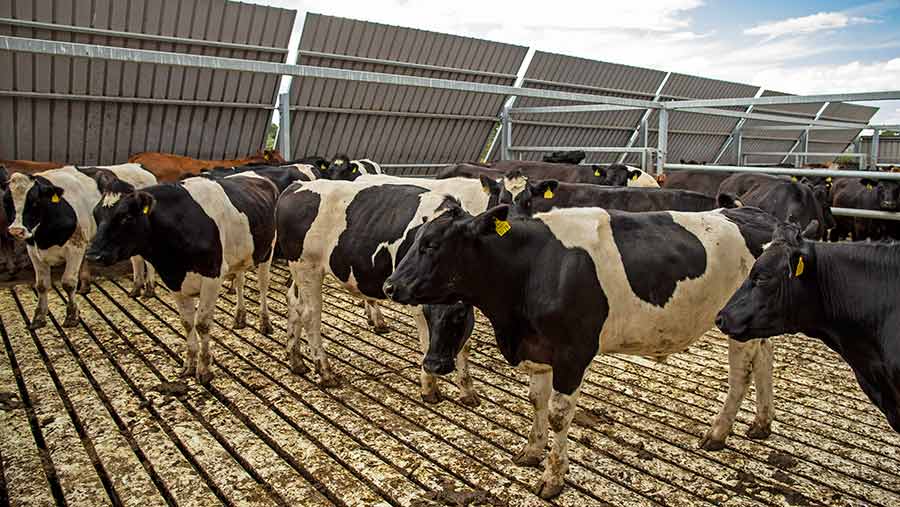 But Mr Murphy admits the cost saving of €8743 (£7,837), when taking into account the additional slurry requirements, wasn’t the reason why he opted for this design – animal health and performance was the ultimate determining factor.

“The first thing I considered was health not cost. We knew of other farmers with this design and they were very happy with how the cattle were performing,” he says.

Mr Murphy buys cattle from different sources. He says one of the biggest health risks of doing this and then housing them in a mixed air space is pneumonia, but the topless building combats this problem, he adds.

“The cattle have fewer coughs and runny noses than those in our enclosed sheds and not only is this good for performance but, because they are less likely to develop respiratory infections or pneumonia, we spend less on treatment costs.”

Performance has been good too. “We have monitored some cattle and have had some very good gains.

“We don’t find that they eat any more outdoors than they would indoors, the cattle get the same ration whether they are outside or inside.

“If the weather is very cold we might increase the feed slightly but that would also be the case for the cattle indoors.”

Although people are exposed to the weather when they are managing the cattle in the units Mr Murphy says this is not an issue. “It is no different to having an outdoor system and it can be more enjoyable to work in an outdoor environment than in an enclosed shed.” 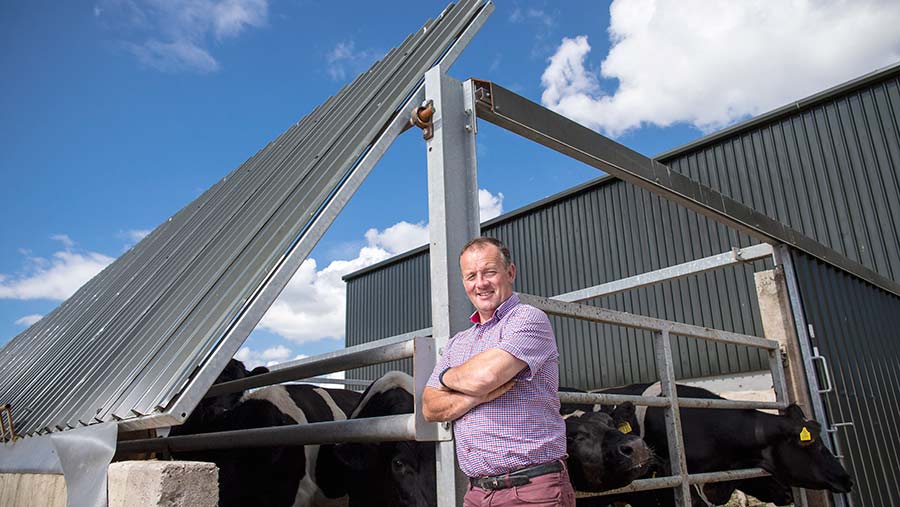 There are an assortment of buildings at Knockbay Livestock but Mr Murphy believes the unroofed sheds outstrip the rest.

Other housing on the farm includes three covered slatted sheds, one of which was built in the 1970s and has a low roof which results in poor ventilation.

Mr Murphy says he plans to gradually replace each of these with unroofed accommodation.

“They suit our system and, with cattle healthier and performing well, they are the way forward for us.”