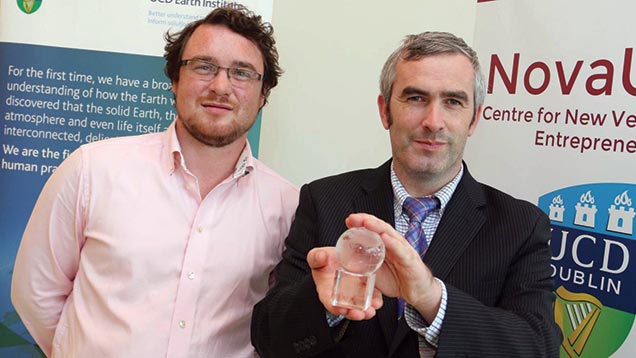 An award-winning wireless sensor system to monitor environmental conditions in broiler sheds has been developed by researchers at University College Dublin to help find optimum conditions for bird growth.

“It is able to relate the environment, the amount of feed taken, water intake and so on, to the performance of the crop on a daily and weekly basis,” principal investigator Prof Shame Ward told Poultry World. “It is a management tool, used to enhance performance of the crop, but also a warning system should something go catastrophically wrong.”

The research by the School of Biosystems Engineering won the top prize at UCD’s Agri-Food Sprint Programme in September. The work has been funded by Science Foundation Ireland (SFI) and Manor Farm – Ireland’s largest poultry producer and processor.

See also: Precision farming is the way forward for chickens

In the past, monitoring has used sensors several feet above the birds. The prototype Bosca (meaning “box” in gaelic) units developed in collaboration with Shimmer Technology, include a larger box which receives data from several smaller satellite boxes around the shed. It then sends this real-time data to a cloud repository via 3G technology.

Any deviations between the recorded data and acceptable environmental limits can be quickly detected. The poultry producer is informed by smartphone, computer or text message and can take the necessary remedial actions.

Sensors have been in place at Manor Farm, Ireland’s top poultrymeat producer, for over a year and 12 crops of birds have been monitored.

“That is sufficient to give the base level in terms of relationships between data on input and outputs of the system,” said Prof Ward. “Manor can know from these data cause and effect. It is passive at the moment in that we are not advocating that the farmer should take remedial action based on the data.”

As well as recording environmental conditions, the researchers are also working on what they call ChirpMetrics – another SFI-Manor Farm funded project – which as its name suggests, will use sound to detect any problems with the birds.

“Just by listening to the chickens you can actually infer certain features of certain conditions. A good farmer or grower will listen before they go into the shed and they have a fair idea if there is something wrong. We are just taking this to another stage,” said Prof Ward.

Likewise researchers are developing BirdEYE, a visual and infrared movement monitoring system. Once the entire system is completed it will be made more widely available.

“Our collaboration at the moment is exclusively with Manor Farm,” said Prof Ward. “Once we hone it there is a worldwide application for this.”

UCD’s Centre for Data Analytics, Insight, is currently testing the Bosca system for accuracy and to ensure that maximum information is being extracted from the data. It will be extended to more than 300 Manor Farm sheds over the next two to three years.

The system has wide potential for use – by producers as described here, but also wholesalers to monitor production quality, or regulatory authorities for welfare monitoring.

Bosca will have a commercial pathway through Nova UCD, which helps academics to interact with industry.