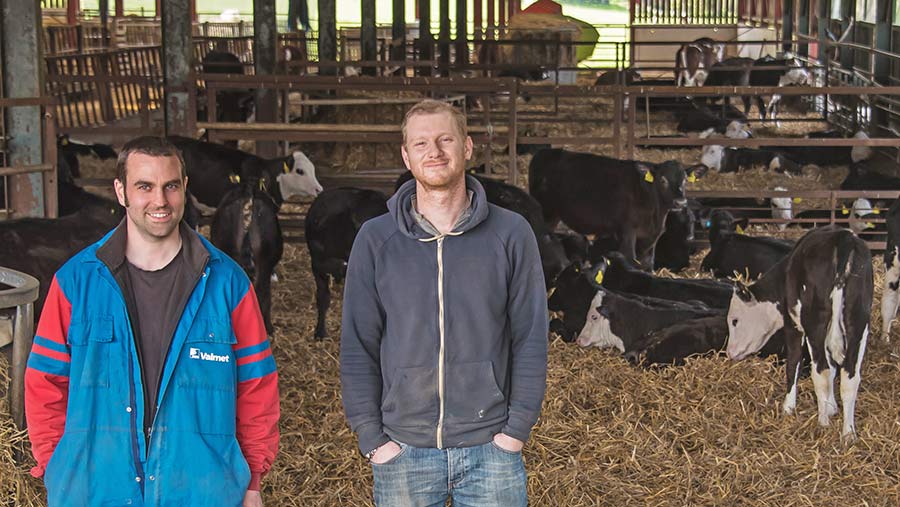 Cousins Dominic and Stephen Isgar farm in partnership with their fathers at Dengrove Farm – a mixed arable/cattle unit near Shaftesbury, Dorset.

The farm rears more than 800 calves a year which are marketed and sold privately.

Breeds used are mainly Aberdeen Angus, Hereford or British Blue steers and bought-in by a specialist buyer at one to three weeks old in batches of 10-12.

Despite already being a high-welfare unit, achieving strong results, the farm has looked to improve through a process of continual fine-tuning and management tweaks.

To do this they use their vet, nutrition advice and attend knowledge-sharing events to glean tips that they can introduce.

Dom attended one of the farm-based workshops in November 2018.

“Since the workshop I’ve changed the milk powder, invested in calf jackets, switched disinfectants and tackled housing ventilation,” he says.

Together, the improvements have helped raise average weaning weights by 15% from 75kg to about 86kg. Weaning takes place over 10 days with milk stepped down from 2.5l/calf/day to 1.25l/calf/day.

The weaning date is flexible and takes place once calves are eating 2kg of concentrate a day, usually at two months old.The improvements mean calves develop faster and weaning has been brought forward by 11 days.

Improved growth is maintained with a 16-day reduction in time to reach the 125kg sale weight at about four months. 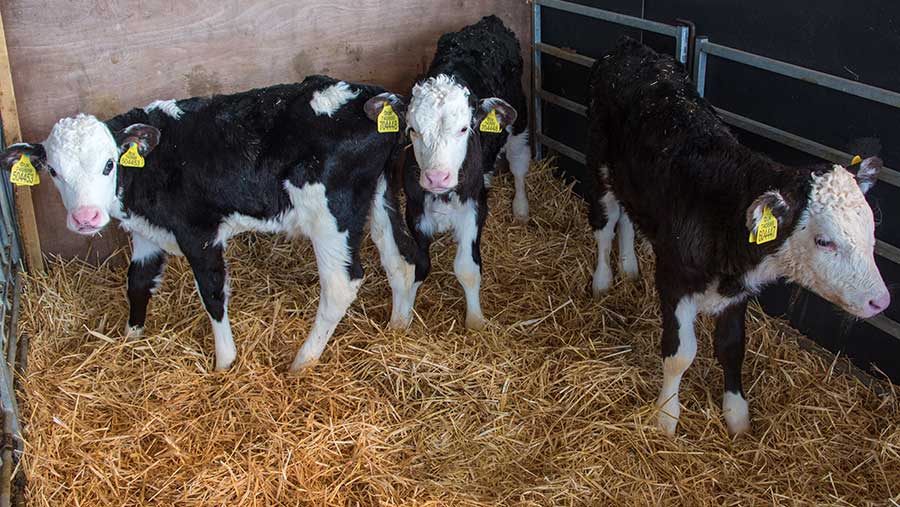 Ahead of the calves’ arrival, Stephen and Dom already had a rigorous cleaning and disinfection procedure.

All metalwork is dismantled and removed from the young calf housing and thoroughly steam cleaned, pressure-washed and disinfected.

But a workshop tip was to be more selective when choosing disinfectants.

“After discussions with the vet we added the disinfectant Kenocox to the cleaning regime,” says Dom.

The product has an increased action on surfaces against endoparasites such as Cryptosporidium parcum, coccidiosis and bacterial infections which are all persistent, major threats to calf performance.

Once the metalwork is back in place it is given a second application of Kenocox which is applied using a knapsack sprayer.The cousins also tackled the surfaces and drainage in the housing.

“Floor surfaces have been improved with a slightly steeper gradient to increase the run-off,” explains Stephen.

Since the changes, flooring and bedding are drier and air moisture levels have been cut.

This reduces the disease challenge from bugs harboured by wet bedding and in the moist air. And, because bedding stays drier, straw use has been reduced by 1 – 1.5 D1000 bales each week.

Previously young calves were kept in individual pens but a switch to group pens has been introduced to reduce stress.

“We opted for pens of three with boards erected to prevent any spread of disease between pens,” he explains.

Calves have taken to the system well and are quiet and calm. There has also been less duplication of tasks with fewer structures and metalwork to clean and disinfect.

On arrival the calves are checked over, weighed and given Rehydion – an electrolyte gel added to the milk. Adding the electrolyte to the milk in a gel form means there is less of a growth check compared to offering calves a water-mixed electrolyte solution.

The milk powder offered is one major improvement area.

“Although the farm didn’t have a problem with scouring animals some were looser than we wanted, with some obvious dirty back ends,” says Stephen.

“We focused on the milk because it was the major feed source and it revealed a high content of wheat flour and ash making it harder to digest.”

The cousins reviewed nine types of milk powder with a nutritionist and opted for one with a lower inclusion rate of straight wheat flour.

Instead it contains hydrolysed wheat gluten which helps to improve digestibility. It also boasts a much higher inclusion rate of vitamin E at 500ug compared to 100ug in the previous brand.

The aim of the higher vitamin E was to boost the calves’ natural immunity, helping them to better resist disease. The cost of the switch compared to the benefit gained was negligible.

“The improved powder is £1,535 so for just £35/t extra we have solved the issues we had and seen growth rates improve,” says Stephen.

Once weaned, the animals continue their development on a tailored blend of home-grown barley, soya, rapemeal and molasses which is mixed on the farm.

Calves are offered the mix in small amounts from arrival with a gradual increase up to weaning.

Another simple piece of advice gained at the Rethinking Cattle Performance workshop was to use calf jackets.

Any young calf is vulnerable to being chilled in the early days of its life. That adds to stress, lowers its immune system and means it is using energy to maintain its body temperature rather than to grow.

Dom bought 60 second-hand jackets for £3 each at a dispersal sale.

“The benefits since then have made them an extremely good investment, with fewer infections, growth checks and about 100g less milk powder used per calf per day when outside temperatures drop to 0c. 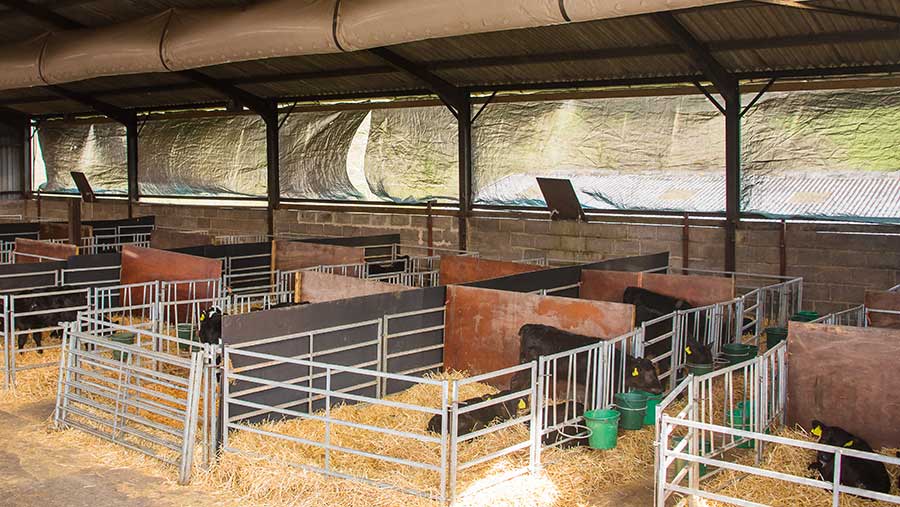 “At the workshop I watched the smoke machine demonstration which prompted me to consider the calves’ environment,” Dom says.

“Since then we have made changes to the shed to keep the calves warmer, while retaining air movement,” he says.

Previously the building sides were open and the air sock ventilation system ran at top speed.

However, while this provided good airflow, the temperature was too low and calves were exposed to draughts.

To solve the issue, five-foot high block walls were built with ventilated metal sheeting added above this to allow air in without creating draughts at calf height.

“Since the workshop we monitor the airflow and temperatures more closely and adjust the fanspeed to the conditions,” Stephen notes.

Once the calves leave the pens they are moved into a large barn.This barn has also been upgraded with new ventilation panels added at the sides to improve airflow and restrict draughts.

Air moisture has been cut and, along with it, the amount of antibiotic treatment needed to treat diseases has also been reduced by about 8%, Dom believes.

“Together, all of the tweaks we have introduced have added up to a significant improvement. “We are pleased with the progress we are making but, we won’t stop here – we will look to continually research and review and keep on improving,” says Dom.

Thanks to Zoetis, Volac and XL Vets, whose sponsorship made it possible for us to run the Rethinking Cattle Performance workshop. Farmers Weekly had full editorial control of this report.