Young farmer Chris Dickinson had always wanted to come home and farm after spending several years working in the farming industry – most recently at the NFU.

But with uncertainty surrounding agricultural payments and variable markets, he knew he had to do something that could stand on its own and add value to the business.

Goats have always been a feature on his family farm, near Hutton End, Penrith, Cumbria – his mum bought her first herd of pedigree Golden Guernsey goats 20 years ago for showing – but they have now become an integral part of the mixed enterprise at North Netherscale Farm.

He is now finishing 200 specialist goats each year.

Establishing the herd and choosing a breed 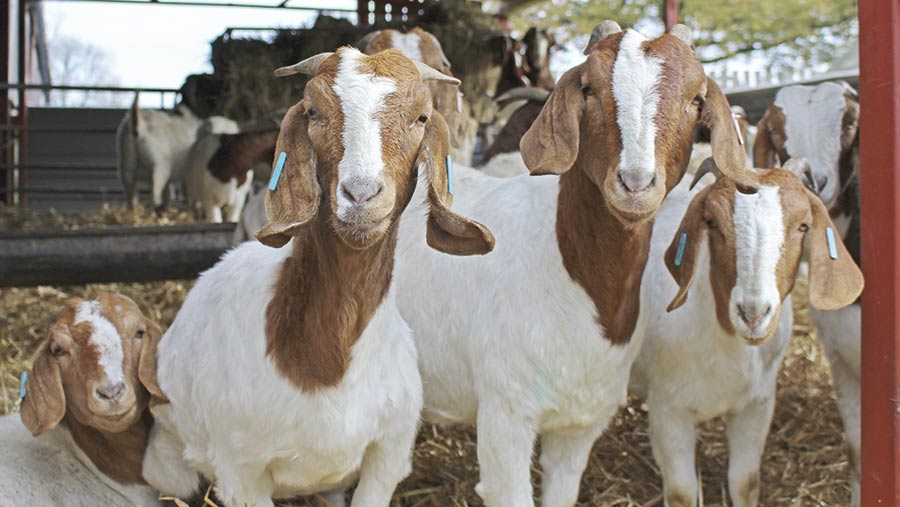 When researching business ideas, Mr Dickinson was interested to read that globally goatmeat was the most consumed red meat and was increasing in popularity in the UK.

But he knew if he was to do it he had to make his business stand out. That’s why he decided to rear specialised goatmeat animals from the Boer breed. And this is where his business name, the Tailored Goat Company, came from.

Mr Dickinson describes the Boer breed as the “Beltex of the goat world”. Originally from South Africa, the breed is designed to get up to weights of 50kg quite quickly and have been bred specifically for healthy, low cholesterol, lean-meat production.

Compared with dairy-bred goats, the Boer breed can reach slaughter weights faster and from less feed.

As luck would have it, a herd of 150 Boer goats came up for sale in Bury St Edmonds in 2016, which he decided to snap up.

Mr Dickinson says: “It is rare for a herd of that size to come up, but the lady I bought from was moving back to South Africa.”

They were a high health status closed herd, which is important with goats as they can be susceptible to disease.

Adapting sheds for the goats 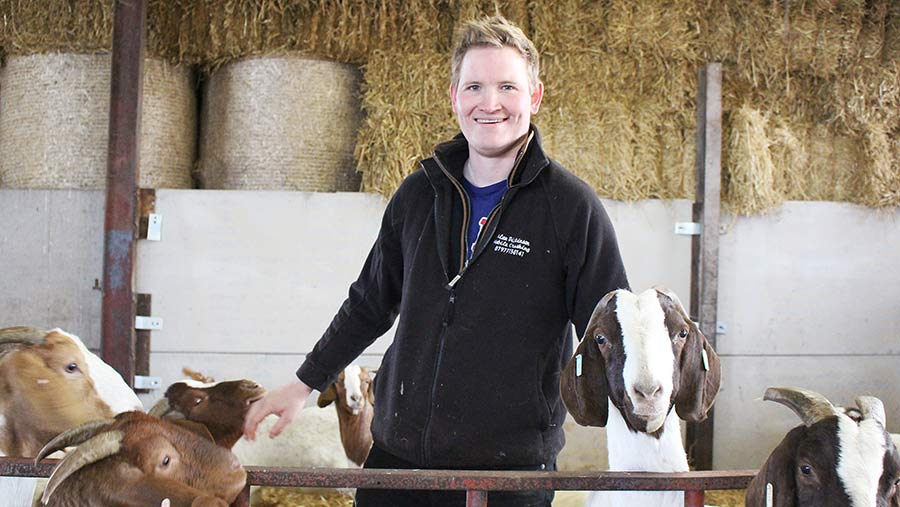 A lot of the infrastructure was already on the farm to house the goats, but a scholarship from the Henry Plumb Foundation for £3,000 helped him adapt some of the housing and equipment.

“Goats like to stretch, so we had to make the gates taller and position the hayracks higher. We also had to install electric fences in front of the normal fences outside as they have a tendency to get stuck. They are not the same as sheep,” he says.

Through the scholarship Mr Dickinson also had access to a mentor, which was fellow Cumbrian farmer John Geldard.

Mr Geldard has been successful in diversifying his business, setting up a farm shop and building a brand. He was able to advise Mr Dickinson in this area.

Specific fields were also set-aside to rear the goats in through the spring and summer.

“We don’t mix graze sheep and goats due to health issues. We have had some issues with Haemonchus [a parasitic worm] in the past. Now we do periodic worm counts every month and work with a local vet and honorary secretary of the British Goat Veterinary Society, Ben Duston, on our annual health plan.”

Mr Dickinson is kidding 120 goats and is finishing in excess of 200 goats a year. The does (females) are bred using natural service in the autumn – with five billy goats used on the farm.

Like sheep, they are seasonal breeders. In order to bring the does into season a cotton rag, which is covered in urine from the billy goats, is added into the pens with the females a week before mating.

Mr Dickinson explains: “Before mating it is normal for the males to wee on themselves and rub their face in their urine prior to mating, this is why we add the rag in with the females as it helps get them cycling.”

Males are in with the females for one month and removed for a few weeks before being added back in for another month. This picks up any females not in-kid.

“We use natural service as AI is expensive. We also don’t find it a problem sourcing good billy goats,” he adds.

Females are pregnant for five months with most kidding in December and January.

Kids are with the does for about four months and often naturally wean themselves. During this time, they are on milk with an 18% protein nut, hay and straw also offered ad-lib.

They are then split into same sex groups at weaning. Mr Dickinson has tried castrating the males so they can be housed as one group, but found they grow quicker entire.

“As long as they are finished in under a year it is fine. Entire males over a year old can cause the meat to be tainted,” he says.

A handful of the best females are retained every year for replacements. Any males that are particularly good breed examples are also retained and sold as stud animals.

In order to be able to supply goatmeat year-round, Mr Dickinson also sources about 100 Boer goats a year from a local farmer to finish.

Carcasses are sold whole through local butchers and eateries in Cumbria.

He was supplying London including Selfridges but as his local reputation has grown enough he is able to fulfil his business needs from local custom and this helps keep haulage costs low.

He also has some farmgate business, so a small number of animals are slaughtered and vacuum packed for the freezer at home. “It’s repeat business that we are getting,” he says.

By being in control of his business, Mr Dickinson says he is able to be a “price maker not a price taker”.

“I’m able to sell goatmeat for the double the price of lamb. I am lucky as it has sold so easily with minimal marketing,” he adds.

Ideally, Mr Dickinson would like to grow the business; however, the limiting factor is the ability to get hold of good breeding stock.

Mr Dickinson runs the goats alongside another job he has working with a subsidiary company of Wot a Pullet called Wot a Hen helping to establish free-range egg businesses.