Dog attacks on sheep show no sign of abating – with a rising tide of farmers using social media to highlight the devastation it causes.

Although farmers are sometimes legally entitled to shoot dogs endangering sheep, doing so can also result in legal action against the person pulling the trigger.

Instead, more farmers are shooting photos rather than dogs – publishing the pictures on Facebook and in the wider media.

Our gallery of sheep worrying incidents may be gruesome, but the farmers behind the photos believe these pictures deserve a wider audience as a way of encouraging responsible behaviour by dog owners who are often oblivious to the dangers their pets pose.

Many people don’t realise sheep worrying is a crime. Yet more farmers are reporting incidents, says the National Sheep Association (NSA), which has been researching sheep worrying incidents to establish a more accurate and up-to-date picture of the problem.

“Sheep worrying by dogs continues to be a real concern for sheep farmers across the UK,” says NSA chief executive Phil Stocker.

“Recent media coverage of the problem may have raised awareness, but this has not necessarily translated into a reduction in cases of dog attacks.”

Some 46% of farmers were anxious about spending time away from home and 24% had even considered giving up keeping sheep.

The findings will be invaluable in the fight to keep the subject fresh in the minds of the general public, according to Mr Stocker.

Farmer Peter Sandgrove speaks of his heartache in a Facebook video after two dogs kill 10 sheep at Nightingale Farm, Polegate – near a popular trail for walkers.

A further five sheep are so badly injured they had to be put down. “I was crying as I had to shoot them,” says Mr Sandgrove. 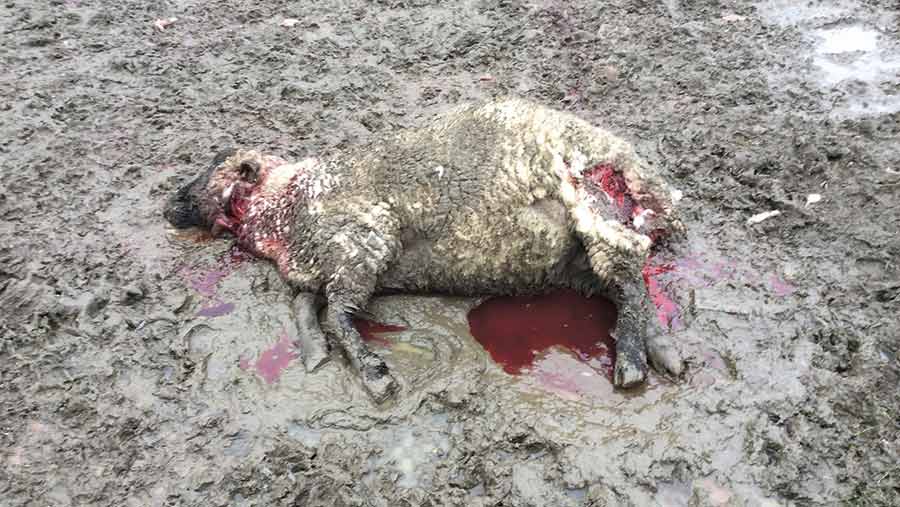 Dogs rampage through the village of Burton Overy, leaving five sheep dead and two fatally injured. Rose and Keith Holman find the grisly remains strewn across four different fields and floating in ditches – and photos are published by local media.

A dog attack leaves 30 lambs killed or seriously injured on a family farm near Ammanford.

Eirlys Williams posts photos of the devastation on Facebook, where the pictures are shared more than 10,000 times, with more than 1,750 comments from viewers. 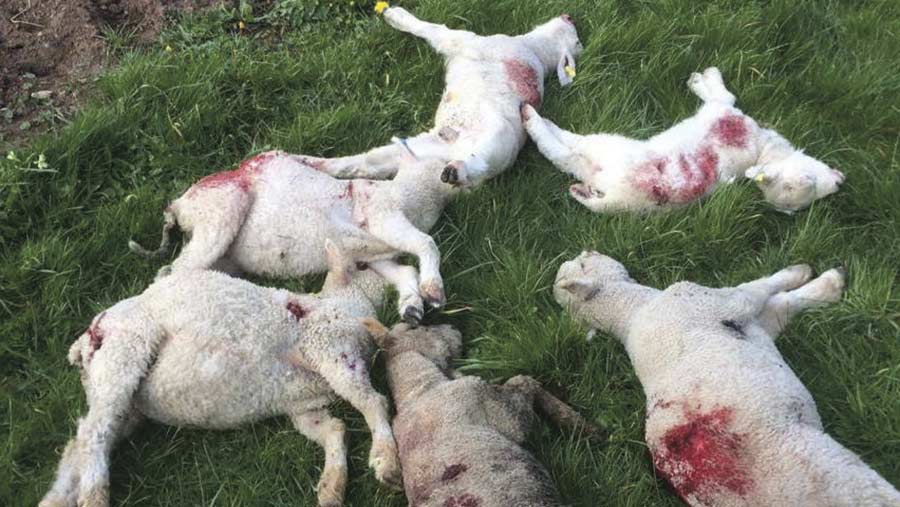 Almost 20 sheep are left dead during two harrowing attacks on farms in the Mendips. Four sheep are killed and a further five mauled in a field between Street and Glastonbury.

Vet Gethin Edwards posts pictures on Twitter of a horrific dog attack on sheep at Wood Farm, Wirswall, near Whitchurch. Eleven animals are put down after the attack leaves lambs running around the field with intestines hanging from gaping wounds.

Eleven animals are put down after the attack leaves lambs running around the field with intestines hanging from gaping wounds. 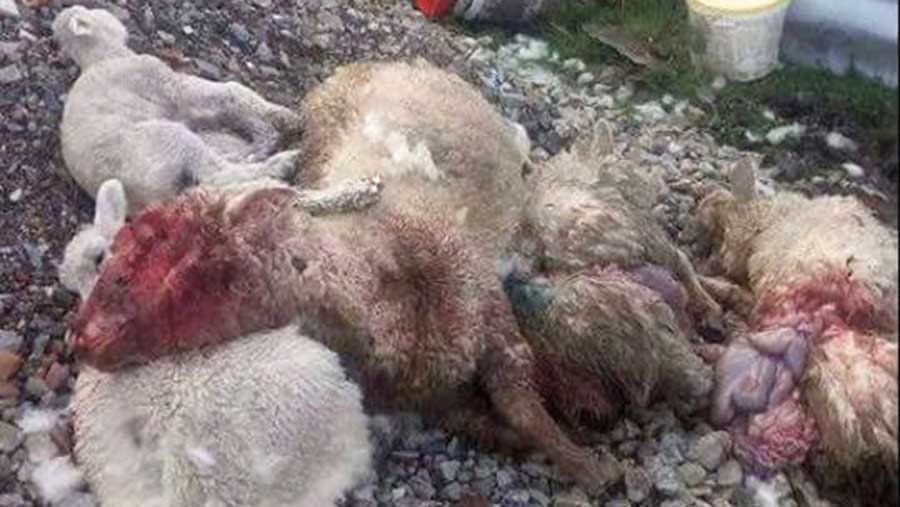 A dog attacks sheep, lambs and geese near Burnley. Three sheep survive the attack – but

Three sheep survive the attack – but two sustain injuries so severe they are put down.

The dog owner decides to walk away leaving the carnage and animals writhing in pain. 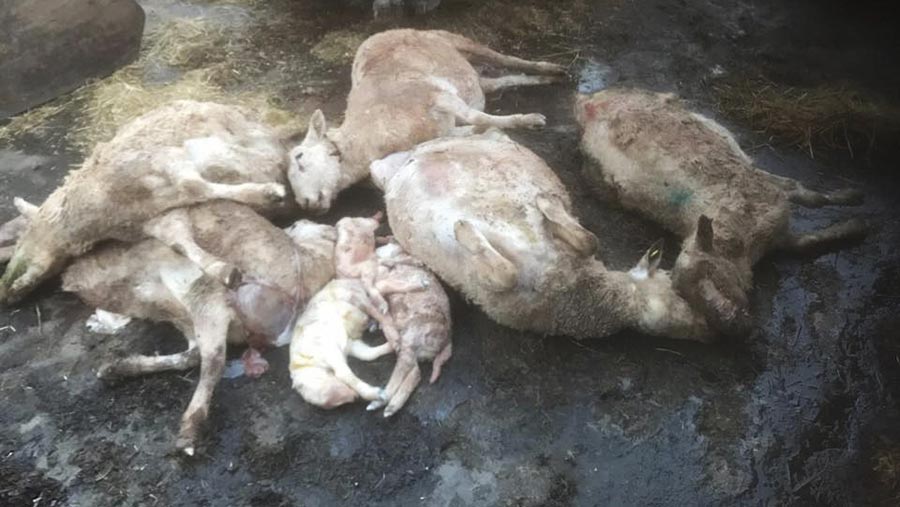 Six pregnant ewes are left dead after being attacked by a dog which runs loose at Hartpury College farm.

Farm manager Andrew Eastabrook says each ewe was carrying two lambs which also died following the attack – at a total cost of some £1,500.

Dog owners fail to report the incident – the sixth in less than two weeks – choosing to walk by doing nothing.

A vicious dog attack on a flock of sheep kills three ewes at Telscombe.

It is the third reported attack this year – despite grazing sheep being vital for the maintenance of the chalk grasslands of the South Downs enjoyed by dog walkers.

Farmer David Bell receives death threats after shooting a dog that attacked sheep on the Balcarres Estate, near Colinsburgh, Fife.

The messages are sent to Mr Bell via Facebook after he shoots a Siberian husky, prompting a police investigation into the incident.

‘Shoot dogs only as last resort’

Farmers should only shoot dogs as a last resort, says the National Sheep Association – because the legality of doing so depends on whether there is a lawful excuse for shooting the dog in that individual circumstance.

Often a decision on whether to shoot has to be made in a split second before livestock are killed or mutilated. If it is deemed necessary, the NSA says farmers should remember dogs are counted as property so shooting could result in a criminal damage charge.

In order for a shooting to be legal, a farmer must be able to show they acted in the belief their sheep were in immediate danger and that their actions were reasonable under the circumstances.

What counts as “reasonable” can differ in individual cases, depending on the situation.

If, for example, a farmer has had problems with a particular dog before and the owner has ignored requests to keep it under control, this would be a relevant factor.

It is important to remember a farmer is not entitled to shoot a dog if it has already left the vicinity and is no longer a direct danger to sheep – even if the farmer fears it might come back and pose a threat in the future.

There is also the possibility of the dog’s owner suing a farmer for trespass.

The Animals Act 1971 offers the defence that the farmer was protecting livestock if it can be shown that you reasonably believed that either the dog was worrying or about to worry the livestock.

However, it must also be shown there were no other reasonable means of ending or preventing worrying; or that the dog had been worrying livestock, had not left the vicinity and was not under the control of any person, and there were no practical means of finding out who owned it.

A farmer must report any shooting to the police within 48 hours. If it is not reported within this time frame, none of these defences will be valid in civil proceedings.