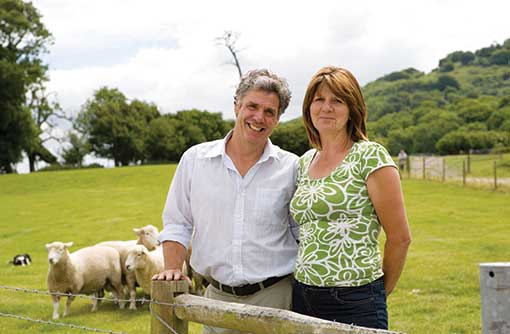 Genomics may be a term more familiar in the dairy sector with genomic estimated breeding values (GEBVs) being available since April last year. But how valuable is it to the sheep sector and is it really possible? This was one of the questions asked at last week’s Sheep Breeders’ Round Table during an industry discussion.

Genomic technology enables an animal’s genetic potential to be predicted from a young age by comparing its DNA with a “SNP key” which is produced using a bank of genetic information representative of the national population. This allows ram lambs to be used with more confidence, rather than waiting for progeny testing.

However, while some experts believe there’s plenty of benefits to be had from heading down the genomic route, others believe it just isn’t possible and cost effective.

In favour of genomics being cost effective

Mike Coffey from Scotland’s Rural College (SRUC) said the sheep industry has to adapt to adopt genomic selection. “The longer we don’t have genomic selection the further ahead New Zealand gets. We are already seeing some companies using the technology such as Innovis, Easy Rams and SIG. However, we can’t afford to have it with the current industry structure,” he added.

Genomics can be used for improvement of traits that are too difficult to improve via other means, explained Prof Coffey. “However, it is a step change and will cost millions, but if we are to gain we have to fully embrace.”

Prof Coffey admitted genomics wasn’t vital for genetic improvement, but stressed it’s importance in speeding it up. He believed it could only work if the industry started performance recording and doing it well.

“If we want to exploit technology then we’ve got change the way we do things. In the beef industry we have a system whereby slaughter information such as carcass length is sent back to the breeder. The Limouisn breed for example, will be implementing genomic selection for visual image analysis (VIA) traits which are high-value traits from next year. That means the abattoir and supermarket would be getting a product that meets their specification and the farmer would be getting his premium, too. If the sheep industry want to create that added value then the technology is there.”

It’s the phenotypic data the industry would be interested in such as individual animal feed intake. However, Prof Coffey suggested one way to get this data would be to set up a nucleus of farms to collect data on behalf of the industry, which he admitted would be expensive.

Sheep farmer Rob Hodgkins (pictured above) who breeds Wairere Romney’s and uses genomics said it was the quickest way to increase genetic potential. “Genomics has given use more confidence in using unproven stock. We use it as a yardstick to measure ourselves against New Zealand stock and also gives us access to difficult to measure traits such as wool and meat yield.”

Arguing against the value of genomics

However, Geoff Pollott of the Royal Veterinary College London said while it was possible in the dairy industry due to there being just one main breed, he didn’t know how possible it would to produce genomics EBVS for the 90 breeds of sheep in the UK.

Will Haresign from Aberystwyth University also said he believed the UK industry would struggle due to the lack of data recording.

“Only 10% of the terminal sire sector records and in hill breeds it is a lot less. For genomic selection to work we need to be able to associate 50 SNP data with phenotypic data of animal and without a wide range of recording we are not going to be able to get accurate genomics. Unless we get real with performance recording then genomic selection has little to offer the UK sheep industry,” he stressed.

Prof Haresign added: “In the past decade we’ve gone back in terms of the linkages we have in the UK with the hill breeds and long-wool crossing breeds having very little if not zero recording and terminal sires having little recording too. We have to ask ourselves a question, do we want to be premier league when it comes to breeding or a completely non-league side. Currently we are a non-league side,” he said.

Read more about the use of genomics in the dairy sector