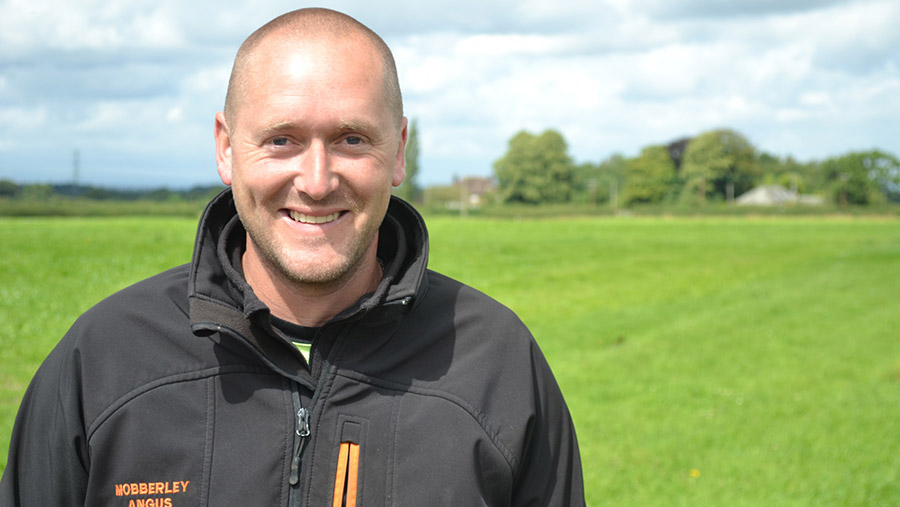 A series of changes is proving transformational on one Cheshire farm where making data-based decisions is key.

When you’re making lots of changes, it’s vital to question everything you do.

That’s the view of Ian Norbury who, after a spell working in construction, is now running the family farm near Knutsford in Cheshire.

His plan for Dairy Farm centres around expanding the Angus herd, developing pedigree stock sales, achieving better carcasses quicker and driving down costs, while making the system easier for one person to operate.

Ian’s parents, Geoff and Pauline, had originally been dairy producers, later shifting to beef and keeping 60 cows when Ian returned to the 100ha (250 acre) outfit close to Manchester airport five years ago.

“I’m aiming to build the herd up to about 150-head,” explains Ian. “I’ll then cull the lowest performing cows so I end up with a slightly smaller ‘super group’ of cows that perform really well but require low management.”

He calved 112 cows this year compared with 70 last year, reduced the calving period from 21 to 15 weeks and now aims to finish animals for slaughter between 16 and 21 months, after one winter inside.

“I usually aim for the July and August market, which is usually when trade peaks, but this year prices were well down in this period compared with where they usually are.

“When I came back to the farm, we had a lot of big Simmental-cross cows, some of which were over a tonne, so I’m reducing the average cow weight to 600-700kg. That’ll mean I can carry more, because they’ll eat less and I’ll be able to out-winter them.

“I’m going to stick with Angus, because they’re low cost to run, simple to manage and easy-calving.”

Small gains to transform the farm

Ian’s approach to the business is conditioned by the fact he’s now got a family and, having spent time in the building trade, is conscious he could earn a reasonable wage off-farm.

“I love farming and am passionate about it, but the farm has to pay its way,” he says.

“There’s no one silver bullet – it’s about making lots of small gains that collectively transform the farm.”

To do this, it’s crucial to have accurate data on which to base decisions, he stresses. “By nature, I’m an analytical person, but I want to be able to justify every decision I make.

“I try to break as many costs as possible down to a per-day figure, because I know roughly how much I earn per day so that helps put them in to perspective!

“When beef prices are low and there’s only ever a small margin to be made, some people say there’s no point in being so obsessive about the figures. But I see it the other way round – at times like now, there’s more reason than ever to make those incremental improvements.”

With the beef market under pressure – partly, he suggests, because of the publicity surrounding veganism and because of the demise in popularity of the traditional roast – it’s ever-more important to hit the desired market spec.

“As individual farmers we have to produce what the market wants and, as an industry, we have to shout louder about how tasty, healthy, versatile and simple to cook beef is.”

His figure-driven philosophy means Ian is a big fan of benchmarking, which prompted him to join the AHDB’s ‘Strategic Farms’ initiative, tracking and sharing data in such areas as nutrition, health and genetics in a bid to improve carcase specifications.

“Making better decisions doesn’t just bring me brings better returns, month-in month-out, but it also hopefully increases the ultimate asset value of the farm by ensuring I’m improving the land, the stock and the infrastructure,” he says.

A big fan of learning from his peers, too, Ian has drawn lessons from others enabling him to get more from his grass, introduce outdoor weaning, keep cows outside for longer in the winter and use more electric fencing.

Other cost-saving initiatives include conducting faecal egg counts rather than routinely worming and replacing mineral licks with boluses – the latter cut an annual £20/cow bill to about £5/head.

“This is one of the reasons I weigh cattle far more frequently than a lot of farmers – I do it about every four to eight weeks and especially if I’m changing something like the grazing regime so I can monitor the results.”

His wife is a big fan of the ease-of-use of the former, while the latter is proving a key tool in his armoury. “You can’t use data if you haven’t collected it in the first place,” he says.

“We record lot of data connected to calving, for example, as it’s one of our main KPIs and we’ve been able to improve calf survival, health and growth through making decisions based on these stats.

“Tightening the calving period, for instance, has enabled us to be more focused and has been genuinely life-changing.

“A few years ago, my diaries would be littered with numbers and notes connected with the stock, but they were incomplete, hard to find and often impossible to decipher. I never utilised the information properly.”

Nowadays, at-a-glance and easy-to-access information is available on every animal – everything from breeding histories and weights to medical records and TB information.

Similarly, ‘kill data’ such as prices, grades, fat classes, weights and kill-out percentages, which he gets from buyers ABP and Woodheads, is proving invaluable.

“As well as for helping hit market spec, it’s critical to collect in terms of reviewing performance and selecting future sires.

“I draw finished stock myself, doing it in small batches rather than routinely taking a wagon-load which always risks some being not quite ready and some being over.

“I’ll stay at the slaughterhouse, too, to see the animals being graded which helps me understand what I should be aiming for and helps me build a relationship with the buyer. I’m a relatively small supplier, so I’ve got to get the absolute maximum for each beast that I can.”

“Because all the information is already in the software, it saves time and eliminates the risk of me making any mistakes inputting it.

“I can print a package of paperwork which has all the info and looks really professional, which is important as I’m working hard to build my reputation as someone producing really top-notch stock, both for slaughter and breeding.

“I’m actually going down the route of selling more breeding stock, so that should enable me to become more of a price maker rather than a price taker.

“When I sell pedigree Angus bulls, I want a top-end price, so I need to give would-be buyers as much reassurance and confidence as possible and being able to provide detailed facts and figures really helps in this respect.

“Ultimately, I’d like to sell all my heifers as suckler replacements and all the males as pedigree bulls.

“If the potential prices don’t look high enough, I’ve always then got the option to sell into the deadweight market.

“I’ve seen some farms where, even though a beef enterprise looks incredibly progressive on first impressions, it’s actually still more of a hobby with a diversification representing the core business.

“We’ve diversified here – we rent out farm buildings, for example – but the beef enterprise has to make money. I’m really proud of this family farm, but we need to make it more resilient.

“As farmers, we need to focus on how we can solve problems, not just complain about the things we can’t change. My approach is to talk to as many positive people as possible, learn from them and always have end goals to work towards.

“As farmers, though, we’ve all got to get better at properly valuing our own time.  After all, I really enjoy calving, but I don’t want to be getting up to do it at two o’clock in the morning if I’m losing money. Life’s too short for that!”