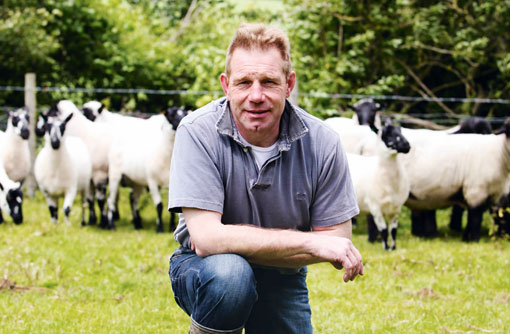 Intensive foot-rot control is a thing of the past in Ryan Haydon’s flock of 500 Beulah Speckled Face ewes.

It took this Sussex producer just three years to virtually eradicate foot-rot on his farm. His perseverance in the early days has led to less labour inputs and a healthier flock.

Thanks to strictly adhering to all parts of the five point plan to controlling lameness, Mr Haydon has driven down incidence from about 7% to less than 1%.

Eight years on from beginning his fight against lameness at South Stoke Farm, West Sussex, he believes the payback has been “phenomenal.”

“The benefits in terms of reduced lameness, improved flock health and reduced labour are almost untold,” he says. “Lameness just isn’t an issue for us anymore, but you don’t appreciate it until you come out the other side.”

In fact, it was Mr Haydon’s own on-farm experience of tackling lameness that was fundamental to the development of today’s five point plan.

Long before it was defined, he was adhering to the principals of culling, quarantining, early treatment, reducing infection pressure and vaccination.

He then pooled his experience with FAI Farm’s Ruth Clements, to formulate the action plan used today.

Mr Haydon’s own experience speaks volumes as to how the plan can be effectively used on farm. It took him just three years of intensive management before the problem was brought down to 1% or less.

However, he learnt that it was crucial to use all parts of the plan. Having just foot-bathed and vaccinated in the early days without much success, it was only once he started culling and promptly treating clinical cases as well, that the problem was brought under control.

Today, foot rot in ewes has “virtually disappeared”, he no longer sees scald in lambs, handling times have been cut and loss of productively reduced.

“We used to get problems with scald in lambs which is a pre-disposer to foot-rot. However we soon discovered once we got foot-rot under control in the ewes, scald in lambs disappeared,” he says.

“The management of the flock is now so much simpler. Lambs thrive so ultimately you will get better performance,” he says.

However, he stresses the importance of being committed to stamping out the problem, and not giving up after year two.

“The biggest pitfall is not persisting or not using all parts of the five point plan jigsaw. The key is not relenting from the core principals.”

My Haydon believes vaccination is core to maintaining low lameness levels and a strict vaccination program remains in place to build immunity to foot-rot in ewes.

However from initially vaccinating twice yearly, he has now been able to reduce this to once a year in the main flock. All replacements are given two doses in their first year.

Equally, prompt treatment of any rare cases of foot-rot will always be important, as will culling the worst offenders.

In the early days, roughly 3-4% of the flock was culled every year in the first two years because of lameness. This year, only two or three were culled for lameness out of the entire flock of 500.

“It’s important to cull hard and cull early,” stresses Mr Haydon. “Culling is crucial to remove persistent offenders from the system and retain resilient animals. By culling you get a cleaner pool of stock and reduced infection pressure.”

By reducing the pool of infection, the farm hasn’t needed to footbath ewes and lambs for five years, and now only footbaths rams.

“I maintain that anyone with the right commitment can see dramatic improvements in lameness,” says Mr Haydon.