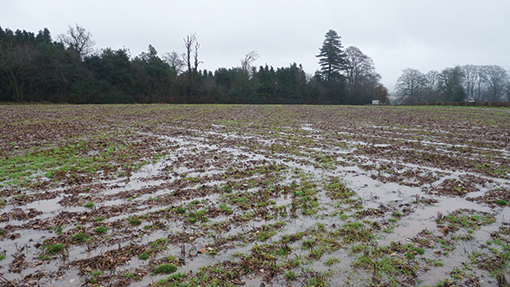 Almost 90% of soils in south-west England are suffering from poor structure, including maize land and pasture. So what can livestock farmers do about it this autumn and beyond?

Nearly 40% of agricultural soils are badly compacted across the South West, resulting in water run-off and erosion across whole fields, according to an extensive new survey.

“If the soil is in good condition it can absorb the rain, even with the high rainfall levels that we get in the South West.”

Run-off arises when the heaviest rainfall period – autumn and winter – coincides with late-harvested crops such as maize and compacted soils, particularly on slopes.

“Over 55% of cultivated sites [including grass] were associated with high or severe levels of soil structural degradation whereas less than 10% of permanent grass sites were similarly damaged,” he says.

More than 60% of winter cereal sites and 75% of late-harvested sites after maize or potatoes were badly compacted, with one in five of the latter suffering from soil erosion.

Brown sands, brown earths and loamy stagnogley soils were the most frequently damaged soils, with calcareous soils the least likely to be affected.

“Of course the weather has an important impact, but it doesn’t have to be this way,” says Mr Smith.

“We may be getting more extreme rainfall, but soils in good condition are able to cope, and I know some farmers who have made simple management changes that have led to improvements.”

Localised flooding in the South West has been particularly problematic over the past two years, devastating some communities, polluting watercourses and washing away nutrients, seeds and soil from valuable farmland. So what can farmers do to reduce the risks?

The greatest cause of poor soil structure is working it in wet – or even slightly wet – conditions. Harvesting maize, spreading slurry or drilling crops late in the autumn are the main culprits, although the impact is not always seen until later.

“It’s easier said than done, but you need to be doing the right thing in the right place, given the weather constraints,” says Mr Smith.

“I’m not saying you have to give up growing maize – although in certain places that might be the best solution.

“I’m also not saying flooding is the result of bad farming; this is about producers struggling with the economics of farming given the weather.

“Subsoiling after every maize crop may not be needed and will be costly, but there is likely to be more regulation surrounding surface run-off in the future, so something has to be done.”

The key is to bring fieldwork forward in the autumn in high-risk situations, so that it is carried out in drier conditions. Choosing early maize varieties and avoiding growing maize in marginal, wet fields will help considerably.

“If the weather is against you, don’t muddle in a crop after harvest and don’t just abandon compacted maize stubble in high-risk fields – leave it rough ploughed over the winter and opt for a spring crop instead,” says Mr Smith.

“Having crop cover can be beneficial, as long as it’s sown into good conditions.”

Assessing soil compaction by digging a hole and seeing how easily moist soil breaks apart in the hand will also help to identify the required remedial action.

“Mechanical methods include topsoil lifting, ploughing and subsoiling depending on the degree of damage and where it occurs in the soil profile.”

Many farmers are opting for minimum tillage to reduce fuel costs and improve soil structure, he adds. “But this only works if you’re drilling into good conditions – if the soil is already compacted you’ve got to loosen it first.”

Grass leys can be just as badly compacted, particularly if sown into wet soil or poached by livestock over the winter.

“Where livestock are outwintered, choose low-risk fields and later alleviate the inevitable compaction.”

“We keep hearing soil is at its capacity, but when you dig down it’s dry underneath the compacted layers.”

“Avoiding compaction is a lot cheaper than relieving it – but when it’s unavoidable act fast to address it.”