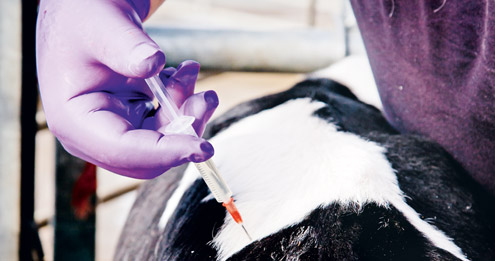 Vaccines are an important part of farm animal health, providing protection against both common and devastating diseases. But they are not infallible.

No vaccine provides 100% protection, 100% of the time, even when used according to the protocols. And too often those protocols aren’t followed, rendering the vaccine useless.

One of the commonest stumbling blocks is not storing vaccines in the fridge at between 2C and 8C, says John Macfarlane from Alnorthumbria Vets in Alnwick.

“I don’t think all farmers are fully aware of what can go wrong with vaccines,” he says.

“They are pretty sensitive and can’t be outside the temperature band for long without losing efficacy.”

Some must reach ambient temperature before use, and others have to be stored away from light.

“If the primary shot is ineffective, then none of the boosters will work either, so the animals will always be unprotected,” says Mr Macfarlane.

According to a recent survey, 34% of farmers vaccinating against BVD never referred to the data sheet. More than a fifth applied the wrong dose or used an incorrect route of administration.

Vet Maarten Boers from the Livestock Partnership says he recently discovered two farmers who were giving one type of BVD vaccine subcutaneously, when that particular brand should be given into the muscle.

“A lot of mistakes are being made, and that potentially means herds aren’t being protected,” he warns.

Farmers should check the sell-by date on any medicines, and not leave part-used vials for later use, he adds. “Once a vial is opened it needs to be used up within eight hours – you can’t keep it to use as a booster a couple of weeks later.”

Some vaccines require a primary course of two doses within a set timescale, followed by annual boosters, says Mr Macfarlane.

“A common misconception is the first dose will give some level of immunity, but it doesn’t. The first dose primes the immune system ready for the second dose, which then gives the immunity after a certain period. You really need to think ahead.”

The BVD vaccine, which is a two-stage dose, is often used incorrectly, he warns.

“As part of our practice’s BVD control trial last year, we tested 36 farms and found five were infected.”

Three of those had been vaccinating for a long time, but either failed to consistently give the second dose within three weeks of the first, or hadn’t vaccinated before the cows went to the bull.

“You only need to get it wrong one year and your cows will be unprotected for the remainder of their time in the herd,” says Mr Macfarlane.

Of course, there does have to be a practical slant to medicine use, he adds. “Medicine instruction leaflets may recommend against concurrent use of different treatments, or administration to sick or injured animals.

However, in some extensive systems gathering the stock is a major management task, so complying with that advice can present a dilemma. If not treating them today might result in them missing a vaccine altogether, it may be preferable to treat them anyway.”

A balance also has to be found in the amount of vaccines used. “You need to identify the diseases in your flock or herd and decide how best to control them.”

Farmers should draw up a health plan with their vet and keep a calendar of when vaccines need to be ordered and administered.

“Make sure your staff are trained in vaccine handling and use,” says Mr Macfarlane. “And be careful not to overwhelm your stock.

“Often farmers do foot trimming, worming, vaccinating, and pregnancy diagnosis at the same time. But some products shouldn’t be given together, and if you challenge the immune system too much it won’t be able to respond properly to anything.”

Read more articles from our Making Sense of Medicine campaign.