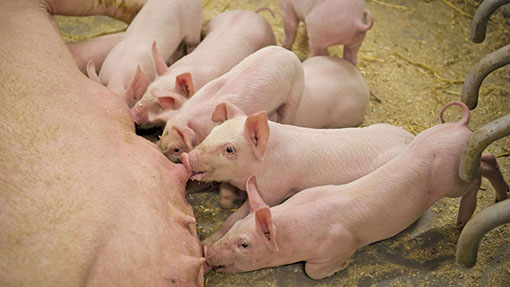 It is 12 months since the first case of porcine epidemic diarrhoea virus (PEDv) was identified in the USA and recent estimates are that it has claimed seven million pigs.

The disease has been confirmed in 30 US states and has spread to Canada, Mexico and Peru.

The disease at a glance

It is caused by a coronavirus, with very young pigs affected the most, with typical symptoms of severe diarrhoea/scouring and vomiting in nursing and recently weaned pigs. Mortality is 100% in neonatal pigs in naive herds.

In sows and gilts it is less severe, with diarrhoea and occasional vomiting, but much lower rates of mortality

Where did it come from?

Most closely related to the Asian virus found in China, Japan and Korea, where it is a seasonal disease. Officially confirmed in the USA in May 2013.

The virus is highly infectious and once one pig is infected, basically the whole herd is infected. Incubation time is less than 36 hours and virus is shed in faeces.

Transport has been implicated and the introduction of PEDv to a herd is down to faecal spread.

Work is ongoing to find the best strategy for herds already infected. Strict biosecurity is key to stopping its spread.

Bpex vet Derek Armstrong recently went to North America to see for himself the lessons being learned there. The first thing he noted was the strain in the USA is effectively a different disease to the porcine epidemic diarrhoea viruses seen in the UK since the 1970s.

“It’s is a much more severe strain and, more importantly, there is unlikely to be any cross-protection for pigs exposed to the much milder version here. It is most closely related to the virus seen in Asia.”

The US response was impressive at the start; identifying the virus, developing a test, sequencing and publishing the genome, and sharing this information.

But the ability of the US industry to contain the disease has not been impressive. In contrast, the Canadian pig industry in Ontario is working hard to contain a breakdown linked to contaminated plasma in feed and seems to be having success in limiting its spread.

One change that impressed Mr Armstrong was the speeding up of research project commissioning in the USA.

“Normally it may take six months for a research call and another six before announcing the winner, so a year typically passes before the project starts,” he says.

But it is now much more rapid. For example, one recent call for research went out with a very short deadline and the successful team was announced a week later, he says. On top of this, researchers are required to give monthly updates so any early information can be used by the rest of the sector.

Another key lesson is the importance of biosecurity up and down in the food chain. “For example, there was a bumper harvest in North America and some grain had to be stored on the ground and biosecurity was compromised at some feed mills, with trucks moving on and off units to pig farms.”

He also points to monitoring of seven different abattoirs with up to 100 trailers at each being swabbed.

“Results showed 17% of trucks were PEDv positive on arrival and 11% of those that initially tested negative were positive when they departed.”

But it’s not all bad news, Mr Armstrong believes. If everyone is vigilant, there is no reason why the UK pig industry can’t remain free of these strains of PEDv.

“The USA has a different, more severe, strain of PRRS and we have kept it out for more than 10 years.”

An outbreak of PEDv would seriously harm the UK industry and lead to the closure of export markets. Therefore, the pig industry agreed 14 recommendations drawn up at a roundtable meeting of the Pig Health and Welfare Council Surveillance subgroup led by Mr Armstrong in April 2014. They cover six areas:

Mr Armstrong says some of the recommendations have already been taken up. “The National Pig Association is working with breeding companies to update import protocols for PEDv and a contingency plan is being developed.

“It is vital we are in a position to react as rapidly as possible, as our export markets are now worth about £350m a year and if these were closed due to disease it would have a devastating effect.”