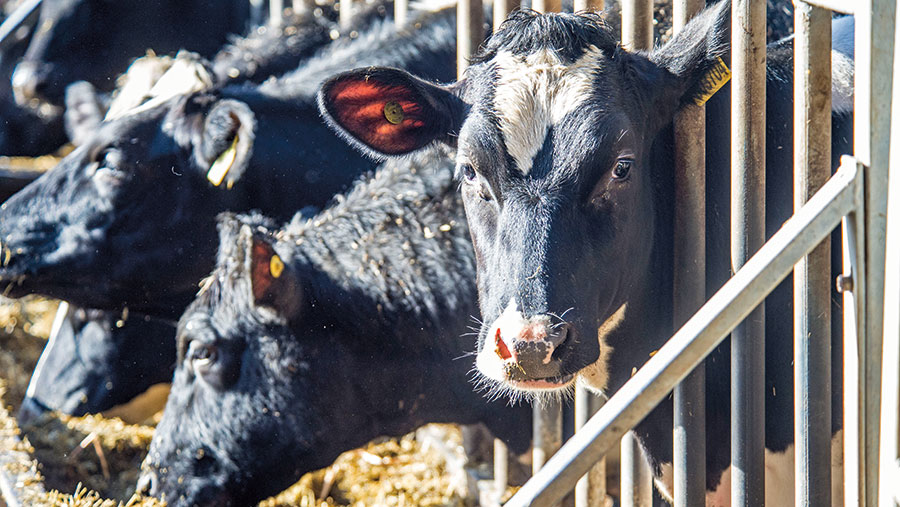 Father and son Alan and Rick Ford are making the best use of old farm buildings at New Farm, Northwich, to ensure the heifers hit growth rates of 0.7-0.8kg/day.

Being tenant farmers they are reluctant to invest thousands in new calf accommodation but have recognised the need to optimise their facilities to ensure heifers meet target weights for calving down at two – a key client requirement.

At Farmers Weekly’s second Rethinking Cattle Performance workshop (3 February) farmers were given an insight into what they’ve done to improve airflow and temperature in older buildings.

Meanwhile, Jamie Robertson, research fellow at Aberdeen University and consultant at Livestock Management Systems, suggested further cost-effective and simple improvements that could be made to the buildings at New Farm.

See also: Video: How to use a refractometer to test colostrum quality

Most calves are weaned when they are delivered to New Farm and fed a solid diet of ad-lib haylage and a home-grown and rolled cereal ration of oats and barley/wheat and an 18% crude protein calf pellet mixed 1kg cereal: 2kg pellet.

Calves are in batches of five but can be trough-fed milk replacer individually. 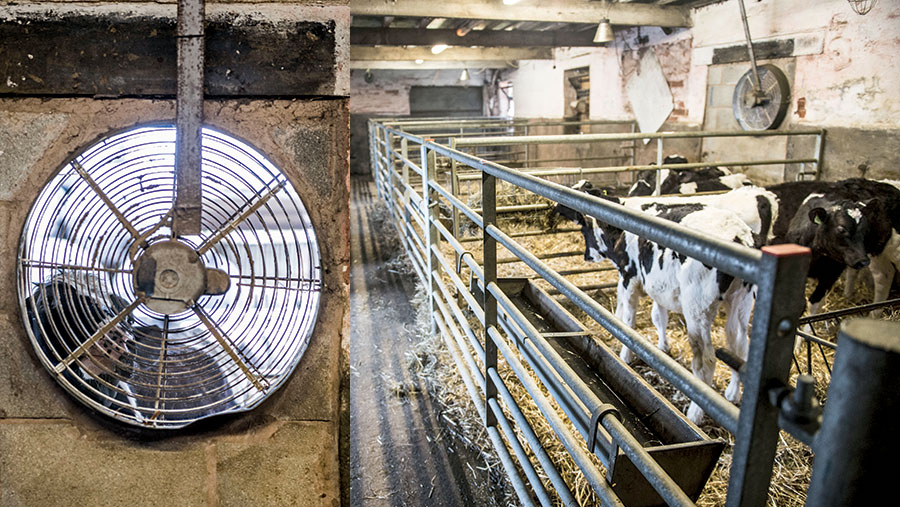 This fan draws hot air out of the building in summer and was installed when the old parlour had its cow entrance bricked up.

It runs on a timer and can be managed to get stale air out and fresh air in. 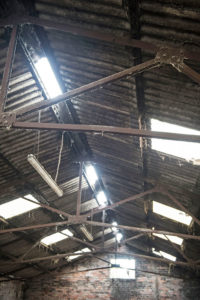 More than 20 years ago the Fords opened the roof ridge up by removing every third tile.

This has met the required outlet for the cattle in the shed.

As a rough guide, calves up to 100kg of liveweight require a ridge outlet of 0.04sq m per animal rising up to 0.1sq m for fast-growing and adult stock. 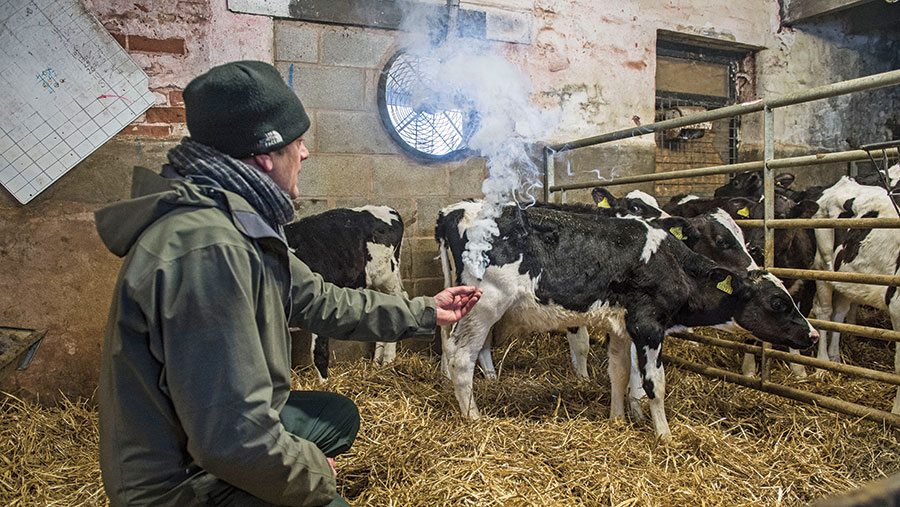 Calves require help from fans to do this on still days, but as they get beyond 120kg and dry matter intakes increase they expel enough heat from their bodies to create the stack effect.

Adult cattle and cattle with developed rumens produce sufficient heat to generate a stack effect by drawing in cool, fresh air from outside the building, replacing the warmer, moist air rising from their bodies.

Using a smoke pellet (available from building or plumbing suppliers), you can identify “dead spots” where air is still. Smoke should rise towards the ridge or outlets and be cleared from the building in 45-60 seconds.

Look at how damp the floor is and where rain may be getting in. Roof outlets are vital for driving the stack effect in older cattle but could be capped to reduce rainfall entering the building.

Critically, and an area where many farmers fall down, is having clean gutterings to prevent water from overspilling into buildings.

Stale, stagnant air is a breeding ground for bugs. Most buildings can have boarding knocked out or mesh erected to provide a controlled, fresh airflow above the height of the stock.

Buildings wider than 27m struggle to deliver fresh air into the centre of the building.

Fans help air circulate and are a worthwhile investment because most bacteria and viruses are killed 10-20 times faster if air is fresh opposed to a mix of half stale, half fresh.

Air can circulate without chilling calves at 0.2-0.5m/second, which is slower than a human’s walking speed.

Air speed impacts on the temperature at which animals burn additional energy to keep warm – known as the lower critical temperature  (LCT).

This is the environmental temperature at which an animal needs to use extra energy to keep warm).

Calves up to two weeks old have an LTC of below 15C, rising slowly as their dry matter intakes lift and they develop a rumen. However, this can increase by 9C if wind speed rises about 2m/second.

Heat lamps for younger calves can control temperature, as can calf coats. Quartz linear heaters are best for heat lamps as these don’t heat the air – only the things they come into contact with.

Deep cleaning with steam removes biofilm on gates and troughs that can harbour infectious bovine rhinotracheitis bacteria for 30 days.

However, it is important to identify which bacteria is causing infection so the most effective detergent can be used – ask your vet for advice.

Aim to clean out pens between batches, rotate teat feeders and clean with Milton and clean buckets and troughs between feeds. Straw bedding is best replenished daily.