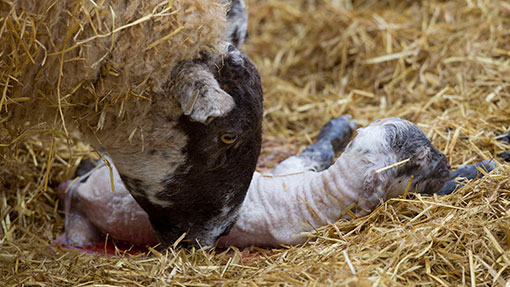 Farmers should highlight pregnant ewes in over-fit condition and take action to prevent prolapses at lambing, experts are warning.

ADAS sheep consultant Kate Phillips says following the extended autumn grazing there is a high chance ewes could be in an over-fit condition, leading to an increase in prolapses.

“While some people believe prolapse is due to genetics, it is more likely down to feeding,” she says.

What causes a prolapse?

For flocks due to lamb March-April, Ms Phillips says it is critical to body condition score (BCS) ewes now so they can be grouped appropriately for feeding arrangements.

“Feel the loin area for fat and muscle coverage (fat is soft, muscle is firm) and the backbone to see how easily the horizontal parts of the vertebrae can be felt,” she says.

Once condition scored, Ms Phillips suggests leaving over-fit ewes outside grazing for a week or two longer or brought indoors, but with the same delay on feeding concentrates.

Feeding arrangements for over-fit ewes are also important, she says: “I do not like restricting forage as it causes ewes to rush forward to eat, putting more pressure on their abdomens.

“Silage should be analysed as it can range from 9-11ME. Keep the best quality for nearer lambing and use poorer quality now,” she adds.

Vet Paul Roger of Veterinary Consultancy Services says any changes to diet or feeding regime should be made after discussion with the farm’s nutritionist and vet.

“It takes approximately six weeks to alter a ewe’s condition by one BCS. The last thing needed six to eight weeks before lambing is to reduce intake or energy density, due to the maximum growth period of the lamb,” he adds.

Premature labour can be stimulated by a prolapsed damaged cervix, leading to tears in the uterus and infection. Mr Roger says not only can this damage a ewe’s future productivity, the exposed vulva and lack of hygiene also puts other ewes at risk.

Ms Phillips says the cost of treating a prolapse or losing ewes with lambs inside is enormous.

“If a ewe cost £140, plus two lambs at £80 each, it soon adds up, and that’s without cost of rearing or attempts to treat prolapse with antibiotics or anti-inflammatories.”