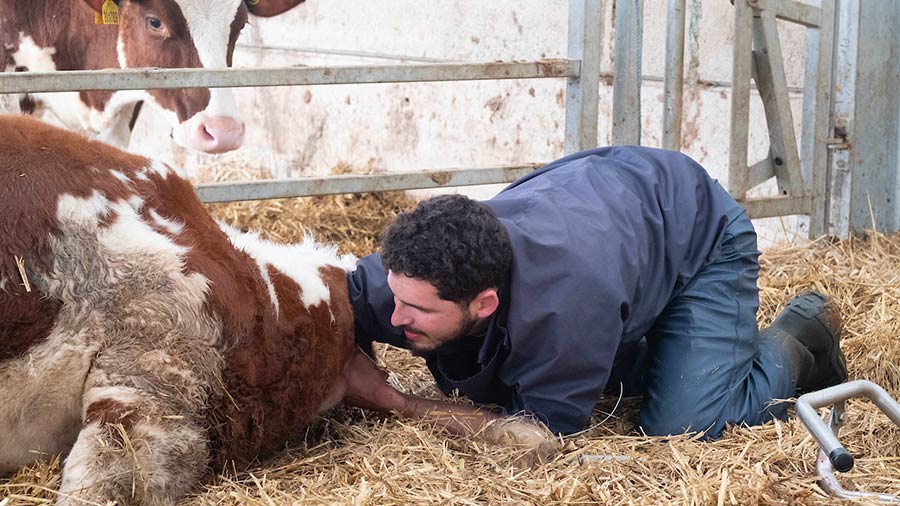 Calf deformities at birth are caused by a wide range of issues, including physical, nutritional, infectious, and genetic. Some remain a mystery.

Alex Roberts, from Garston Veterinary Group in the South West, looks at some of the more common deformities and how to manage these animals calving and what considerations need to be made post-calving.

One of the most common deformities, flexor tendon contracture is when the calf has an inability to fully straighten one or more of its joints (most commonly fetlock or carpus). One or multiple limbs can be affected.

Most are caused by malpositioning or overcrowding in the uterus, generally with a large calf or twins.

In rare cases, it can be genetically inherited and linked to other deformities including cleft palate, dwarfism, and arthrogryposis (legs twisted and fused at unusual angles). It is therefore worth examining to check for these other abnormalities.

Your first step should be to check if the calf is able to suckle, particularly if they’re struggling to walk, and supplement with a bottle or tube feed, if necessary.

Early treatment is essential, as the contracted tissues become less responsive to being stretched over time. Make sure the calf is on adequate bedding to reduce skin abrasions and call your vet to discuss the best treatment. A splint or cast may be necessary, depending on severity.

Calves appear tiny as they’re born with very short legs, sometimes bow-legged, along with a domed skull and dished face. It is mostly seen in beef calves, either at the end of spring calving in April or in October.

It is caused by manganese deficiency and occurs in pregnant cows fed solely on silage (cattle overwintered on silage), especially good-quality silage.

Rather than poor intakes of manganese, the problem is thought to be something else in the silage reducing absorption of manganese once eaten.

Organic farmers can be at particular risk if using silage with a high level of red clover. The highest risk period is when the cow is four to five months in-calf, as this is the key stage of growth of the foetus’s long bones.

First, ensure the calf can stand and suckle. In rare cases, calves with dwarfism can also have heart defects, therefore, it may be worth getting them examined. If the calf is able to walk, the prognosis of survival is good.

Options to prevent problems in the future include: 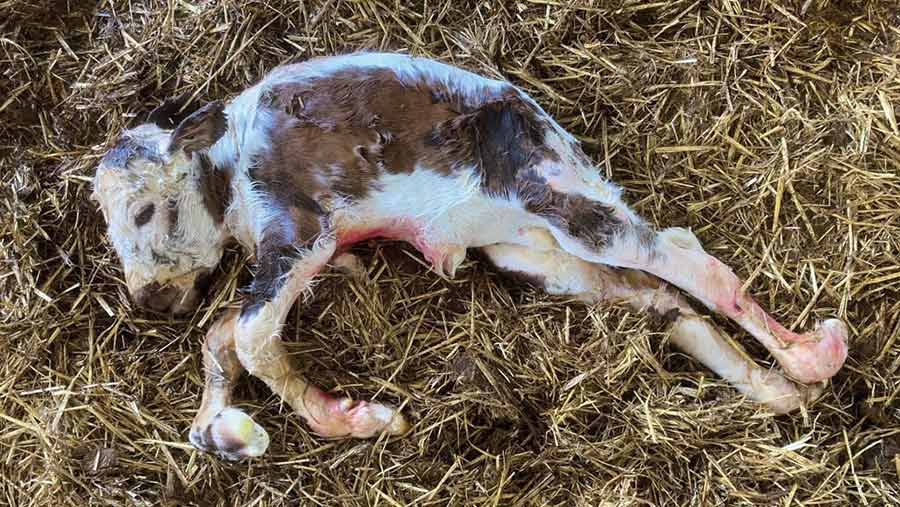 Calves can be born either alive or dead with legs twisted at unusual angles and rigid due to fused joints.

There are multiple possible causes including:

These calves can pose challenges at calving if the legs are fused at the wrong angle (see “How to ensure a successful delivery” for how to deliver the calf).

Unfortunately, the deformity is irreversible, and euthanasia is advisable.

How to ensure a successful delivery

If a leg is fused at an unusual angle and you’re unable to correct it or no progress can be made with steady traction then call your vet, as an embryotomy (cutting up the calf inside the cow) or caesarean may be required.

These are the most extreme deformities you will be faced with at calving. The spine is folded backwards, causing all limbs to face towards you, with fused joints and unusually bent limbs like arthrogryposis, described above. The abdominal wall has failed to close, meaning the abdominal contents are loosely hanging behind.

It is not known why it happens yet, other than that it’s a rare genetic defect. In some cases, it’s been shown to be inherited (a couple of cases in the same herd all from the same sire line) and it has a slightly higher risk of occurring with twins.

If you suspect one of these then call your vet immediately.

BVD is a viral disease that can cause reproductive and respiratory issues in cattle.

If a naïve cow is infected during 90-150 days of gestation, she may give birth to a deformed calf. These calves have domed heads, an underbite, and tend to be very wobbly and unable to stand due to an underdeveloped part of the brain.

It is highly contagious and can be spread directly by infected animals (persistently infected) or indirectly through contaminated visitors and equipment.

If an unborn calf is infected between 30-120 days of pregnancy that animal will become a persistently infected (PI) if it is not aborted.

Unfortunately, the damage is irreversible, and euthanasia is advised.

A BVD investigation and PI hunt should then be considered to reduce further losses.

Calvings involving deformed calves have a higher risk of post-calving complications. The following checklist is useful to follow:

If you have any concerns about the cow and the calf, contact your vet for further advice.