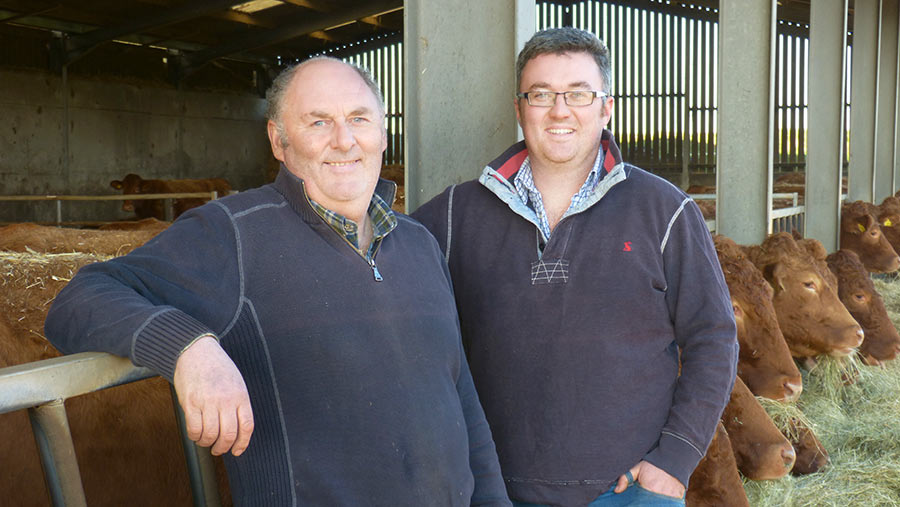 A change in youngstock management has allowed a Cornish farm to maximise growth rates and reduce age at first calving to two years.

The Rowes, who run a 140-cow South Devon herd at Trewint Farm near Menheniot in south east Cornwall, used to calve at three until just four years ago.

Peter Rowe and his son Ashley, who farm in partnership, use easy-calving Red Angus bull on heifers to make the transition to younger calving easier.

“We’re getting a calf out of the animal earlier, rather than running it for another 12 months” explains Ashley.

The Rowes’ breeding objectives are to produce a docile, easy-fleshing, uniform herd with good udders and feet, which is helped by their low 17% replacement rate.

“We do get cows giving us 10 calves or more, but we don’t hang on to those with udder or feet or fertility issues,” says Peter.

Most males are kept entire but only eight (13%) are kept for breeding. The rest are finished on a barley ration.

A focus on uniformity is paying off. When the herd had its pelvises measured as part of a South Devon Herd Book project, the variation was minimal.

Bulling lasts for 12 weeks, starting in May for heifers, meaning heifers calve slightly ahead of the main herd and have more time to recover after their first calving.

To make sure heifers cope with the pressure of calving at two years old they are kept as a separate management group until their third calf.

“This is important,” stresses Peter. “Heifers get the best of everything – silage and grass.”

All females calve for about 12 weeks, starting in March to early June. The last 30 cows calve outside and are strip grazed behind electric fencing. 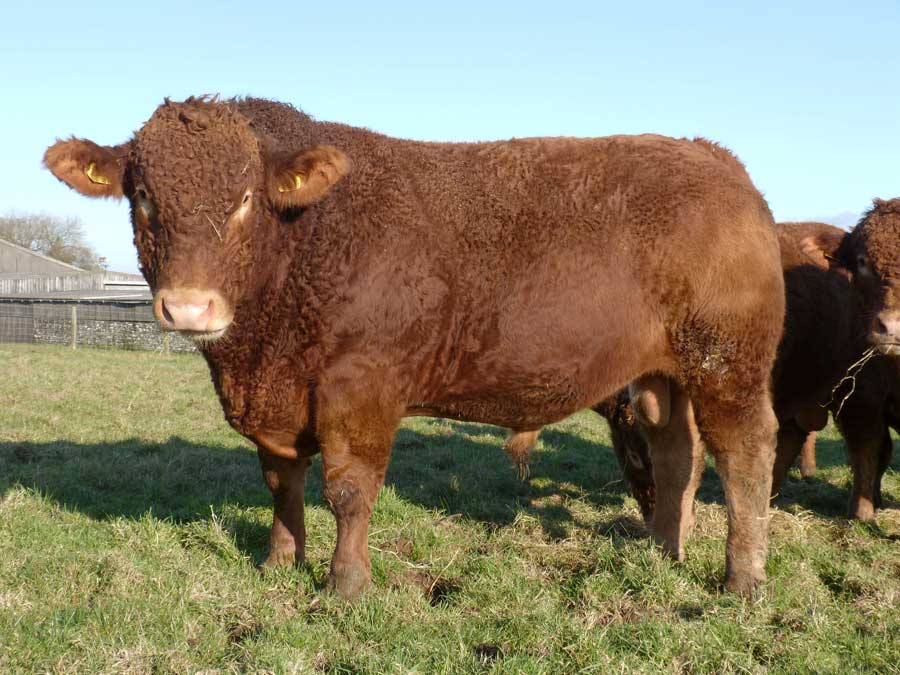 Only 13% of bulls make the strict breeding criteria

Myostatin (a protein that regulates muscle growth) is present in all breeds but in some – like the South Devon – it can be switched off.

For this reason, all bulls are genotyped and DNA-verified as calves, which allows bulls to be tailored to cows.

There are nine myostatin variations in the breed, but the most common are F94L and nt821.

Bulls are classed as 0 or 1, with 0 equating to the F94L gene and generally meaning relatively easy calving, and 1 being the nt821 gene, which generally signifies higher birthweights (+2kg) and more difficult calvings.

“All our bulls are genotyped and bought with figures so we can monitor this,” explains Ashley. “It’s not as simple as selecting zeros all the time for easy calvings as you would end up with smaller cattle. Ones can be used with care on older or bigger cows.” 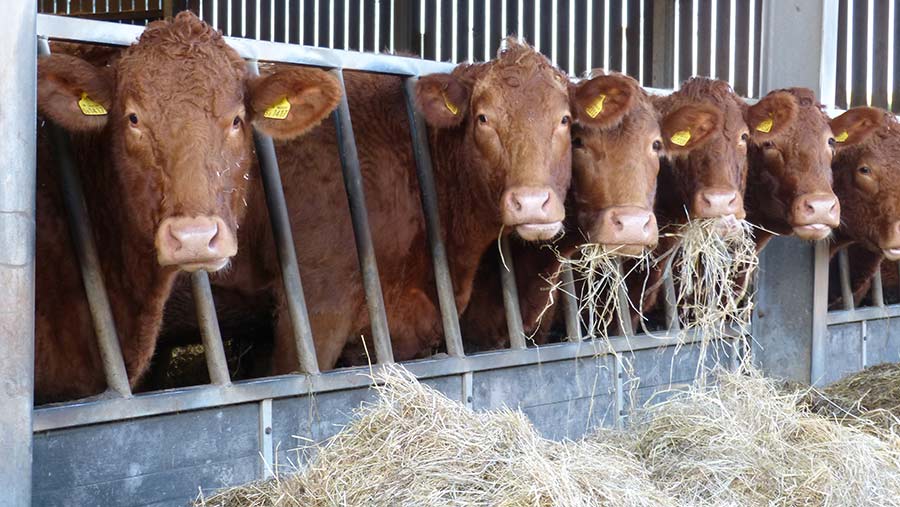 Cows are simply wintered on hay and minerals

First spring
• Calves are rotationally grazed around the farm typically from a mid-April turnout
• Since starting calving at two, heifer calves are creep-fed from July/August. Feeding is built up to ad lib.
Weaning
• All calves are weaned, weighed to assess growth rates and housed for winter. Heifers are treated as one batch and fed on 3kg of crimped barley, with protein from soya or beans, first-cut silage and minerals. Barley is increased to 5kg by January.
• First-cut dates have been brought forward three to four weeks to mid-May to improve silage quality
• Last year’s first cut analysed at 75 D-value, 13.7 crude protein, and 12.1 MJ/kg, which was prioritised for growing heifers. Mature cows are wintered on hay and minerals.
Second spring
• Heifers are turned out and graze just grass
• The best 25 heifers are shortlisted from the first six weeks of calving, ensuring they are the oldest/biggest but also bred from the most fertile cows which were in calf first
• Heifers are then bulled for 12 weeks in May if they reach 460kg (65% of an 800kg mature weight) meaning they need to hit daily liveweight gains of 1kg/day
Second winter
• Heifers are wintered on first-cut silage and minerals only. A straw blower is used to bed up stock every day, allowing heifers ample barley straw to pick at.
• Heifers are pregnancy checked in December. This year, 24 out of 25 were in calf.
• A section of five animals (five from each management group) have bloods assessed for trace elements. The farm is generally low in iodine, which can be applied via a pour-on through the winter.
• A colostrum booster is given six weeks pre-calving to all females to gives calves a good start
Calving
• Heifers calve in a shed closest to the house for easy monitoring
• Rations are gauged to leave females at a body condition score of 2.5 to help with calving
Second summer
• Heifers remain in a separate group through the summer so body condition can be monitored closely. Angus-cross calves are creep-fed earlier to take pressure off heifers.
• Heifers are weaned a fortnight earlier than the cows