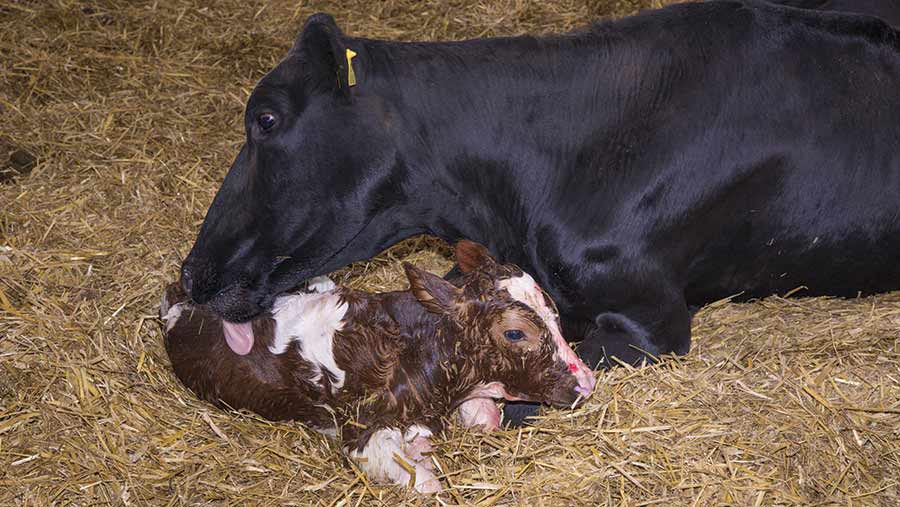 Implementing strict calving protocols has helped US dairy farmer Don Niles reduce stillbirths from 24% to less than 2% on his 2,800-cow dairy.

The vet, who is now co-owner and manager of Dairy Dreams in Wisconsin, explained to delegates at Total Dairy last week (4 July) that the philosophy was to provide cows with care equal to that on a maternity ward at a hospital.

“It’s not how many cows you have, it’s how you take care of those cows,” he said. “The way we are going to be judged by everyone is the care we give to the animals that need the most care at the same time.”

He said farmers running large herds needed to find the cows that required the most help and attention, such as fresh cows, sick cows and calves, and have systems in place to take “exquisite” care of those animals.

Stillborn rates in US dairy herds currently average 8% but Dairy Dreams was achieving much lower rates than this by striving for zero, he said.

“We are striving for perfection knowing we don’t achieve it but in pursuit of perfection we hope we will be above excellent,” he said.

He explained how this was achieved:

One member of staff works on the maternity unit in eight-hour shifts.

He said this was “just about perfect” to cope with the average eight to 10 cows calving daily.

“But that’s herd-size sensitive. Staff it appropriately,” he said. “Find that person other things to do but keep them in contact with that department.”

Staff receive a bonus based on results.

The maternity unit has one side of cubicles for pre-calving cows, with heifers and cows kept separately.

A drover’s lane at the back of the cubicles allows animals to be moved at the point of calving into calving pens on the other side of the shed.

A gate at the feed face of the calving pens allows one member of staff to lock cows into a yolk.

Fresh cows are checked every 30-45 minutes and won’t be moved into calving pens until the animal is fully engaged with feet showing, to prevent a delay in labour due to stress.

Staff wear two gloves; one to wash the area with soapy water and another underneath to check the calf’s position. Checking early allows time to correct the position before the animal becomes fatigued, says Dr Niles.

Cows are left to calve unassisted unless they have made no progress within half an hour.

Each member of staff gets their own calving box to keep calving equipment in, and this is locked at the end of their shift.

Before this they had a lot of colostrum meters getting lost, so they now charge staff.

They also regularly check equipment is being kept clean.

Only enough straw is used in each calving pen for the birth, then it’s removed and the pen cleaned out for the next animal.

Calves are towel dried and put in a wheelbarrow over a weigh-scales to record birthweight.

Cows are given oxytocin and are milked in the calving pen using a portable machine. The calf receives four litres of fresh colostrum off their own dam within 20 minutes. Colostrum is measured with a refractometer.

“Our policy is to get the calf safe and sound away from being stepped on as quickly as possible,” Dr Niles said.

They have procedures in place to investigate dead calves.

They are clear on what stipulates a live calf, so no blame can be attributed between staff on the maternity and calve units.

“A calf that stands for colostrum counts as a live calf,” he said. “A DOA [dead on arrival] is an event that needs investigating.

“If we find a mistake we are not going to fire that person on duty, but we will learn from it.”

Cameras are used and post-mortems are carried out as part of this process.