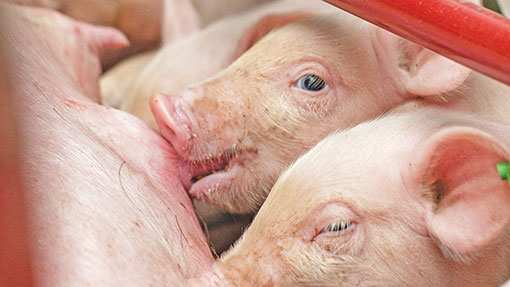 Denmark is leading the world when it comes to pig herd performance with Danish farmers producing on average four more weaned pigs a sow a year than in the UK.

The Danes put part of their success down to the country’s pig breeding setup, with all pig breeding managed by the Pig Research Centre (PRC) under the DanAvl brand.

At the heart of this breeding success are robust objectives and transparency – breeder farms are performance ranked weekly in order of their animal’s genetic value.

Søren Balder Bendsten, breeding and genetics team leader at the Pig Research Centre, says feed conversion ratio is the most important trait because of its economic contribution – even in the dam lines.

This is followed by litter size and daily weight gain between 30-100kg in boars.

“Our main goal is to maximise profit in the slaughter pig under Danish conditions by increasing income or reducing costs,” he says.

Each nucleus breeder selects their own best females to be AI’d by DanAvl boars.

Top-performing boars from all nucleus farms are DNA tested before being sent to AI stations, but due to constant genetic improvement, many only remain there for five months. Semen is supplied to any herd, but the number of litters fathered by each boar in a nucleus herd is limited to reduce inbreeding.

Next are the 125 multiplier farms, which produce hybrid production sows (Landrace cross Large White) from the nucleus purebreds and sell these to commercial herds.

The breeding system is managed by the Danish Agriculture & Food Council’s PRC, which has a board of 12 pig producers who decide on breeding strategies, objectives and traits. PRC researchers confirm the breeding objectives, before DanAvl manages the breeding with independent farming partners.

Breeding and multiplier herds in DanAvl are contracted to the PRC and must follow their comprehensive set of rules. The system is open to all who can follow the rules and weekly ranking encourages healthy competition between all involved, ensuring optimal herd performance.

Tom Østrup, commercial pig producer:
‘A team with the right attitude is vital to success’ 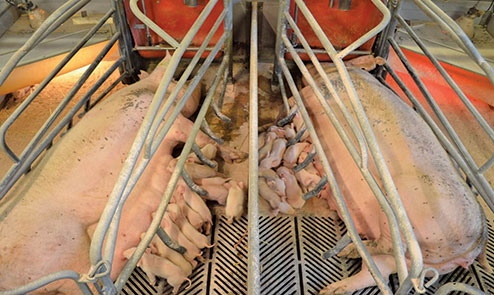 Tom Østrup is a commercial pig producer averaging an impressive 35 piglets a sow a year.

Spreading production over two sites nearly a mile apart to reduce disease risk, he is one of the top 15 commercial producers in Denmark.

Benchmarking against other farms is a good motivator, he says.

And he believes both teamwork and attention to detail are behind his success.

“The right team with the same high ambition and due diligence is more important than which country they’re from.

“If something needs doing at the end of a shift it must be done, for welfare reasons.”

He has breakfast with his Ukrainian and Danish employees every day and weekly meetings to look at performance results and discuss any changes.

The key is to set the targets at achievable levels so not too many red numbers are on the board, says Mr Østrup.

“If a target hasn’t been met, we find a new way to work towards it by the end of the meeting,” he adds.

They are quarantined for six weeks in accordance with specific pathogen free (SPF) rules and if there are any problems, €10 (£7.90) a gilt can be paid in insurance.

“They come in at 12-14 weeks and we use the six weeks to vaccinate and prepare them. The biggest ones are ready to breed after this and are sent to site one.”

By quarantining gilts on site two, the risk of spreading disease to the sows is minimised.

“We have to do all we can to protect what we have, disease is a very big concern in Denmark.”

Sows and gilts are kept in stalls for four weeks after AI to prevent bullying of weaker sows and gilts. Once scanned in-pig they are moved into loose housing before being transferred into farrowing crates a few days before giving birth.

“I use a system of one piglet per available teat and many have 16 teats, not the standard 14 piglets a sow as is done on many Danish farms,” says Mr Østrup.

And with 80% of sows farrowing 14-17 piglets a litter, slats in the crate sloping at 45deg towards the sow’s head help prevent damaging teats, which is vital in rearing the maximum number of piglets.

Every night between 8pm and 1am the farrowing pigs are checked and farrowing cards updated.

“We’re saving piglets every week because of these extra checks,” says Mr Østrup.

Creep feed is introduced at seven days old and the piglets are weaned at 27-28 days old weighing 5-6kg. Any piglets smaller than this are put into a nursing box for another week.

The weaned pigs are moved to site two where they take seven weeks to reach their sale weight of 30kg. Mr Østrup sells between 400-500 pigs a week to other Danish producers for finishing.

Per, Mads and Birgitte Kring, breeding centre
‘Driven by genetics, focused on biosecurity’ 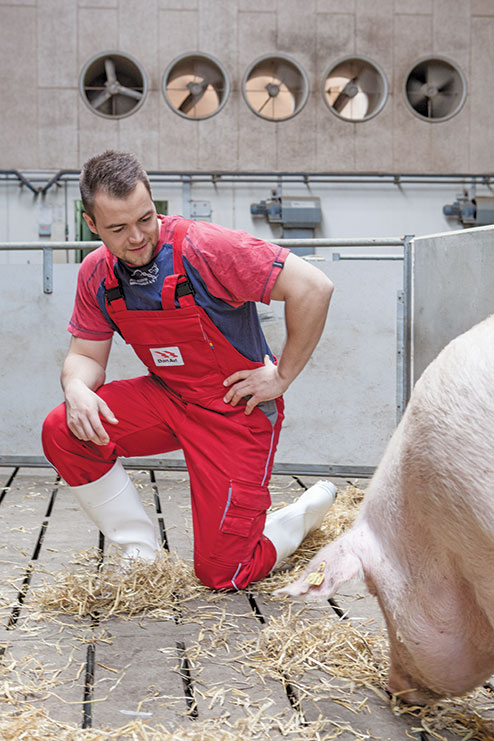 The 24,000sq m site owned by Per, Mads and Birgitte Kring, also houses a multiplier herd ranked fifth in the country, which produces more than 20,000 hybrid boars and gilts a year for sale to commercial farmers worldwide.

It is ranked within the top eight of Danish nucleus farms for the genetic level of all three purebreeds and has held the Duroc breed top spot for 14 consecutive years.

“Customers who receive regular delivery on gilts from our breeding centre yield up to 35 pigs a sow and our boars [weighing] more than 90kg have a daily liveweight gain of 1.1-1.2kg,” explains Mads Kring.

“About 20% of the semen delivered by DanAvl is from our boars and as of summer 2014 we have 750 boars in AI stations worldwide – one in four pigs produced in Denmark is carrying our genes,” he adds.

At the breeding centre, the focus is on breeding high-ranking animals, but genetics aside, Mr Kring also believes that their success is due to the many highly capable employees and their high health status.

“Genetics is the driver, but biosecurity is paramount. Without good management, high genetics is nothing,” he says.

Built in a valley and surrounded by woods, the nearest pig farm is 3km away, which has helped maintain the farm’s Red Specific Pathogen Free (SPF) status – the highest possible level.

However, it is the meticulous approach to disease prevention that has kept the farm at this level for the past 20 years, with all farm visitors following a strict protocol.