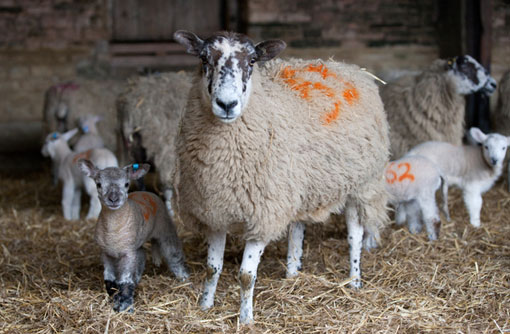 There are a number of other controllable diseases that can impact sheep businesses and vet Peter Aitken from Westpoint Vets says it’s vital to establish whether these diseases exist in the flock so any future losses can be mitigated.

“Many farmers were worried about Schmallenberg, but in some cases of abortion or low scanning rates, there is likely to be something else going on, such as enzootic abortion or toxoplasmosis,” he comments.

“If you don’t know your enzootic abortion or toxoplasmosis status, do something about it.”

“If you don’t get on top of these other diseases, then you could have losses from Schmallenberg with enzootic abortion and toxoplasmosis on top of that,” explains Mr Aitken.

It may be too late to vaccinate against abortion this season, however analysis of abortion material and recording losses will be critical to establish the cause and to allow an effective control plan to be implemented to prevent losses next season.

Schmallenberg will still pose a problem for many producers this coming lambing season, and consequently many shepherds will be faced with some difficult lambings.

But how should you deal with a deformed lamb? Vet Peter Aitken runs through how to deal with these cases to reduce the likelihood of damaging a ewe:

Recording events at and around lambing offer clues to why losses are happening. The EBLEX Better Returns Programme suggests five key measures that will indicate where the problems lie:

1. Ewes tupped The total number of ewes/ewe lambs put to the tup.

3. Lambing percentage The number of lambs born alive divided by the number of ewes put to the tup, multiplied by 100. When compared with lambs scanned, this indicates how many lambs have been lost during pregnancy. This can highlight health problems such as infectious abortion or nutritional deficiencies.

4. Lambs turned out When compared with lambs born, this shows how many lambs are lost during the first days of life. A fall in numbers could indicate underlying health problems, hygiene issues or problems with colostrum intake.

5. Rearing percentage The number of lambs reared divided by the number of ewes put to the tup, multiplied by 100. Comparing rearing percentage, or lambs weaned/sold, with lambs turned out, gives an indication of mortality during the lambs’ first few months. These losses are more likely to be related to health problems such as inadequate control of worms and infectious diseases.

Where ewes lamb outdoors, “lambing percentage” and “lambs turned out” may be replaced by a figure for “lambs tailed”.

When a sheep aborts, isolate it and send abortion material to your vet.

Ensure the material is as fresh as possible and representative of typical abortion seen on farm.

Treat all material as hazardous – it may pose a risk to human health.

Place material in a double bag, tie it up and store in a plastic container.

Vaccinating against toxoplasmosis and exposure to Schmallenberg last year may well have protected William Hurley from a surge in lamb losses this year.

Mr Hurley describes an increase in abortion levels in the run-up to lambing last year as a “wake-up call” to the importance of vaccinating replacements.

“We used to vaccinate all our bought-in replacements for enzootic abortion and toxoplasmosis, but due to a shortage in vaccine availability one year, we let it lapse,” he explains.

The flock of 720 mainly Mule ewes usually experiences abortion levels of about 2%, but last year this rose to about 6%. At the start of 2012, Mr Hurley was beginning to hear reports of Schmallenberg in early lambing flocks in Sussex, but hoped he would be protected by lambing later in March.

However, in the 10 days before the start of lambing, he suddenly had three twin-carrying ewes abort. “Two out of the three tested positive for both Schmallenberg and toxoplasmosis,” he says. “However, we never saw any lamb deformities.”

This year, the farm has gone back to vaccinating all replacements against toxoplasmosis as an insurance policy, with the flock scanning at 185% and less than 3% barren.

“There’s no vaccine for Schmallenberg so, by vaccinating against toxo, we’re protecting against what we can control,” Mr Hurley says.

“I would advise all sheep farmers to get any abortion material tested and if it shows things that can be vaccinated against – vaccinate.”