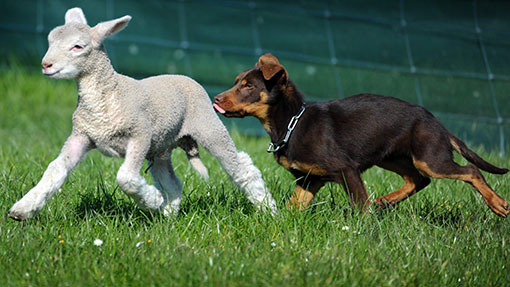 Two dogs were seen attacking the terrified sheep in a field at Methleigh Farm, Methleigh Bottoms, in Helston.

Farmworker Ben Coleman found the sheep being attacked by a black collie and a small, brown mongrel at around 6.15am on Monday (28 April).

He discovered the dogs savaging the lambs and chased them, but they ran out of the field.

Police said nine newborn lambs, valued at around £40 each, were killed and a further nine were taken to the vets with various injuries. A further three had to be put down.

Helston farmers Hugh and Sally Dawson told local newspapers that the attack had left them feeling “devastated”. The farm had just finished lambing.

Devon and Cornwall Police said they had managed to locate the dogs and spoken to their owners. However, no arrests have been made.

A spokesman urged dog owners to keep their dogs on leads when walking near sheep.

Anyone with information on the attacks is urged to contact PC Richard Wearne by dialling 101.

It is the second extremely serious sheep worrying incident reported in the last week. Sheep farmer James Bourne lost about £1,500 worth of sheep after dogs attacked his sheep and newborn lambs at Ty Dda Farm, near Pontypool, south Wales.