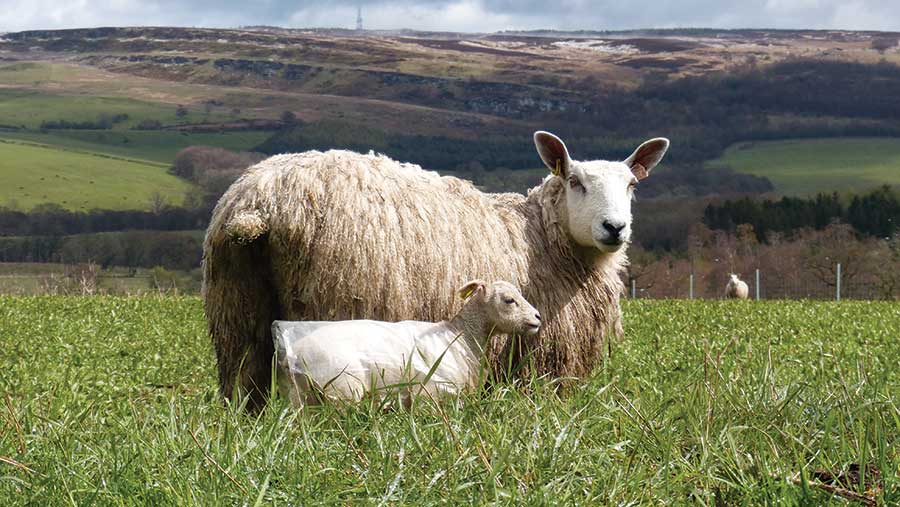 The 1,300 ewes at Lemmington Hill Head Farm, Alnwick, are benchmarked against a range of criteria to improve productivity.

The target is to produce ewes that are capable of weaning 1kg of lamb to every kilo of ewe mated at 12 weeks.

In order to achieve this and help increase overall productivity the farm has adopted a three-tiered approach by:

Changing from a traditional stratified system to using a smaller Aberfield sire is working for the father-and-son partnership, with the maternal Aberfield outperforming the former terminal Suffolk-cross put to a Texel.

“We have already seen twins averaging daily liveweight gains [DLWG] of 410g a head a day to eight weeks, so ewes are rearing 820g a day,” explains James, a Nuffield scholar. “This is from a smaller, 65kg ewe – allowing us to increase our flock size and output a hectare.”

This performance compares well with the Suffolk-cross twin-carrying ewes, which were 20kg heavier, and reared 700g of lamb a ewe a day when adjusted for losses, explains James. This isn’t all down to breed but to management too.

“Aberfield genetics have been scrutinised much harder on the farm,” he says.

“This means average ewe output is at 58kg at 12 weeks, so ewes are rearing 90% of their weight,” says James, although he targets in excess of 100%.

Breeding from ewe lambs is another way the Drummonds are increasing output a ewe. This was not possible from the late-ovulating Suffolk-cross, but it is now a major consideration when selecting for replacements, following a change in genetics.

The new output target requires lambs to reach 42kg by September and to hit 51kg (the average obtained last year) at tupping in mid-November, before reaching an average of 59kg one month before lambing, when ewe lambs are given a clostridial booster and a liver fluke dose.

Outdoor lambing is practised to remove some housing costs, with stock loose-housed at night. This year’s cold spring meant plastic lamb coats were used to prevent mortality creeping up during the inclement weather.

At a cost of 15-16p a coat, James says that if they save three lambs they have paid for themselves, even if 1,000 coats are used.

A five-year transition period has been in progress at Hill Head, which has seen selection pressure ramped up to take genetics forward – although this was not always the case, admits James.

This transition is essential to improving the farm, explains James, who has also reviewed soil and grassland management to boost gains from forage.

“Selection pressure was hampered hugely at each end of the old stratified system,” he explains. “The Cheviots on the severely disadvantaged area (SDA) land we have were not prolific enough to justify increasing numbers to help selection pressure and the terminal Suffolk-based flock were 85kg sheep, which reduced stocking density and output a hectare.”

Previously, the Drummonds ran a total of 850 sheep split across a Cheviot hill flock, a maternal Scotch half-bred flock and a terminal Suffolk-cross, although James concedes this was often falling short of the mark both in terms of productivity and in the mart.

“Border Leicester-sired wethers were £9 back on the Texel-crosses and Suffolk-crosses were £5 back,” he says. “Since becoming involved with the Aberfield we have seen lambs about match the Texel for price and finish six to eights weeks earlier.”

Further monitoring – namely, breach and dag scoring and faecal egg counts (FECs) – is carried out as part of the Drummonds’ involvement with the Innovis breeding programme.

James views breach and dag scores as “connected traits”, with one often affecting the other, although he acknowledges some lambs can have really poor dag scores and good breach scores and vice versa.

“We use a simple ‘1 bad, 5 good’ scoring system on the ram lambs to complement FEC scoring in the ewes,” he explains, hoping to have enough 5s to select from and fatten the rest.

A really clean breach with barely any cover would score a 5, working down to a 1, which is a straggly breach with long wool cover and covered in muck, adds James.

Faecal egg counts are taken after a 12- to 16-week challenge on pasture in the summer, with a huge variation in egg counts ranging from zero to 1,600 eggs in 2015.

“All ewe benchmarking is aided hugely by the fact that we EID-record all lambs,” says James. In the future, he hopes, a combination of breach, dag and FEC scoring will decrease flock maintenance by reducing fly strike, pasture burden, wormer usage and time spent dagging.

Rearing performance is gauged from a combination of DLWG to eight weeks, weaning weight, time to slaughter, mature weight, feet and BCS maintenance. An auto-drafter then has the final say, selecting potential replacements on ewe performance and physical lamb information, which is fed into a software system.

Only the top 20% of the Aberfield-cross flock are kept on this criteria, explains James.

The Drummonds crossed their last Cheviot gimmers in 2014 and reared the last Suffolk-crosses in 2015.

Ewes are expected to perform off rotationally grazed pasture and brassicas and silage in the winter and progeny are finished on forage-only diets, with Aberfield-cross lambs grading at 65% R, 25% U and 10% E on average.

Two mixes of plantain and legumes are providing close to 20kg DM/ha/day, which James says almost rivals the red clover and high-sugar grass mix on the farm. They are:

Pasture measuring was brought in to increase permanent pasture productivity. The farm is set stocked at lambing, rotating from May and monitoring grass growth with a specialist dairy stick for new leys and a New Zealand stick from Massey University to monitor plantain and legume growth.

Winter feeding for ewe and ram lambs is provided by brassicas (1.75kg:0.5kg kale to stubble turnip mix) drilled into “sacrifice fields” that have been trashed in the previous winter, seeing sheep ring-fed silage.

“Trashing sacrifice fields is a key part of the grazing plan,” says James, whose target is to build covers of 1,800-2,000kg DM for lambing.

“When trashing a field in winter we feed 11.1ME red clover silage, a good mid-gestation feed, allowing the rest of the farm to rest.”

James says that, in the early days, turnips established first and smothered the kale, so they have reviewed the mix to allow more than 20% of the crop to be kale.