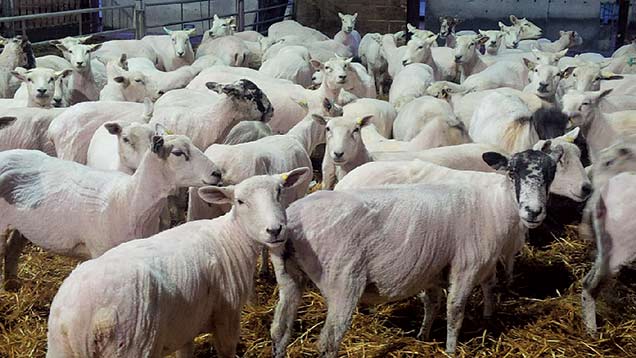 Didling Farm’s flock manager, Matt Blyth, has seen a marked improvement in lamb weights and survival since he started shearing ewes before lambing five years ago.

The indoor lambing flock of 1,050 Lleyn ewes are shorn in mid-January at the point of housing, eight weeks before lambing starts.

“Once indoors the ewes quickly settle as they don’t struggle with varying temperatures in the building.

“Feed intakes don’t drop in warmer weather, as the ewes don’t suffer from heat stress and when it’s cold they eat the same amount as the unshorn ewes did, but produce lambs with about 25% higher eight-week weights.”

“There are no long strands of wool for the lambs to accidentally suckle. They go straight on to the teats, getting antibodies straight away, which I believe helps build their immunity.”

Mr Blyth says he has seen no increase in the number of abortions since shearing ewes.

The advantages of early shearing also continue once the ewes and lambs are turned out 36 hours post-lambing, says Mr Blyth, even if the weather is cold and wet.

“In these harsher conditions, ewes will look for shelter to protect themselves and naturally draw the lambs with them. Instead of lambs huddled up in the hedge and unshorn ewes happily out grazing, the lambs are mothered, which increases lamb weights,” explains Mr Blyth.

Mr Blyth says it is easier to find a shearer in winter, as they’re not fully booked like during spring.

Housing the ewes on a set date also helps with grassland management as remaining grass can be left to grow without sheep damaging the sward, he adds.

The benefits can also be seen in the spring, he explains: “If fly strike becomes a concern, early shorn ewes have sufficient wool growth to apply preventative or treatment products immediately, removing the uncertainty of when to treat if they’ve not yet been shorn.”

1. Once all ewes are housed for winter (mid-January) allow them to settle for two to three days.

2. Body condition score (BCS) ewes – only those with BCS 2.5 or over should be sheared. Any scoring below this will find feeding lambs at turnout too stressful if they’re shorn.

3. Shear them using combs which are wider and with fewer teeth than standard ones. These leave two to three weeks’ wool growth on the ewes, which protects them against rubbing when housed and offers more insulation at turnout. Standard combs become stuck as the ewes’ lanolin is still close to the skin at this time of year.

4. Once all ewes are shorn they are scanned, this saves having to mark unshorn ewes twice.

5. Shearing must be completed at least six weeks before lambing, or there will be too much stress on the ewe as lamb growth is highest after this point.